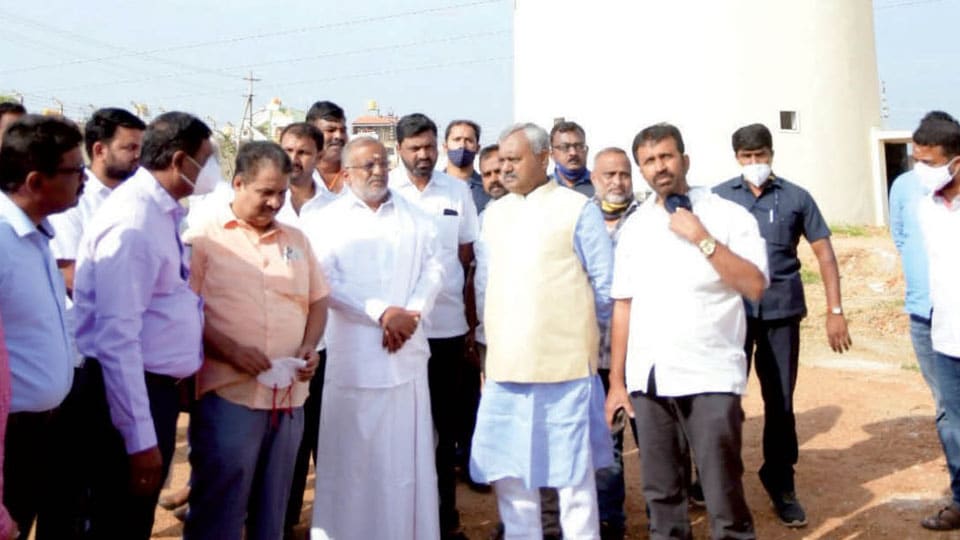 District Minister goes on an inspection-spree

Somashekar first visited the 13 MLD capacity overhead tank built in Vijayanagar Fourth Stage for supply of water to the residents of the locality. As the officials explained that the height of the pumping motor fixed at the site was posing a problem for water supply, the Minister directed them to lower the level of the pump in accordance with the requirement. He asked the officials to finish the civil works needed for the purpose in a month.

After the inspection, the Minister interacted with members of the public, during which Vijayanagar residents poured out their grievances. The residents complained about indiscreet dumping of construction debris and other wastes along the Ring road passing through the layout, overgrown bushes and trees along the road which has posed problems for motorists, potholed roads and many other civic issues concerning the locality.

The residents also complained about the missing link of the huge Under-Ground Drainage (UGD) near Aishwarya Hospital in Vijayanagar Third Stage, which was disrupting smooth passage of waste water in the drain and also posing a health hazard for nearby residents.

Some residents complained about lack of city buses to several parts of Vijayanagar, lack of street lights on many roads and the incomplete asphalting works on Basavanahalli main road. A few others brought to the notice of the Minister about drainage water being let into an open field near BVB in Vijayanagar First Stage.

Chamundeshwari MLA G.T. Devegowda intervened to say that the main civic issues raised by the residents of Vijayanagar, parts of which comes under his Assembly Constituency, has been brought to the notice of Urban Development Minister Byrathi Basavaraj and several meetings too have been held in this regard.

Assuring that the problems highlighted by the residents will be addressed in the coming days, Devegowda said that the tender process for the ambitious Unduwadi drinking water project is underway. He asserted that the project, which is aimed at providing 24×7 drinking water to parts of Vijayanagar and a number of surrounding villages, will be completed in two years.

MUDA Chairman H.V. Rajeev apprised the Minister on the limitations and difficulties that MUDA has for spending on civic works in newly-formed localities and the matter has been brought to the notice of the Government.

Noting that the matter is like a one-time settlement, he asked the officials to ensure that no problems emerge after this settlement is done, for which officials must submit a comprehensive report as early as possible.

Referring to complaints on demolition of temples for development of roads, the Minister said that the existing temples must not be demolished. Citing the example of Bengaluru, where temples are spared from demolition, he said that he has received many complaints of temple demolition in Mysuru and this should not happen in future as we should respect the religious sentiments of the people.

Vijayanagar Residents Welfare Association submitted a memorandum to the Minister seeking a C.A. site for construction of a Yoga Centre and a temple in Fourth Stage.

‘Will build a house in Vijayanagar’

Impressed by the beautiful landscape of Vijayanagar, District Minister Somashekar said he has now serious thoughts on purchasing a 50’x80’ site in the locality and build a house.

Somashekar later left for R.T. Nagar. Interacting with local residents, Somashekar regretted that the apathetic attitude of officials had forced him to visit newly-formed layouts as there were many complaints of lack of civic amenities and other essential facilities.

He directed the officials to expedite all civic works so that there are no complaints in future.

Even as the residents started to complain MUDA Chairman Rajeev about improper power connections in the locality, the Minister telephoned the Department Secretary Tushar Girinath and asked him to address the issue. Rajeev lauded the instant response of the Minister saying that Somashekar will not let any work to remain pending.

R.T. Nagar Residents Welfare Association presented a copy of the letter written to Urban Development Minister Byrathi Basavaraj, highlighting lack of civic amenities and other facilities in the locality even after three years of formation of the layout.

From here, Somashekar went to Shanthaveri Gopalgowda Nagar, where he interacted with residents of the layout, Lalithadrinagar and Sardar Vallabhbhai Patel layout. After hearing the grievances on civic amenities, the Minister assured to address the grievances aired by them.He also directed the officials to be in constant touch with him for redressal of problems.