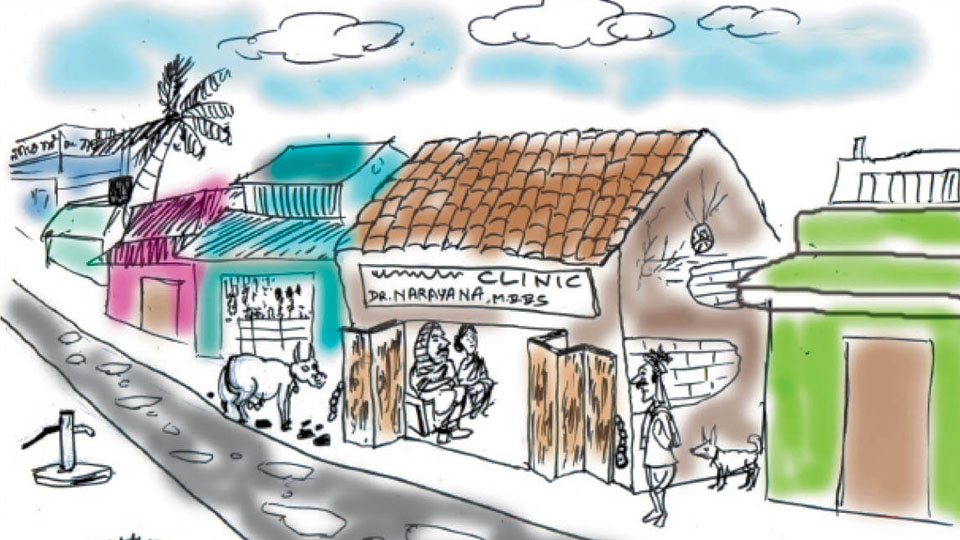 Koppa was a small village town in Kodagu. The only government departments there are the ubiquitous Police Outpost and the Post Office. The government hospital was 20 kms away in the Taluk Head Quarters at Virajpet.

The village town was in dire need of a doctor. When a young man Narayan from Kodagu completed his MBBS medical degree after 10 years of hard study, it was like crossing the Rubicon. And thereafter another two years of internship at the K.R. Hospital, Mysuru.

Realising that he would not get a government job, he decided to return to Kodagu and open a private clinic in his village town Koppa. By now he was past his youth. His old parents got him a bidara, a small shop-cum-residential accommodation in the town to set up the clinic. A chair, a small table and an old almirah were put in place. Of course, a wash basin was placed on a wooden tripod with a bucket for water and a dipper for the doctor to wash his hands.

The old parents and their only son Narayan began looking for an assistant for the clinic with some experience in a hospital or a private clinic or a druggist’s shop, generally called a “compounder.” Soon they found one Seenappa, as old as the doctor and a personality that made the patients difficult to distinguish the doctor from the compounder if it was not for the stethoscope that dangled from Narayan’s neck.

Dr. Narayan was now well-settled with a wife and child living with his parents. As there were no competitors, Dr. Narayan became famous and busy, so busy he got his lunch from home. At 3 O’ clock Seenappa would get him a cup of tea and continue attending the stream of patients.

One day Dr. Narayan had his tea as usual. But, surprisingly, he felt sleepy and soon went into a nap in his chair. When he woke up he saw patients waiting in the outer room with Seenappa engaged in conversation with them. After all, it was a small world with simple village folks.

Strangely, from then on, after tea he began to feel somnolent. To make himself comfortable, Dr. Narayan got a cot in the inner room to take a nap  in privacy. He thought it awkward and even indecent to take a nap sitting in the chair. So it was. And with the tea arriving at 3 O’ clock he would soon be out of his chair.

The patients would come but Seenappa, with his experience and familiarity with them, would ensure they would not wait for the doctor to come from his hibernation. For the period of Dr. Narayan ’s snooze that lasted for more than two hours, Seenappa would play the doctor, collect the fee and keep smiling till Dr. Narayan appeared with a facial wash, feeling guilty.

After sometime Dr. Narayan wondered why had he fallen to this bad habit of a long afternoon siesta. Could be age. Could be the obesity. He could not figure out but one doubt was nagging in his mind. The hot cup of tea instead of pepping him up should not make him drowsy.

By the time this doubt crept into his mind it was more than a year. Seenappa had purchased a new scooter while Dr. Narayan was still using his unreliable second-hand fiat car. Sleeping in the afternoon had by now become a habit for the doctor. He decided to break the habit but habits die hard. Again he reasoned, “Why do I feel sleepy after taking tea which should normally keep me awake?”

He decided to stop taking tea but habit would drive him to his bed where he remained half-awake. He was hearing subdued conversation between Seenappa and the patients and decided to see through the window the goings on. Seenappa was the “in-charge” doctor, giving medicines from the stock and pocketing the money. In small towns, there are no chemists and druggists. Hence, the doctor himself doubles for a chemist with a stock of medicines. The “compounder” assisted in dispensing medicines. Hence, patients, sometimes, think a “compounder” is equally knowledgeable like the doctor!

Seenappa was caught red-handed but what was he doing with the tea?

It did not take the doctor long to threaten Seenappa with a Police complaint and get his confession. He was lacing Dr. Narayan’s tea with sleeping pills!

ABRACADABRA Dr. Narayan K.B. Ganapathy Kodagu
Making the world a better place to live in for all
Art of Living to celebrate Intl. Yoga Day