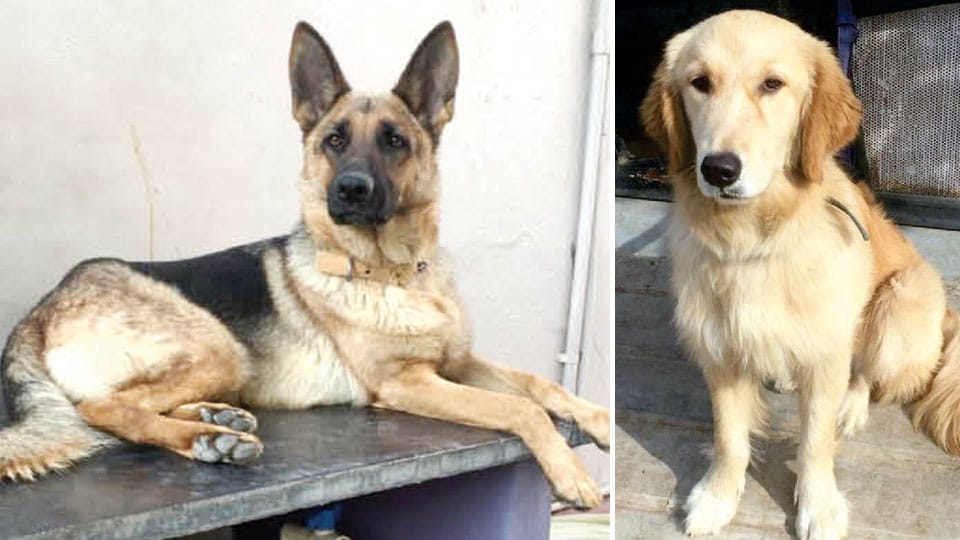 Dognapping ! :Illegal canine trading on the rise in Mysuru

Stolen dogs sold to kennels and estates in Kodagu, Ooty and Bengaluru

Mysuru: Where is my dog? This is one question an increasing number of dog owners in city are asking these days. And they are not getting any definitive answer. They fear their missing dogs may have been stolen for illegal breeding in what animal activists are calling the growing number of ‘puppy mills’ in many parts of the city, Kodagu, Bengaluru and even Ooty.

Spurring the illegal breeding is the great demand for pedigree dogs. Most of the dogs that are Dognapped (stealing a dog, especially in order to sell it) are Golden Retrievers, Labradors and German Shepherds. With pedigree dogs costing thousands (sometimes lakhs) of rupees, it’s no surprise that some dogs are stolen and sold.

A rare canine, Alaskan Malamute lovingly called ‘Samsung’, worth Rs.8 crore was stolen from Cadaboms Kennels in Bengaluru owned by Satish who is also the President of the Indian Dog Breeders’ Association. Satish had imported Samsung from China two years ago when she was a one-year-old pup. Samsung’s leash has been cut and the dog was taken from the house in Hanumanthanagar in Bengaluru. The news of Rs. 8-crore-worth dog was published in newspapers today.

Many theft cases in Mysuru

Following up on the news, Star of Mysore found that there are many such dog missing cases in Mysuru too where mainly, the canines are stolen. While some owners have got back their dogs, some are still searching them and they have advertised in newspapers, posted the pet photos on social media platforms and are also doing the rounds of Kennel Clubs to find their dogs.

While many online pages feature heart-melting images of missing or stolen pets alongside appeals from their owners begging for their return, some owners have lost hopes of getting their pets back.

Theft of a dog is a criminal offence. But the rule is rarely enforced as the Police even refuse to lodge complaints. Many dog owners told SOM that their complaints were not received at Police Stations.

Hidden and kept for breeding

“I have seen many expensive pedigree dogs in some of the estates in Ooty and Kodagu. These are stolen dogs hidden and kept for breeding. Some breeders use pedigree dogs and abandon them once they are past their breeding life span,” says Vinod and adds that dogs are stolen from Mysuru and transported to Kodagu, Bengaluru or Ooty where they are used for breeding. “This is a big racket and sadly, no action is being taken by the Police,” Vinod regrets.

Animal activists and pet lovers who have lost their loved ones believe that organised gangs are behind the theft and kidnapping of dogs. Some of these unscrupulous elements are known for cruel breeding practices. The dogs are kept in cramped cages in dirty and deplorable conditions. “Many a times there is poor hygiene, no veterinary care and rough handling of pets by untrained workers,” says Raghav whose German Shepherd was stolen and abandoned near his house. Increasing demand for exotic breeds has made this an active industry where pets are stolen from families and treated as commodities. This leads to a cycle of exploitation of the females, in which the breeders keep getting them pregnant to produce as many pups as possible.

On Dec. 19 this year, Areyada Mandanna’s three-year-old White/brown Scoobee was stolen from his house at Mandi Mohalla-Kesare Border at 6.30 pm. After he advertised in newspapers and posted the photos on social media, he got a call from a person from Bengaluru who had come to Mysuru that my pet was standing on the Rajendranagar main road,” he says.

“The thieves had taken my dog and after it created ruckus at their place by continuously barking and howling, the thieves abandoned the dog in Rajendranagar. My Scoobee is very gentle but obedient and the thieves could not pacify him. When I found the dog, its throat was infected and swollen due to continuous barking,” Mandanna reveals. He then approached the N.R. Mohalla Police Station to file an FIR. “Though the Police came to Rajendranagar and my house, the FIR was not booked. They promised me that they will scan the CCTV footages in the area and nail the thieves but nothing has happened. I did not follow-up as I got back my dog,” he says.

Ruby the cat with a bell goes missing

Uthappa’a pet cat Ruby went missing from Racoon Rooms, Contour Road, Gokulam Third Stage from Dec.10 this year. She was one year old with black and grey stripes and had a red collar with a bell around its neck. The feline has not returned home since then.  “After we placed advertisements in newspapers, we got a couple of calls from people about a wandering cat. But it was not our Ruby and we are missing it a lot. The cat was vary playful and was part of our family,” Uthappa says.

Reacting to the theft of dogs, Canine Club of Mysore President B.P. Manjunath clarified that kennel clubs have no role in the theft. “Kennel Clubs are not breeders and clubs only organise dog shows. Owners must be careful and ensure that microchips are embedded on dogs so that it becomes easy for them to trace the pets,” he said.

Mentioning about the incident where Rs. 8 crore worth Alaskan Malamute was stolen in Bengaluru, Manjunath said that the owner should have provided security to the dog as it is worth crores. “In Mysuru too I am seeing that many dogs are being stolen and sod to kennels. I will discuss in a meeting of Kennel Clubs scheduled tomorrow and urge the Police to book cases and take action,” he said.

“Luckily I got my Bubbly back”

B.V. Raghav’s German Shepherd Bubbly was stolen from his house in Krishnamurthypuram on April 12 this year. But he was lucky as he got back his pet. “My dog was taken to a place during night using force and they kept it for five days. Realising that the dog is not willing to listen to any of their commands, they left the dog near my house,” says Raghav.  Dogs are hardcore loyalists and it takes time for it to adjust to a new owner. “Unfortunately, while leaving back my dog, thieves had tied the neck-belt tight. I found it and immediately released the belt,” he explains.

Siddharth’s White Labrador, Gohan, wearing a purple collar, was stolen from his house on Ashoka Road on Dec. 3 this year. He had to pay Rs. 5,000 to a kennel owner to get his pet back. “My dog was stolen and desperate to find him I posted newspaper advertisements and posted the pet photos on social media. Through contacts, I discovered that the pet was sold to a kennel in Siddhartha Layout for Rs. 4,500. I had to pay Rs. 5,000 to get my dog back,” he says.

“Fortunately, the kennel owner had video-recorded the moment when my pet was sold to him. The footage clearly shows the image of the pet thief. I later approached the Lashkar Police Station and handed over the footage and image and asked them to file a complaint,” he reveals.

Siddharth alleged that the Police refused to accept his complaint as the person in the photograph was a “habitual offender” and it would be improper for him to “mess with him”. “I repeatedly called the Police Station to follow-up on the complaint and the reply I got is that they are yet to arrest him and he is a habitual offender,” he says.

“As the Police do not take action against such persons, the thieves are fearless and continue their criminal activities,” he reasons.

“Golden Retriever Tiara was the apple of my eye”

Mohammad Nayeem’s female Golden Retriever Tiara was stolen from Bannimantap on Feb. 18 this year and he still longs for his pet and has no idea where it has been taken. “My house is near the Columbia Asia Hospital junction and I suspect that the thieves hit the highway after lifting my pet. We searched for it for days and printed pamphlets, posters and distributed in the neighbourhood. We also placed newspaper ads and visited almost all kennels in Mysuru searching for Tiara,” he says.

Tiara had golden hair and was very friendly. “There is a big racket of pet breeding and the thieves sell the dogs to breeders in Kodagu, Ooty and Bengaluru and many friends of mine say that pet breeding is a big industry where the dogs are forced to breed. A puppy costs anywhere between Rs. 15,000 to Rs. 20,000 and if a breeder manages to cross one golden retriever with another and obtain 6 puppies per year, he can earn in lakhs,” he says.

Tiara was stolen using biscuits as bait and the incident occurred when Nayeem’s watchman was inside the house and not near the gate. “The thieves managed to enter my house compound and coax Tiara despite the presence of a Doberman (considered ferocious) in the compound. They are professional thieves and a nearby bar’s CCTV footage shows my dog following a person wearing a hooded jacket,” he says.

Nayeem approached the N.R. Police Station but the Police refused to file an FIR against “unknown persons”. Now even if they find Tiara, she will be loyal to the new owner and will not recognise me,” he says with a sad smile.

“Two bike-borne men stole Tipsy and sold him off”

Sumanth’s Labrador Tipsy was stolen on September 15 this year near Infosys campus at Hebbal. “I and my wife were walking and Tipsy was following us. Two men came on a bike and fed biscuits to him and bundled him on the bike and fled. We did not realise this until we saw the bike from far. Fortunately, this incident was recorded in CCTV camera placed on a house. We managed to secure the footage,” Sumanth explained.

The dog was sold to a kennel in Hebbal. “We came to know about this and showed the CCTV footage to the kennel owner and asked him to return the dog. He obliged as it is illegal to keep stolen dogs. We got Tipsy back after 6 days,” he reveals.