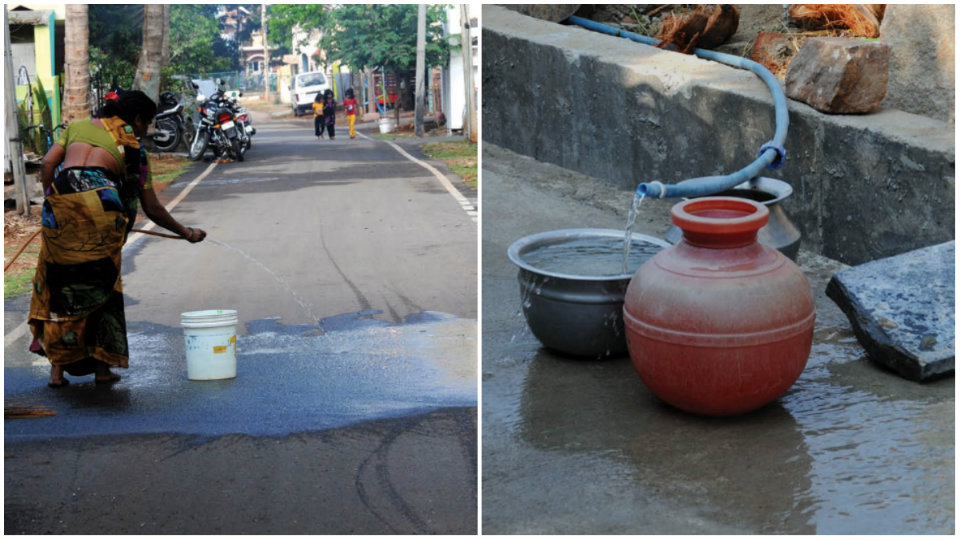 Mysuru:  “Do not waste drinking water otherwise your  water connection will be cut.” This is the advisory (or call it a warning) issued by the Mysuru City Corporation (MCC), ahead of dry and hot days.

The Corporation is already chalking out plans to battle water crisis during summer at a time when there is no clarity over the Cauvery water sharing between Karnataka and Tamil Nadu during crisis situations. One strategy to save water is to inform residents not to waste drinking water.

MCC Commissioner G. Jagadeesha said that action will be taken on people who waste drinking water. “Generally, people wash their vehicles and their courtyards, water their lawns and also bathe their pets. We have asked them to use water judiciously as we have to tide over at least three months of summer,” he said.

“The only way out is for us to initiate systems to drastically reduce usage and learn to re-use waste water. Water is irreplaceable and has no substitutes. By practising simple steps we can conserve water and ensure its availability,” he added.

Residents have to regularly check their overhead and underground tanks for leakage as gallons of water will be wasted due to leaks. “We will also levy fines on both domestic and commercial consumers for water wastage. For domestic users, the penalty would be lesser compared to commercial consumers,” he said and added, “We have asked residents to install ball valves to their sumps and overhead tanks.”

Jagadeesha said he had written to the Irrigation Department to reserve certain quantity of water in reservoirs for drinking purposes of Mysuru during summer. “Mysuru requires 0.4 Thousand Million Cubic Feet (tmcft) per month. We have asked the department to reserve minimum of 1.2 tmcft for three months to ensure potable water could be supplied to the city till the arrival of monsoon,” he added. Everyday 250 MLD (million litres per day) water is being supplied to the city from rivers which are being pumped from Belagola, Hongalli, and Melapura pumping stations.

“The Centre and State Governments and the MCC have come together to build two giant ground-level water storage tanks. These tanks will boost the storage capacity and both tanks can store of 13 million litres of water. Over 40 percent of the works have been completed,” MCC officials said.  While one tank is being built near the existing tank at Vijayanagar Second Stage, another tank is coming up at Yadavagiri, opposite Vikram Hospital inside the premises of the office of Executive Engineer, Karnataka Urban Water Supply and Drainage Board (KUWS&DB), they added. The two new water tanks, in addition to the bigger and smaller tanks in city, will increase the storage capacity for the city to tide over crisis situations, officials said.

According to officials of Irrigation Department, there is just 11.6 tmcft in Krishna Raja Sagar reservoir and 6.62 tmcft water stored in Kabini reservoir. Water level in the reservoirs may go down further in the coming days, officials said, adding that they have reserved a certain quantity for drinking purpose.

Water Inspectors to identify water wastage in their jurisdiction

READ ALSO  JD(S) may part ways with Congress in MCC

He said that the Water Inspectors, who will be on rounds in their jurisdiction, will identify water wastage in houses such as water overflowing from sumps sans ball valve to control water; water overflowing from overhead tanks; owners washing vehicles in front of their houses using drinking water; washing front portion of houses etc. and will click photographs and take down the   address of such houses.

He said that the Water Inspectors will also look into CCTV footages of cameras installed on roads and houses and then give their report to the Executive Engineer of VVWW who will take further action.

A separate cell has been constituted to hear the grievances of rural residents from Mysuru district regarding drinking water. The cell will accept complaints and forward the same to the departments concerned.