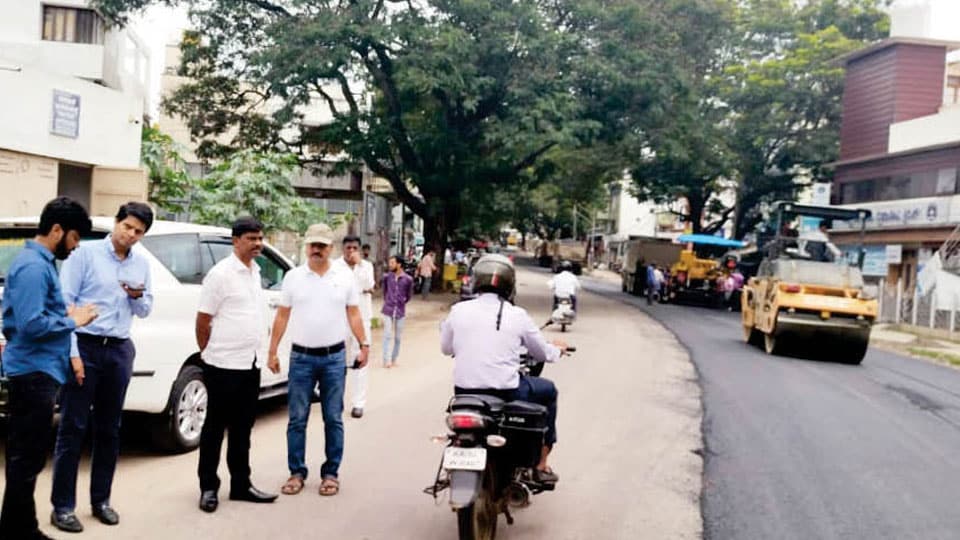 Mysore/Mysuru: With the Meteorological Department predicting no rains for four days from today, Mysuru City Corporation (MCC), Mysuru Urban Development Authority (MUDA) and the Public Works Department (PWD) have taken up asphalting of various main roads across the city from today.

Asphalting works are taken up on Vishwamanava Double Road, near Agrahara Circle, K.G. Koppal Road and other main roads. The steps on Bamboo Bazar Road (Jumboo Savari route) on which grass and weeds had grown is being removed and the steps would be painted. Many people come and occupy these steps since early morning to watch the  Dasara procession.

MCC Commissioner G. Lakshmikantha Reddy, along with Mayor Shivakumar, who inspected the asphalting, said that work orders were issued earlier but they could not be taken up due to continuous rains.

Mayor said that Krishnaraja MLA has given Rs. 150 crore and Chamaraja MLA has provided  Rs. 250 crore for the works and work order for Rs. 100 crore for each Constituency has been given.

Pointing out that road asphalting works have been taken up from today, the Mayor said that if it rains, only potholes will be filled using the latest technology besides stating that the works would be completed before the commencement of Dasara.

Meanwhile, public were heard saying that the road asphalting works are being taken up in a hurried manner as President of India Droupadi Murmu will be arriving in city to inaugurate Dasara on Sept. 26.

2 COMMENTS ON THIS POST To “No rains predicted for four days: MCC, MUDA and PWD take up road asphalting works across city”