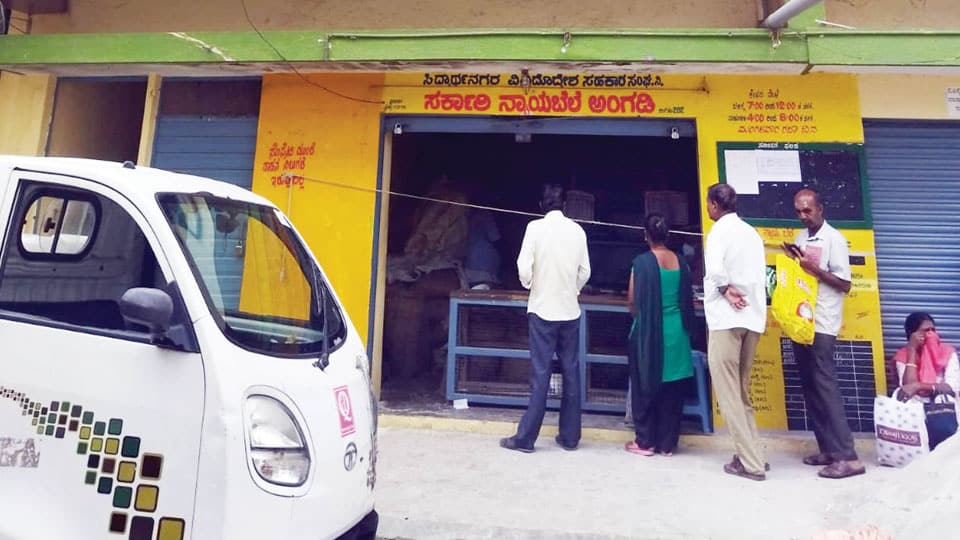 Mysore/Mysuru: The distribution of grains through Public Distribution System (PDS) has been affected at some fair price shops in city due to server issues that led to failed transactions via an electronic point of sale (e-POS) machines. Several beneficiaries are returning empty-handed after waiting outside ration shops for long hours.

It is Dasara season and everyone wants to prepare good food and sweets at home. But many of the beneficiaries are unable to get their quota of grains due to server issues. The fair price shop owners cannot complete any transaction without their biometric signature.

For instance, people are denied their regular ration supply at the fair price shop run by Siddarthanagar Vividdodesha Sahakara Sangha at Siddarthanagar in Nazarbad limits.

The server is down often here and whoever goes there for their ration quota gets a standard reply of “server down, come later.”

“This is not a one-time problem but whenever we go there, the problem persists. Mostly poor and aged people come to this shop for their quota of ration and all of them are asked to come either in the afternoon or the next day,” 60-year-old Sharadamma told Star of Mysore. The ration shop is open from 7 am to 12 noon and from 4 pm to 8 pm.

The problem with the server is frequent and it has not been rectified yet. This means that the beneficiaries will have to return to the fair price shops  only when the server issue is rectified. There are no alternative verification arrangements as the entire PDS has been made online,” Rajanna, another beneficiary said.

Machines at the fair price shops are linked to State-level software and Aadhaar cards. When a beneficiary takes his/her quota of ration, thumb impressions and data feed should match. Because of the server problems, thumb impressions of family members do not match with the data feed in the machines.

In some places, the e-PoS machines record the biometric data of beneficiaries but go offline before the receipts could be printed. Under the circumstances, it has become difficult to run the ration outlets as a permanent solution has not been found to the problem.