Home » Columns » Abracadabra By K. B. Ganapathy » Dr. S.L. Bhyrappa: A legend in his own lifetime among novelists —1 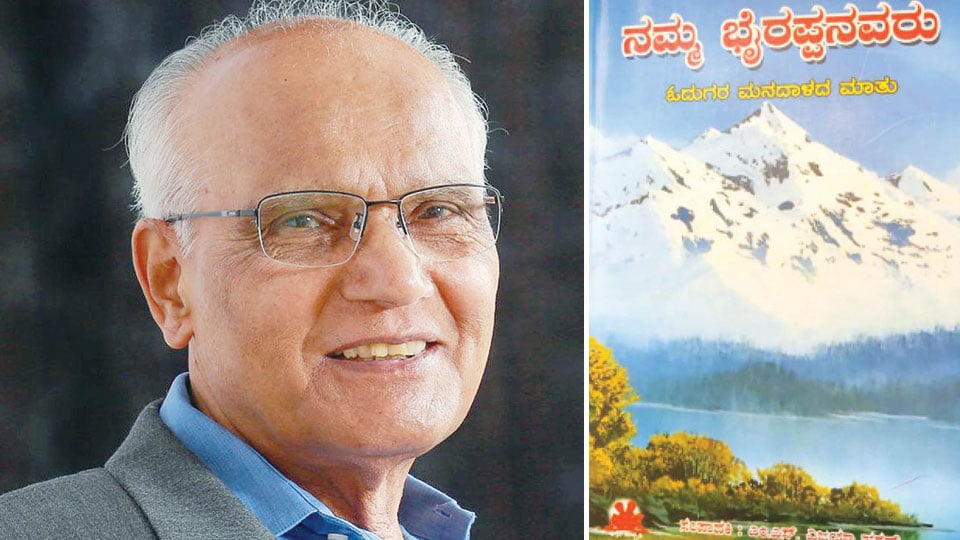 Dr. S.L. Bhyrappa: A legend in his own lifetime among novelists —1

Dr. M. S. Vijaya Haran. Who is that? I was rather surprised to receive a phone call from her about a month ago. Honestly, I had only heard of her name.

Instantly she identified herself as the former Director of Akashvani, Mysore and one who recently published a book titled ‘Namma Bhyrappanavaru’ (Our Bhyrappa). She said she had sent a copy of the book to me and would like me to write about it in my column in Star of Mysore. I readily agreed —  after all,  the request was from a  scholar and the subject was a giant among the Kannada novelists.

It is a collection of 109 opinions expressed by a cross-section of readers of Dr. Bhyrappa’s novels and writings in Kannada and other languages to which his original writings were translated. A book of 434 pages, appropriately titled ‘Namma Bhyrappanavaru’. Very well edited by Dr. Vijaya Haran.

While a list of all the 109 writers with their names, title of the article and the page numbers are provided in the “contents”, each article too must have carried  the number chronologically for the readers’ convenience. Another deficiency I found was not providing a list of all the books written by Bhyrappa. Since different writers referred to different books they have read, the reader of this book would look for opinions about other books of Bhyrappa. I am told Bhyrappa has written over 30 books. No mean achievement for any writer producing each book as a masterpiece and best-seller.

Best-seller, yes. I have not checked with Kannada Book Publishers but one publisher told me that he did not think there was any other Kannada writer whose books were best-sellers except that of Bhyrappa. He recalled that ‘Avarana’ became a best-seller even before its first edition came out! No wonder many of his books have seen many editions both in Kannada and in translation, specially Marathi.

I have read this book ‘Namma Bhyrappanavaru’  from cover to cover — leaving out a few in between — because it is highly readable. Well sir, after all, every person is, in some way, a voyeur!! It means being curious to know what others are doing. Readers of Bhyrappa’s books have given their opinions about the benefits and joy they derived in reading them. It is very thoughtful of Dr. Vijaya Haran to have asked these respondents, to her request for the article, NOT to review the book but to write about the influence the book they read had on them. But some have written about their inter-personal contact with Bhyrappa, apparently feeling proud about it. A kind of curiosity is created in the readers of this book as they turn pages till the end. And if you know the contributors, I know some of them, your curiosity will be more as it happened with me.

For example, I was reading the article by Dr. V. Laxmi Narayan, Diabetic Specialist. He goes overboard in joy about being a family doctor for Bhyrappa. He does not forget to mention he was also the family doctor for Kuvempu. Dr. Laxmi Narayan also speaks of Bhyrappa’s Pace Maker to regulate the heart rate and I was reminded about my own Pace Maker. Wonder if time has come for replacing mine with a new one, what with COVID-19 pandemic and the restrictions!

Another interesting contraption, he calls in the article as ‘bullet train’, which is provided in Bhyrappa’s house to take him to his work place upstairs which is 20 steps climb, also reminded me of my visit to former Justice C. Shivappa’s house in Pattasomanahalli in Pandavapura taluk where I found his single-seater ‘bullet train’ to take Justice Shivappa upstairs without having to climb the flight of steps. It was attached to the staircase.

Likewise another article by well-known Sanskrit and Research Scholar Dr. H.V. Nagaraja Rao (who also writes a weekly column for our sister publication Mysooru Mithra) made good reading for me. It mentions of the writing of the book ‘Saartha’, also considered a masterpiece. The subject relates to events that happened during 8th century India, India of the days of Shankaracharya, the legendary Hindu Monk who, it is said, was responsible for arresting the spread of Buddhism in India. The book ‘Saartha’ also deals with the famous debate on religion, God and ethics between Shankara and another well-known Hindu Scholar Mandana Misra, propounding Karma theory about which our Prime Minister Narendra Modi recently mentioned in his speech at a function.

Be that as it may, Dr. Nagaraja Rao writes that during the period Dr. Bhyrappa was writing the book ‘Saartha’, an 8th century period story when Sanskrit was the sacerdotal language of the Saints and the religious scholars, Dr. Bhyrappa felt he must get a flavour of Sanskrit language to have an aura of that period in the narration. So it was arranged between them that Dr. Nagaraja Rao should join Dr. Bhyrappa during his evening walk and talk only in Sanskrit of which Dr. Bhyrappa had a smattering knowledge. That was in 1990. When the book was published, naturally, it made news and became a best-seller. Later its Sanskrit translation was proposed and Bhyrappa’s natural choice for the translator was Dr. Nagaraja Rao! It also won the National Sahitya Academy Award for Dr. Nagaraja Rao for best translation.

Now let me revert to the book  ‘Namma Bhyrappanavaru’.

Indeed Dr. Bhyrappa is an extraordinary wordsmith in Kannada. Like a potter, who uses the clay to mould his products, in the novel Bhyrappa uses the words the way he wants to create a masterpiece. What marble was to Michelangelo, Kannada language is to Bhyrappa. That, perhaps, is the reason for his wide readership. There is minimum of rhetorics unlike some of the other well-known writers in Kannada. He is not exhibiting scholarship or mastery over the language. He is writing simply to tell a story that will create magic in the minds of his readers! Which is why his books become unputdownable once you begin to read. Take his ‘Bitthi’, ‘Parva’ or ‘Avarana.’ I vouch for it.

‘Namma Bhyrappanavaru,’  in a sense, is an experiment in recognising a literary person and also evaluating his mass of works. Here the editor of this book Dr. M.S. Vijaya Haran is like a researcher-scientist. Looking at the book I guess she has succeeded to a great measure in her efforts.

4 COMMENTS ON THIS POST To “Dr. S.L. Bhyrappa: A legend in his own lifetime among novelists —1”