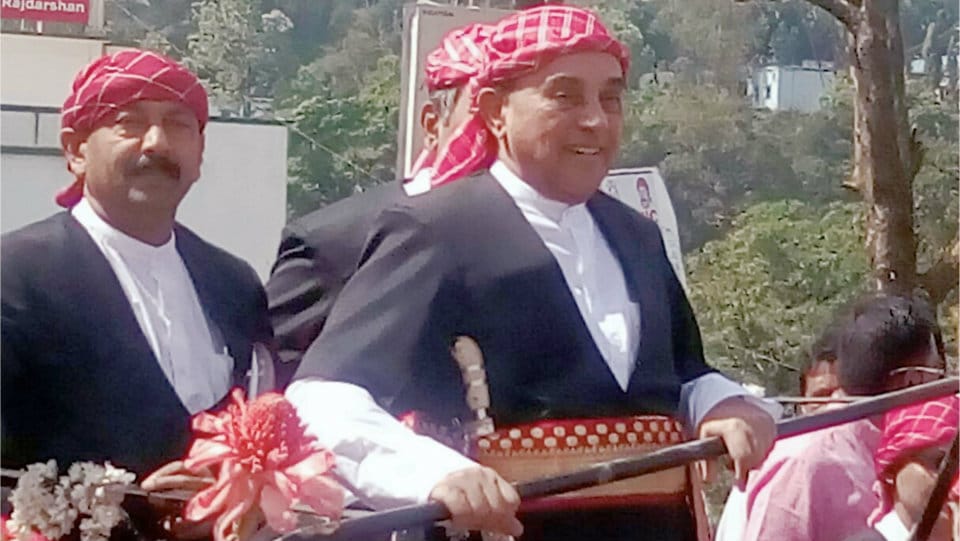 Dressed in traditional Kodava attire, complete with Kupya, Chele and Peechekathi and Mandethuni, Dr. Swamy was taken in an open jeep procession via the main thoroughfares to Gandhi Maidan, the main venue of the event while people cheered and showered flower petals on him. Dr. Swamy was accompanied by CNC President N.U. Nachappa and Virat Hindustan Sangam National General Secretary Jagdish Shetty.

Addressing a massive gathering where thousands of people had assembled, Dr. Subramanian Swamy spoke on ‘Kodava Quest for Autonomy, Kodava Tribalism and Global Politics’. Amidst loud cheers from the audience, the Harvard Scholar said that the demand of Kodavas for autonomy was perfectly justified and he would help them get the autonomous status.

Citing the example of Telangana, Uttarakhand and Chhattisgarh, he said that autonomy for Kodagu was just a matter of time. 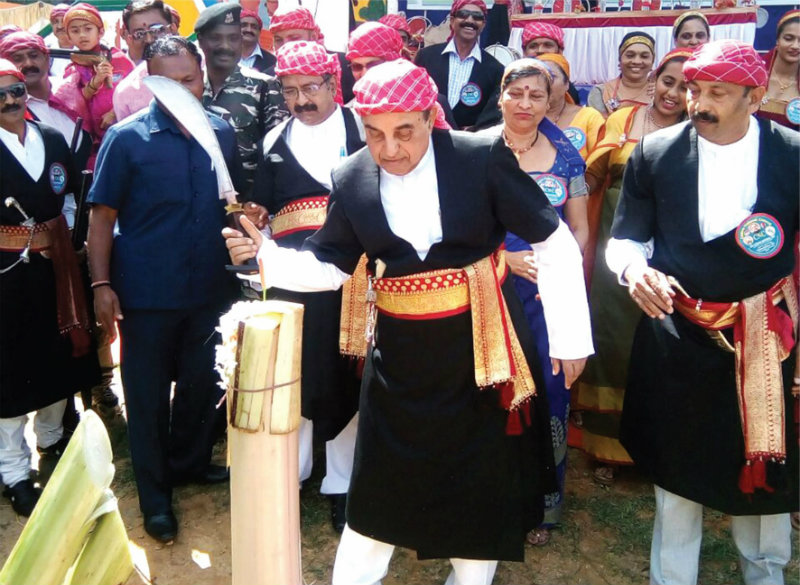 “Kodavas have made significant contributions and have given its sons to the Defence forces who rose to become exemplary officers. Kodavas have participated in freedom struggle and have opposed Emergency. I see no reason why Kodavas should not get autonomy,” Dr. Swamy said.

Mentioning Gorkha struggle for autonomy, he said that once Kodagu is declared autonomous, Kodavas will have the rights to govern themselves and safeguard their race, community, traditions and customs. “Now I see black money flowing into Kodagu as it is a wonderful place. People like former Finance Minister P. Chidambaram own properties here. If you get autonomy, your land will be saved from outsiders and black money hoarders and you will have every right on your property,” he said.

Continuing, the Rajya Sabha MP said that an Autonomous Council was an immediate priority for Kodagu. “Smaller states are better governed and we have seen many examples. I don’t mean that you should separate from Karnataka. Remain in Karnataka and get the autonomous status. You, as a special race, have to maintain a distinct identity so that you can determine your own future. ,” he said. Important resolutions on Codava Land Autonomy and allied subjects were passed on the occasion.

Arriving at Madikeri this morning after an overnight stay at Hotel President in Mysuru after addressing a public meeting on “Ram Mandir – Way Forward” at Rajendra Kalamandira on Ramanuja Road, Dr. Subramanian Swamy headed to a hotel where CNC members assisted him to wear the Kodava traditional dress. He was brought to the Gandhi Maidan in the open jeep and while he cut banana stems as part of Kodava tradition, Jagdish Shetty fired in the air, signalling the beginning of the Codava National Day.

After participating at the CNC event, Dr. Subramanian Swamy was scheduled to arrive in Mysuru by road and take a flight to Chennai from Mysore Airport this evening.

4 COMMENTS ON THIS POST To “Dr. Subramanian Swamy assures Autonomy Status for Kodagu”