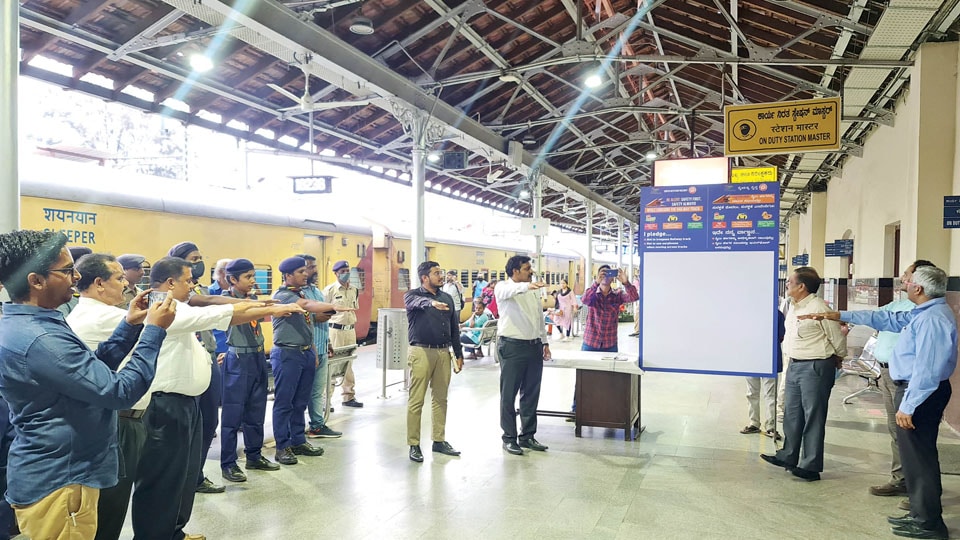 Creates awareness among people against trespassing on Railway tracks

On the occasion, the DRM administered pledge to passengers and other Railway staff not to trespass across the track, as well as not use earphone near the Railway tracks.

He appealed the passengers and public to be careful and cautious while passing through Railway tracks and Level Crossing Gates as any negligence can cause fatal incident on tracks involving hundreds of passengers in the train.

The DRM also urged passengers to use foot over-bridges (FOBs) and to avoid crossing of Railway tracks in Stations and said any unauthorised trespassing on Railway premises including the Railway track is a punishable offence under Section 147 of the Railways Act, 1989 and can be prosecuted.

He further informed that SWR Mysuru Division has taken various steps in safeguarding the tracks and has constructed  fencing at vulnerable locations and approaches of major Railway Stations to guard tracks from cattle crossing and to prevent unauthorised trespassing.

As part of the fortnight campaign, the Railway Protection Force (RPF), Railway safety officers and staff, Bharat Scouts and Guides will be involved in educating the passengers and locals residing nearby tracks to ensure safe train operations as well as their personal safety at Level Crossing Gates, Railway track passing through the habitation, stations premises, etc.

Large banners and posters are displayed at prominent locations in various Stations across the Division and regular announcement will be made to educate the public against trespassing and consequences of using earphones and cellphones in the vicinity, according to a press release.