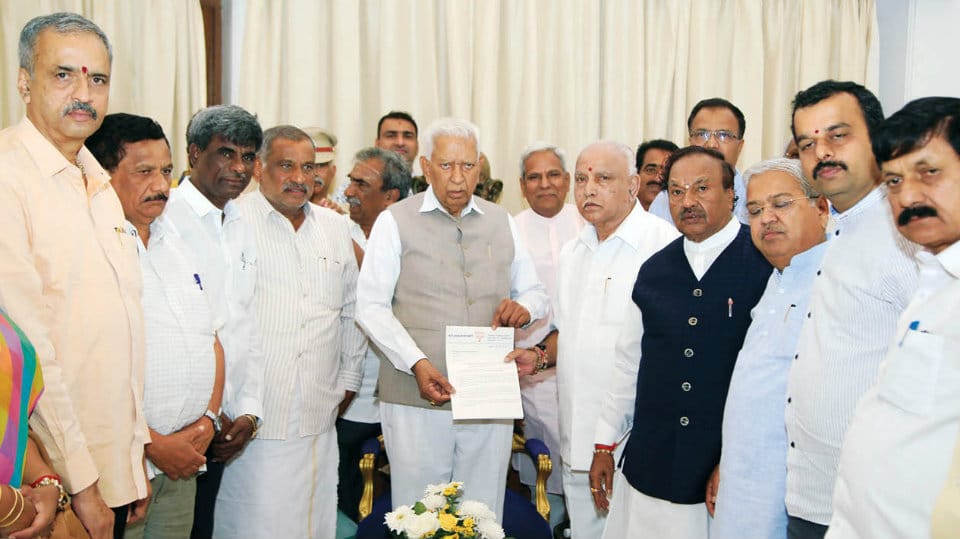 Bengaluru / Mysuru:  Protesting against the attack on Hassan BJP MLA’s residence, the BJP staged State-wide protests this morning. In Bengaluru, BJP leaders marched into Raj Bhavan and submitted a memorandum to the Governor.

The release of an 80-minute audio recording yesterday morning had repercussions on the streets of Hassan with JD(S) workers protesting outside BJP MLA Preetham Gowda’s residence at Vidya Nagar. The situation soon turned violent in which one man was injured.

In the audio clip, a man, purportedly Preetham Gowda, is heard commenting on the health of JD(S) Supremo H.D. Deve Gowda and Chief Minister H.D. Kumaraswamy, and doubting survival of the party. Preetham Gowda has claimed that the voice is not his.

Soon after the audio recording was released, angry JD(S) cadre gathered outside Preetham Gowda’s house and a BJP worker suffered injury when an alleged JD(S) worker flung a stone at the house, sparking counter protests by the BJP even in the Legislative Assembly.

This morning, the BJP staged protests across the State and in Bengaluru, a BJP delegation led by Opposition Leader B.S. Yeddyurappa, accompanied by top party leaders, submitted a memorandum to Governor Vajubhai R. Vala at Raj Bhavan.

Yeddyurappa, accompanied by top BJP leaders, marched in a procession from Vidhana Soudha to Raj Bhavan and submitted the memorandum, seeking action against the State Government for yesterday’s attack on Preetham Gowda’s residence.

After submitting the memorandum, Yeddyurappa said that he would bring the matter to the notice of the Union Home Minister Rajnath Singh as well.

“JD(S) leaders are not ready to tolerate someone coming up in politics against them. We strongly condemn the incident. We have met the Governor and brought to his notice that our MLAs have no safety under the JD(S)–Congress rule in the State,” he said.

Strongly condemning the attack on Preetham Gowda’s residence, BJP members staged a demonstration in front of the Deputy Commissioner’s office in Mysuru this morning.

Addressing the protesting party workers, City BJP President Dr. B.H. Manjunath claimed that the audio clip on the purported attempts of the BJP to poach Congress-JD(S) MLAs released by CM H.D. Kumaraswamy was fake and was solely aimed at maligning the BJP.

Manjunath claimed that the JD(S) was out to politically and physically finish off Preetham Gowda, who was well organising the BJP in Hassan district, which is a JD(S) stronghold. Terming the attackers as JD(S) goons, Manjunath demanded the arrest of all the culprits. MP Pratap Simha said that yesterday’s attack on the MLA’s residence was a shameless and cowardly act of JD(S) workers.

Maintaining that the JD(S) is scared of Preetham Gowda’s organisational skills, Simha lashed out at the JD(S)-Congress coalition government, accusing it of harbouring goonda elements. Simha said that such cowardly acts of the JD(S) would only help the BJP in the forthcoming Lok Sabha Polls.