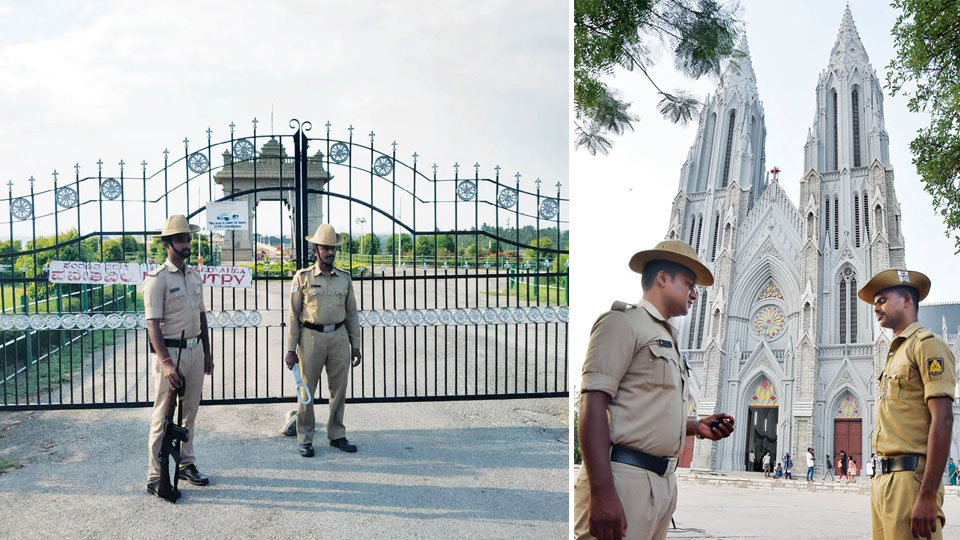 Mysuru/Mandya:  A red alert has been sounded across Mysuru and Mandya districts, frequented by thousands of tourists including foreigners, after the serial bomb blasts in Colombo, Sri Lanka, snuffed out the lives of over 360 people last Sunday.

Security has been beefed up at St. Philomena’s Church where thousands of tourists visit daily, Bishop’s Residence, Central and State Government’s premier Research Institutions and Department Offices, tourist spots like the iconic Mysore Palace in city among other spots. Police have intensified frisking and checking of visitors and their baggage at all these places.

Speaking to Star of Mysore this morning, IGP Southern Range, Umesh Kumar said that high alert has already been sounded across the State including tourist hubs like Mysuru, Mandya, Kodagu and adjoining districts by the State Director General and Inspector General of Police (DG&IGP) Neelamani Raju as a precautionary measure.

As many as 83 Karnataka State Industrial Security Force (KSISF) personnel have been deployed to provide security to KRS Dam site along with the regular Police personnel. A team of KSISF personnel headed by Pramod is overseeing all security arrangements round-the-clock. The personnel are also frisking the visitors at entry points of KRS Dam and the visitors have to strictly undergo the metal detector screening.

Directions have also been given to hoteliers in these districts including the Brindavan Hotel in KRS to be more strict and vigilant with regard to the identity verification of their guests and to share the information with Police on a regular basis.

KRS Police have been asked to monitor the CCTV footages on the movement of tourists to the Dam Site and also keep a close vigil on the movement of suspicious people at all transit, exit points including Railway Station, Bus Stand and major religious places. All Superintendents of Police (SPs) in Southern Range, Anti-Terrorist Squad, Dog Squad and Anti-Sabotage Squad have been asked to be on red alert.

City Special Branch have been authorised to keep an eye on the movement of foreigners in Southern Range limits while Garuda Police patrolling and Police Control Room vans to step up vigil on Churches round-the-clock. Respective Police Station Sub-Inspectors have been directed to supervise security arrangements in their limits.

The toll in a series of suicide bomb blasts on Easter Sunday targeting hotels and churches in Sri Lanka has risen to 359, Colombo Police said today. The additional deaths were the result of the wounded dying of their injuries. At least 500 people were injured in the attacks.

The blasts have been claimed by the Islamic State (IS) group, with Sri Lanka’s Government pointing the finger at the little-known local Islamist group National Thowheeth Jama’ath (NTJ) and also claiming that the group likely had “international” support.

“Certainly the security apparatus is of the view that there are foreign links and some of the evidence points to that,” Prime Minister Ranil Wickremesinghe told media last night.