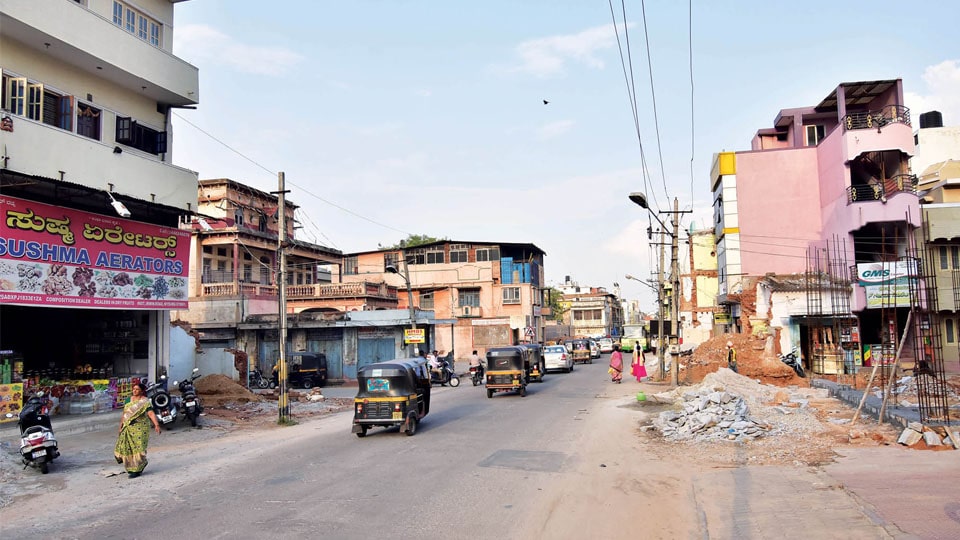 With all focus on LS polls, Irwin Road widening put on back-burner

Mysuru: The widening works of Irwin Road in the heart of the city, which was launched with much fanfare late last year, has now taken a back-seat, thanks to the LS polls!

Due to high density of vehicles, especially during peak hours, the road used to witness frequent traffic jams and snarls, thus causing a lot of inconvenience to motorists and the pedestrians alike.

As the road was witnessing huge traffic jams almost every day, the MCC decided to widen this rather narrow road from 12 mts to 18 mts.

In the second phase, the MCC widened and developed the 500 mts long stretch from City Railway Station Circle to Government Ayurveda College Circle at a cost of Rs. 3 crore.

The MCC, which had planned to take up the widening on the stretch from the Head Post Office to Government Ayurveda College Circle, which is the busiest part of the road in the third phase, purchased buildings on either side of the Road. There were 84 private properties in this 750 mts stretch and the MCC after announcing compensation at the rate of Rs. 13,072 per sq.ft, allotted Rs. 16 crore for payment of compensation to 56 property owners. Thereafter, the MCC initiated the registration process for taking possession of the properties. But the MCC needs Rs. 21 crore more for compensating the Mosque, Prasad Nursing Home, District Industries Centre, City Central Library and other buildings that are existent along the Irwin Road.

Even as the MCC was making efforts to get the required Rs. 21 crore from the Government, the Lok Sabha polls were announced, following which the MCC’s initiatives went into the back-burner, with the Government yet to release the funds. The registration of properties too has been stopped.

The widening of Irwin Road involves converting the road into a 18 mts wide 4-lane Road with a 2 ft. wide median, concrete box drains on either side of the road, footpaths on either side and installation of ornamental lamps, which is estimated to cost Rs. 10 crore.

The road expansion works can be expedited if the buildings on either side of the road are demolished. But a few litigations have come in the way of demolition, which has posed a hurdle for expedition of works.

Although the LS polls in the State is over, the MCC has to wait for at least a month for the poll code to end for getting the allotted funds from the Government.

The MCC authorities (Zone-6) hope that the project will be completed in 2 months and thus bring relief to thousands of motorists and commuters who travel on Irwin Road, which is one of the most important link road in the heart of the city.