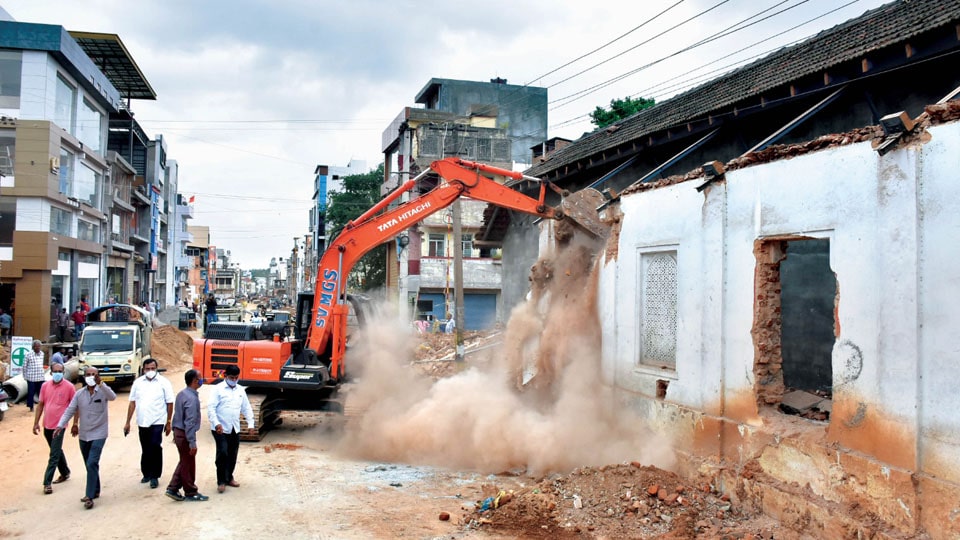 Mysore/Mysuru: Works on demolition of properties for the widening of Irwin Road picked up pace with the demolition of a portion of the District Industries Centre (DIC) building near Government Ayurveda College Circle on Thursday.

A portion of the DIC building measuring 10ft. wide and 300 ft. in length was demolished using an earth excavation machine under the supervision of Mysuru City Corporation (MCC) Zone-6 Assistant Commissioner (AC) Nagaraj and other officials.

The construction of concrete box drains, median, footpath, installation of heritage lamp posts are going on simultaneously, AC Nagaraj said and added that the tenders for the works have been awarded to two contractors to complete the works soon besides stating that out of the total 86 properties to be demolished, 84 properties have been demolished so far.

Due to high density of vehicles, especially during peak hours, the road used to witness frequent traffic jams and snarls as it was very narrow for the present day traffic thus causing a lot of inconvenience to motorists and the pedestrians alike.

As the road was witnessing huge traffic jams almost every day, the MCC had decided to widen this rather narrow road from 12 mts to 18 mts.