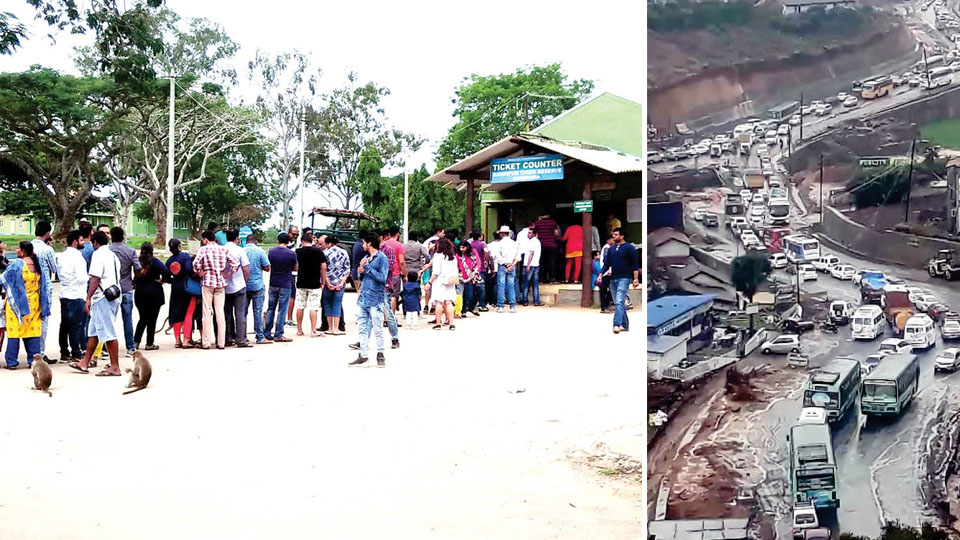 Gundlupet: One of the tourist destinations that never fail to impress the tourists are the wildlife sanctuaries. The tension and delight in spotting the animals in the wild is what makes these visits an adventure. In the light of the summer holidays, like every year the Bandipur National Park and the neighbouring Gopalaswamy Betta are the major attractions. Most of the tourists, en-route to Ooty, the hill station in neighbouring Tamil Nadu, known for its cool weather are stopping at Bandipur.

Thousands of tourists are visiting Bandipur National Park (which is considered one of the most beautiful and better managed national parks of India) every day from morning itself and go on Safari rounds which begin at 7.30 am and ends at 9.30 am. The open buses and jeeps which ferry the tourists deep inside the forest is full of excitement as herds of deer, elephants and bison never fail the watchers.

The forest fire that occurred two months ago, destroyed swathes of forest land and wealth and had brought immense agony to the wildlife lovers. Fortunately, the safari zone was spared of forest fire. Added to this, it has been raining since the last one week which is once again turning the arid region green. The greenery all round is inviting the tourists with open hands.

Similarly, during the evening safari which begins at 3.30 pm, tourists with their children queue up before the ticket counters. The greenery all round is drawing herbivorous animals to come out in the open to graze and as they are used to the tourists watching them. They go about their daily routine with hardly a sideways look at them even as the visitors start clicking on their mobile phones. But one always looks to spot a tiger in the wild which only very lucky ones get to see it in all its majesty.

Gopalaswamy Betta: The visitors to the other tourist attraction the Himavad Gopalaswamy Betta is also increasing. The devotees gather in front of the temple and watch the panoramic view that it offers.

One can watch many water holes from the hill and if lucky, can see herds of elephants quenching their thirst and also playing with water at these water holes.