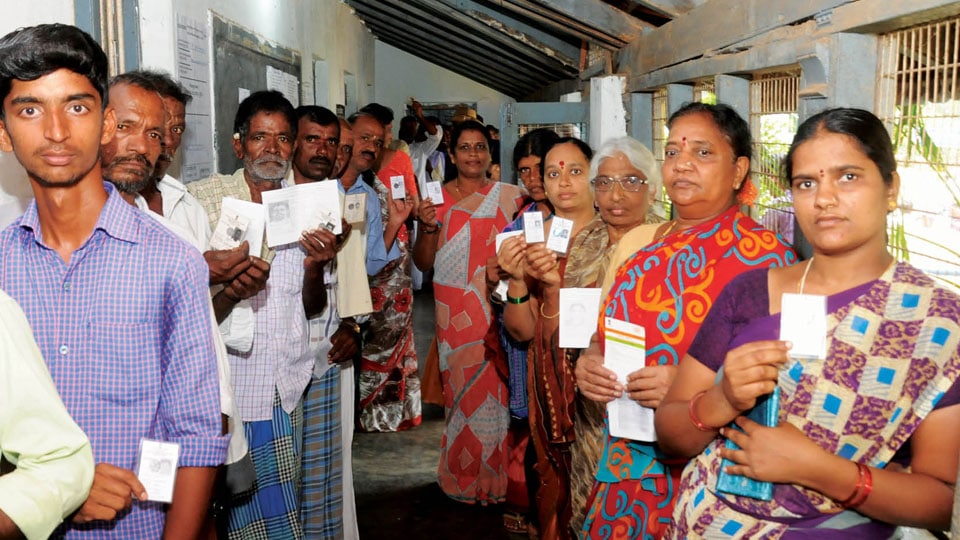 The most traumatic part of India’s elections is the post-vote waiting — a whole month this time.  BP levels go up even for those not involved in politics because the results are going to affect everyone’s life.  Tensions are especially high in the present case because there is going to be a lot of surprises.  The campaign itself had surprises.  Looking at some of them will help us cope with the stress of waiting.

Multiple surprises took place in Kerala, beginning with a turnout of 77.68 percent, the highest in three decades.  In several booths voting went on till 10 in the night because of malfunctioning voting machines on the one hand and long queues on the other. Across the State, 13 people waiting in line fell down exhausted and died.  In a VVPAT machine in Kannur, there was a snake, its party affiliation uncertain.  An unpleasant surprise was the high number of faulty machines.  There were several complaints of the vote going to the BJP no matter which button was pressed.  Officials refuted the charge.

But machines having a mind of their own was the big surprise of this election.  Although many complaints were raised in Kerala, the most worrying case appeared at the other end of the country.  In Assam, former Police Chief Harekrishna Deka himself complained that the VVPAT slip showed a name different from what he had voted for.  He then found that if he wanted to challenge the discrepancy, he had to pay Rs. 2.  If the subsequent inquiry did not prove the validity of his complaint, he would face six months imprisonment.  He didn’t proceed because, clearly, the system was configured to give the voter no reasonable remedy if something went wrong with the machine.  This kind of arbitrariness can only help a party that is in power.

In UP, the surprise this time was the BJP proclaiming publicly that it would disregard caste as a factor in ticket allocation — and doing exactly the opposite. Tickets were given carefully distinguishing Yadavs from Jatavs and preparing a picking order of Kshatriyas, Jats, Gurjars, Vaishyas, Bumihars as well as Dalits and Backward Classes and Brahmins.  Every sitting MP who was dropped was replaced by a nominee of the same caste.

Surprising, too, was the openness with which the BJP gave up its 2014 slogan:  Development. The plank this time, with no pretensions, was communalism.  The shift was clear in the vocabulary itself.  In the relatively accommodative culture of the South, Karnataka’s BJP leader Eshwarappa declared that his party would not give tickets to Muslims.  More bluntly, Amit Shah described refugees from unacceptable religions as “termites.”  Yogi Adityanath described them as “green virus.”  In Barabanki in UP, BJP leader Ranjit Srivastava went really crude.  “In the past five years,” he said, “Prime Minister Modi has made attempts to break the morale of the Muslims.  Vote for PM Modi if you want to destroy the breed of Muslims.”  He went on to make further statements too shameful to be quoted here.  Primitive minds running riot with immunity is a danger signal.

From the Congress side, Sheila Dikshit came up with a surprise. She is 81, has a heart problem and is scheduled to go to France for surgery.  She has enjoyed Chief Ministership of Delhi for 15 years.  Despite all this, she still wants positions of power and got a ticket.  She muscled her Congress Party into ostracising the Aam Aadmi Party when a joint effort would have been the best way to check the BJP. Age is no bar to personal ambitions rising above party’s and country’s interests.

READ ALSO  After the Elections: Musings on Criminals in the House!

Perhaps the biggest surprise of this election season is the immunity with which Shri Narendra Modi has been breaking the Model Code of Conduct.  Using the army’s name for election-related work is barred.  But the PM has been repeatedly exploiting Pulwama and the return of fighter pilot Abhinandan Varthaman.  After casting his vote, he went on a road show and gave a speech, both violative of the rules.  But this is India.  The Prime Minister is the Prime Minister. Ruminating on this unsurprising surprise, we can wait for the big surprises of May 23.