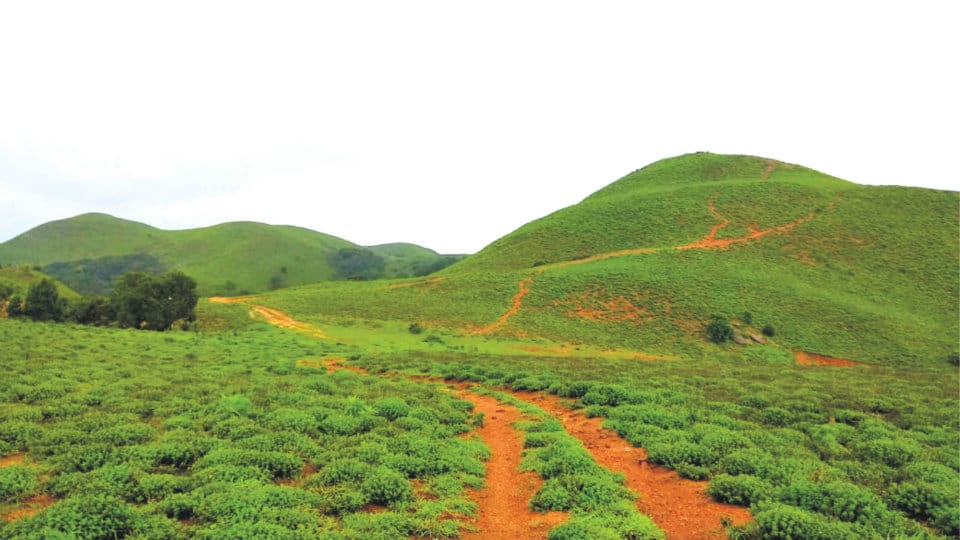 Entry to Mandalapatti banned till Aug. 31

Madikeri:  Kodagu, apart from being a tourist destination, is also a hotspot for trekking. The district, which is an adventurer’s paradise, has a dozen trekking spots that provide an offbeat experience to visitors.

Ever since the floods and landslides that devastated the district last August, all hilly terrains have been the focus of District Administration. Deputy Commissioner Annies Kanmani Joy, based on the report submitted by officials who are closely monitoring day-to-day rainfall pattern, has banned entry of tourists and public to Mandalapatti from July 24 to Aug. 31.

The ban orders have been imposed under the provisions of Disaster Management Act 2005 and those who violate the orders can be penalised. Mandalapatti is one of the most sought after tourist locations in Kodagu at a distance of around 15 to 17 kilometres from Madikeri.

According to villagers, the name Mandalapatti means that the place where ‘Heaven meets the Earth’ and the tourists who visit the area are spellbound by the serene beauty, accompanied by mist that the nature embraces in its arms. Mandalapatti is a part of Pushpagiri Reserve Forest and the place has become a famous four-by-four jeep drive spot to the top.

In a report to the DC, Madikeri Tahsildar and a team of officials have stated that the Devasthoor-Kaluru-Mandalapatti road is prone to landslides and the soil at present is loose as it is raining continuously. The road from Hebbatageri that leads to Mandalapatti has already witnessed landslides and it is not safe for public movement.

Also, the hills surrounding the road might collapse any moment, the report stated. In case of landslides the roads have to be cleared and regular tourist movement will hamper relief and rescue operations, the officials have stated in their report, based on which the DC has issued a ban.

According to the statistics provided by the District Administration, Kodagu has so far received 863.78 mm rainfall and there is a shortage of 35.62 percent. Despite this, the administration is geared up to face the natural calamity in full steam. 24/7 control rooms are monitoring the situation closely and officials are keeping track of complaints and woes received through WhatsApp.

Emergency road repair on Mysuru-Bantwal National Highway 275, landslide clearance, water and electricity supply restoration works have been carried out on a war-footing. Rs. 5 lakh compensation has been sanctioned to the family of M.T. Prakash of Karnangeri village. Prakash was killed on July 8 when a tree fell on him while at work in an estate.

Also, Rs. 5 lakh solatium has been granted to the family of Riyanath Noushad, who was killed when a tree crashed on her house at Bhadrakola village near Virajpet on May 31. Till now, two persons (M.T. Prakash and Riyanath Noushad) have lost their lives to rain disasters, three cows have died and 75 houses have been damaged.

Sandbags have been placed in the regions known to be vulnerable to landslides. Earth-movers and excavators are kept ready along with personnel to manage emergency situations, said officials. The National Disaster Response Force (NDRF) personnel, who are camping in the district, visited vulnerable areas and have conducted recce to review the situation.

Temporary arrangements will be laid using sandbags if road connectivity is cut off due to landslides.

Kodagu Mandalapatti
What’s in a name?: Will Yeddyurappa be fourth time lucky as Yediyurappa?
No salaries for Government staff ?