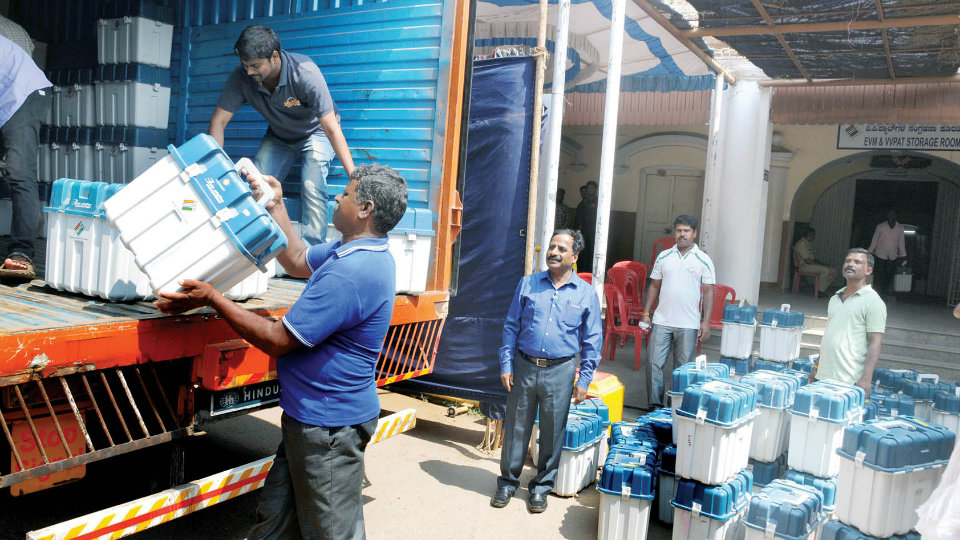 Mysuru: With hardly a month to go for the clash of titans in the Lok Sabha Elections, the Election Commission, aided actively by the ground-level implementation officers are fully geared up for the festival of democracy by ensuring the poll process is glitch-free.

While a massive exercise has begun to sensitise voters by Systematic Voter’s Education and Electoral Participation (SVEEP) officers, a set of officials are ensuring that the Model Code of Conduct is implemented stringently with no room for electoral malpractices. Another set of officials are ensuring that the Electronic Voting Machines (EVMs), Voter Verifiable Paper Audit Trial (VVPAT) machines and other electioneering machines and equipment are reaching all booths, district treasuries and taluk treasuries.

The machines will be kept at the respective District and Taluk Treasuries and strong rooms and will later be shifted to local-level booths. The shifting operation was carried out under strict surveillance and was supervised by EVM Nodal Officer and CEO, Karnataka Exhibition Authority Girish, Joint Director Food and Civil Supplies Department Shivanna who is also the Assistant Returning Officer, H.D. Kote, Election Tahsildar, DC Office Paramesh and Deputy Tahsildar, DC Office Nizamuddin.

Election officers have begun the process of randomisation of officers. In all, 14,000 officials and staff will be used for the electoral process and all their names are being listed and sorted out. The names are procured from the Human Resource officers of the respective departments like Education, Revenue, Police and others.

The names and designations, place of residence and place of work is fed to the TRIES Software at the ZP Hall and mixed. The mixing process ensures that there is transparency in selecting officers without fear or favour. A list of 14,000 officers is being made and mixed to allot the booths in eight Assembly segments coming under Mysuru-Kodagu Parliamentary constituency.

An extra 10 percent of officers (1,400) will be kept as waiting list and another 10 percent of employees will be reserved. Exemption from poll duty will be given only to those employees who have genuine reason like illness, pregnancy, neo-natal mothers and other genuine cases.

Complaints including missing names in voters’ list, selfies and civic issues were registered via the Election Commission’s cell phone app ‘c-VIGIL, which were rejected by the poll officials. The cell phone application allows citizens to register complaints about election code of conduct violations in their areas. However, of the total 28 complaints, 13 were rejected as they did not concern the poll code of conduct.

The app is yet to become popular and according to the authorities, they hardly receive any complaints from the public regarding the model code violations. The authorities, however, are confident that the use of app is expected to pick up in coming days.

“The app is designed in such a way that the pictures or the videos will be uploaded along with the location from where it is taken, which will help the authorities to track the complaints quickly. The complaints will appear in the dashboard of the area election officers and the authorities can monitor all the complaints from any place and ensure timely action with the help of flying squads,” said Additional Deputy Commissioner Anuradha who is the  Deputy Electoral Officer.

The complaints, if genuine, are forwarded to the booth level Assistant Returning Officer who is expected to take action within 100 minutes. “There must be more awareness on the c-VIGIL app,” she said and added that the complaints will be forwarded to the State Election Commission for further action.

Another official said: “After downloading the app, some people try to test it by posting irrelevant pictures and selfies. These are mostly anonymous persons, who don’t provide their phone numbers. These cases are dropped.”