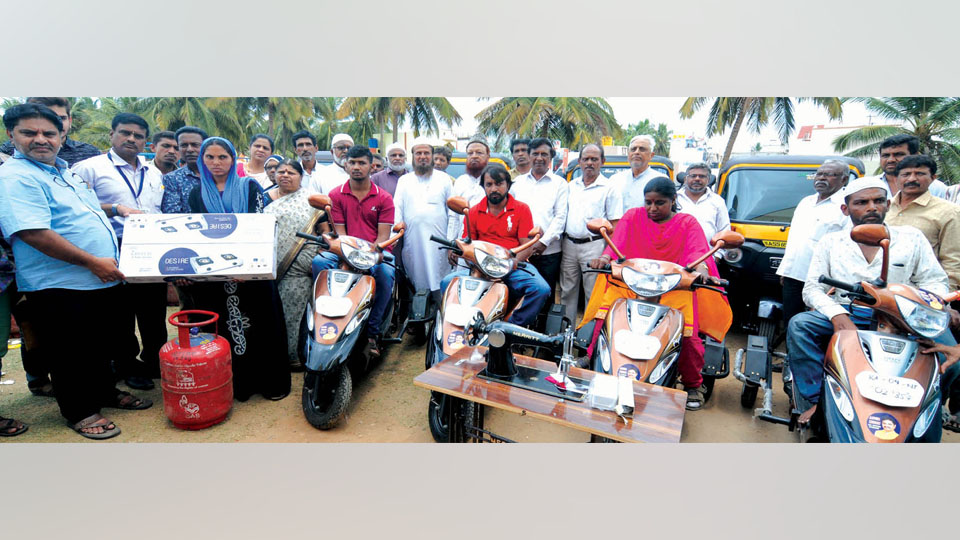 Mysuru: Former Mayor and Corporator Ayub Khan distributed various facilities including cooking gas and autorickshaws to the residents of Ward No.52 on Mar.17.

He distributed these facilities at a function organised at Udayagiri’s Ambedkar Samudaya Bhavan to some of the beneficiaries. Apart from cooking gas cylinders to 80 persons, he gave sewing machines to 25 women, autos to four persons and eight specially designed three-wheelers to physically-challenged persons, all worth about Rs.15 lakh.

Ayub Khan said that there were many people who belonged to the economically weaker section and irrespective of the caste or religion, the facilities were provided to all, after identifying them.

“As a Corporator, Mayor and Ruling and Opposition party leader, I have been able to serve the people of Ward 52 only due to the blessings of residents. Hence, by providing necessary amenities to the poorer sections of society I have been able to retain their confidence. In my Ward people have been living in harmony without discrimination of caste or religion,” he said and added, “My service is not limited to just Ward 52 but to the poor people of N.R. Constituency as a whole.”

Ayub Khan Ward No.52
Will step up vigil on Naxal activities in Kodagu: IGP
Congress-free Karnataka is our target, says Meerut MP