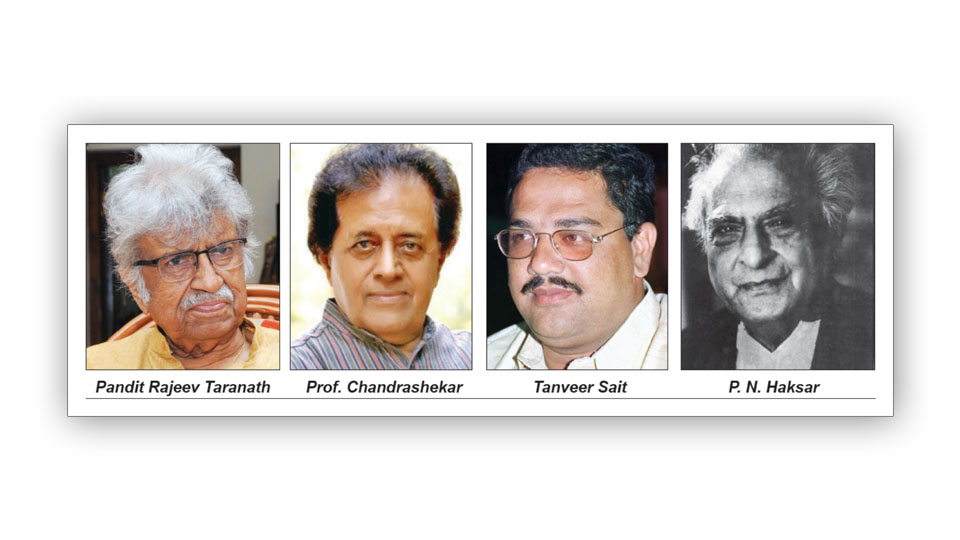 Last evening I journeyed to Rangayana, like it was a pilgrimage, to see Pandit Rajeev Taranath, the Sarod Maestro par-excellence, whose birthday it was. The venue, a small auditorium Bhoomigeeta, was overflowing with music connoisseurs, Taranath’s old friends and admirers. I was one among them.

The programme was to celebrate Karnataka’s celebrated Sarod Maestro’s 85th birthday followed by a performance by the artiste. It was a programme organised with the support of the bureaucracy — the Karnataka Sangeetha Nritya Academy, Bengaluru, Rangayana and Kannada and Culture Department, Mysuru, with the wholehearted backing and help from his innumerable friends and admirers from here and elsewhere. For me, therefore, it was no surprise to see the former bureaucrat, an IPS  officer C. Chandrashekar, who was the Police Commissioner in Mysuru, receiving me with a broad smile, camera ready in hand as I arrived at the venue. It was Chandrashekar who first introduced me to Taranath when he arrived in Mysuru to settle down for good some years ago.

The chief guest was indeed a heavy-weight, a Jnanpith awardee, Dr. Chandrashekhara Kambara. The oracle of accolades for the Sarod Pandit was underway when another Chandrashekar arrived, Prof. B.K. Chandrashekar, Oxford alumnus and a former Congress Minister of Karnataka. He is a contemporary of Pandit Rajeev Taranath, when they were studying in Mysuru.

As a mark of recognition and respect to the former Minister, considered an intellectual among the politicians, who had travelled all the way from Bengaluru — taking four-and-a-half hours as he announced — he was invited to speak though his name was not in the printed invitation.

In his booming deep-throat of a voice which naturally gets the attention of the audience, he began to speak — yes, those were the days spent in the famous Coffee House in city. And then, he suddenly, even apologetically, slipped into a mode of confession and repentance. Jesus, I said to myself.

The gist of what he said was nostalgia. He was recently requested for a transfer of a disciple of Pandit Taranath who is  presently teaching in Karnatak University, Dharwad, to Mysuru but could not succeed. He blamed the bureaucracy. “Ketta bureaucracy.”

The transfer was, probably, sought because it would help the disciple to pursue her passion at the feet of her Guru while it would also be of personal help to the master in his ripe, old age. Like a typical Indian politician, he was simply passing the buck and I, as a journalist, could see through the hypocrisy of it all.

But then the question that should stare us in the face is: Should our politicians in authority — MPs, MLAs, Ministers et al — feel so impotent and helpless before the bureaucracy?

“No”, will be the answer if the politician is hard-working, honest and pro-people. Only when the politician in power or out of power is incompetent, always depending upon the bureaucrat for advice and guidance, unable to understand the administrative system, the law and rules, that he becomes a pawn in the hands of his subordinate bureaucrat.

In this case, Prof. B.K. Chandrashekar was a former Congress Minister now out of power. At present Congress is ruling the State. Yet, Pandit Taranath could not find a ‘human face’ (that Dr. Manmohan Singh, former Congress Prime Minister, spoke of) either in Prof. Chandrashekar or in his Congress government to help an old artiste.

Prof. D. Javaregowda (Dejagow), former Vice-Chancellor of Mysore University once told me how a Co-operative Society District Registrar of Shivamogga was misleading the then Chief Minister  Kengal Hanumanthaiah, with whom he was working as Secretary, and how the bureaucrat was put in his place and relief given to the supplicant.

Recently, our Primary and Secondary Education Minister Tanveer Sait showed who was the boss to a bureaucrat. The Director of the Department tried to be smart with ulterior motive (you know what!). There was a meeting with the Minister and the supplicants. The Minister gave a letter in an envelope to the Director with instructions  to do the needful to the supplicant who had come from a far away District. The Director, sheepishly said, “Yes, Sir. I will do it today itself.” However, as they were dispersing, the Director, holding out the cover towards the Minister, said, “Sir, it is better if the Government’s approval is taken.”

An annoyed Tanveer Sait told that errant, apparently corrupt, bureaucrat: I am the Government. Go and do what I have given in writing.

That was Tanveer Sait, son of our former Minister Azeez Sait. I knew his father. Apparently, chip off the old block.

This is not to paint the bureaucrats in black using the same brush. There are gems that I have seen. Personally speaking, in my early days, about 35 years back, I had wanted a transfer to my lecturer-wife to Mysuru on genuine humanitarian ground. I approached my two college-mate politicians in power, visited Bengaluru roaming around Vidhana Soudha for nearly a year. Then it was Prof. G.T. Narayana Rao, who wrote a post-card to his friend in Mangalore, a Muslim gentleman and a retired IAS officer, who got the posting to Mysuru within a month.

When P. Manivannan was a DC here, there was a toll-gate mafia operating, officially, of course, at the Chamundi Hill temple. I brought it to the notice of Manivannan personally. He investigated and then took action before the patron-politicians of the contractor knew what was happening. If the access to the temple is free now, thanks to Manivannan. However, I heard there is a renewed attempt by the local Panchayat to re-introduce the toll collection. We are warned.

Now let me go to Delhi. It is alleged that in negotiating the Shimla Accord of 1972, after the Bangladesh War, the Pakistan Prime Minister Zulfikar Ali Bhutto outwitted our Prime Minister Indira Gandhi. The bureaucrat and Indira Gandhi confidant P. N. Haksar was held responsible for it.

There was a one-to-one secret negotiation between Indira Gandhi and Zulfikar Ali Bhutto over Kashmir and the only man privy to the secret was P.N. Haksar. What transpired in that secret meeting, supposed to solve the Kashmir problem, remains a mystery till this day as neither Indira Gandhi nor P.N. Haksar told us what it was. Again, an example of “Ketta bureaucracy” that Prof. B.K. Chandrashekar spoke of.

Finally, politicians must remember that in a Democracy the weakness of a politician is the strength of bureaucracy. Don’t blame the bureaucracy, become strong instead.