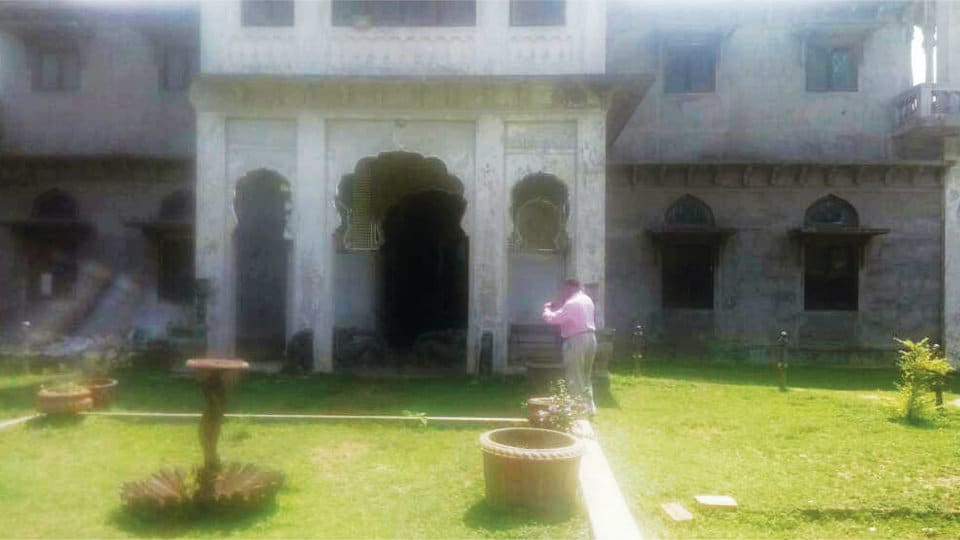 Rise and Fall of a Royal Property: Rajendra Vilas Palace

Mystery of a temple tower and palace-dome!

I may mention here that I had written an Abracadabra column under the title mentioned above on11th February 2016. I will just mention the relevant point. The dome of the Palace was built taller than the Vimana Gopura atop the tower of Chamundeshwari temple close by. The chief priest of the Palace and also the Chamundeshwari temple had warned that it should not be constructed that way. But the architect who designed it ignored the warning of the priest about the fault line in its vaastu.

I do not know if one should go by this, apparently, superstitious belief but if this Palace is going to be renovated then it is best to follow the advice of the priest.

The boast of heraldry, the pomp of power,

And all that beauty, all that wealth ever gave,

The paths of glory lead but to the grave.

These lines of eternal truth rang in my ears as I visited the Rajendra Vilas Palace atop Chamundi Hill yesterday morning. A young friend of mine called me to ask if I would be interested in visiting an old Subramanya Swamy Temple (a small shrine under a Peepal Tree) atop the Hill not very well-known to people. I did not evince much interest as it was the morning hours, time to go to another kind of temple. A temple where work is worship — my office.

“Where is this temple?”

“It is at the Rajendra Vilas Palace Hotel,” my friend said.

“Why not? If you are interested, I will try. Who will not allow…”

As I waited for my friend Raghavan of Raghulal & Co., Pharmacist, memories of the  old glory of this Palace as a 4-Star hotel came rushing to my mind. In the 1970s and early 80s, my brother Dr. K.B. Subbaiah of the Mission Hospital with his wife Swajie used to take me to this hotel in his Red Ford Escort two-door car for dinner whenever I came from Bombay or Pune as a bachelor with a long, flowing hair, side-burn and all.

If my memory serves me right it was Welcome Group of Hotels of ITC which was managing it. It was a dream world, except the wind velocity was high sometimes and it would be very cold as night slipped into deeper darkness around. The city 1,000 feet below, used to glow like a star-lit sky. The moon would also emerge from behind the clouds competing with the stellar sky. The liveried waiters at your beck and call served you humbling themselves. Food, fit for Gods but available to mortals like us. What a place to dine!

Glass work on the ceiling.

Alas, soon by 80s it was not there. Closed? The young Wadiyar decided to manage it himself. By 1977, I had shifted to Mysore for good, but never got a chance to visit this hotel — because it was closed or had lost its allure as a hotel. I learn it remained a hotel until 1999.

Some years before the passing away of Wadiyar, the scion of the Royal Family, Srikantadatta Narasimharaja Wadiyar, on Dec. 10, 2013 much money seemed to have been pumped in to restore the crumbling imperial Palace perched atop the Hill. In around 2008, Srikantadatta Narasimharaja Wadiyar began renovating this Palace, an iconic structure rising from atop the North-Eastern peak of Chamundi Hill, visible more prominently from the city than the famed Sri  Chamundeshwari Temple.

How I wished Wadiyar was business-savvy and had renewed the lease with the Welcome Group or Tatas or whoever was running it. But then Wadiyar had always imagined he was his own business-expert, architect, marketing man and all else that went with a genius in business and commerce. That he failed was history like his own dynasty.

This newspaper in its Weekend Star Supplement dated 6th September 2008 had dealt on this Palace in detail. Wadiyar had wanted to make it a Heritage Hotel with a fine blend of Indo-Saracenic and Rajasthan styles of architecture. The latter style, you guessed — walls and ceilings embellished with garish coloured Katori style glass-works — diamond-shaped, square cut and blistered. The four chhatris (minor domes) surround the central dome in four corners and I saw them crumbling and plaster peeling off exposing the iron rods like ribs of a human skeleton. Sad.

… the legend. A brass plate indicating the room numbers.

Neither the Wadiyars nor the Government could save this legendary heritage building built in the 1820s. Here is a sample of Srikantadatta Narasimharaja Wadiyar’s, I don’t say ego, measure of self-confidence. In the said 2008 interview a question was asked:

READ ALSO  Panama Papers: The ghost of corruption will destabilise our country one day and then... - 2

SOM: Where are the architects from?

Wadiyar: The architect is  sitting in front of you (laughs).

SOM: What about the interiors?

Wadiyar: The designs are given by me, the concept has been done by me, the execution is done by someone else. This project is my baby.

SOM: So what are you now? A politician, an official or a hotelier?

Well, well, my heart was bleeding looking at the run-down, neglected condition of a Palace that once blazed the Mysore Royal splendour attracting VIP visitors and tourists.

To another question, “Won’t it be easier to just give it to… who have been successful at managing grand hotels?”, Wadiyar gives a detailed answer. In gist: “We are not interested in giving it off to someone else. It is my property and I will take care of it. To add, I have the pleasure of doing up the place. I have spent a lot of time and effort for this project.”

What happened? Dreams are achievable only if they are pursued with a serious sense of pragmatism. May be, the present perception of the people of Mysore is that the Princess, now queen mother, Pramoda Devi Wadiyar is wiser by her experience and more pragmatic in attending to the affair of her Palace, Royal Family and innumerable real estate properties like this Rajendra Vilas Palace and many others in Ooty, Bengaluru and elsewhere.

With her adopted son Yaduveer Krishnadatta Chamaraja Wadiyar marrying from a royal family, in keeping with the dynasty’s tradition, one may expect a turn-around in retrieving, reclaiming, renovating and restoring of all these grand properties to its splendour with modern touch, turn them into hotels or some other commercial property thus providing employment opportunities to our people.

5 COMMENTS ON THIS POST To “Rise and Fall of a Royal Property: Rajendra Vilas Palace”