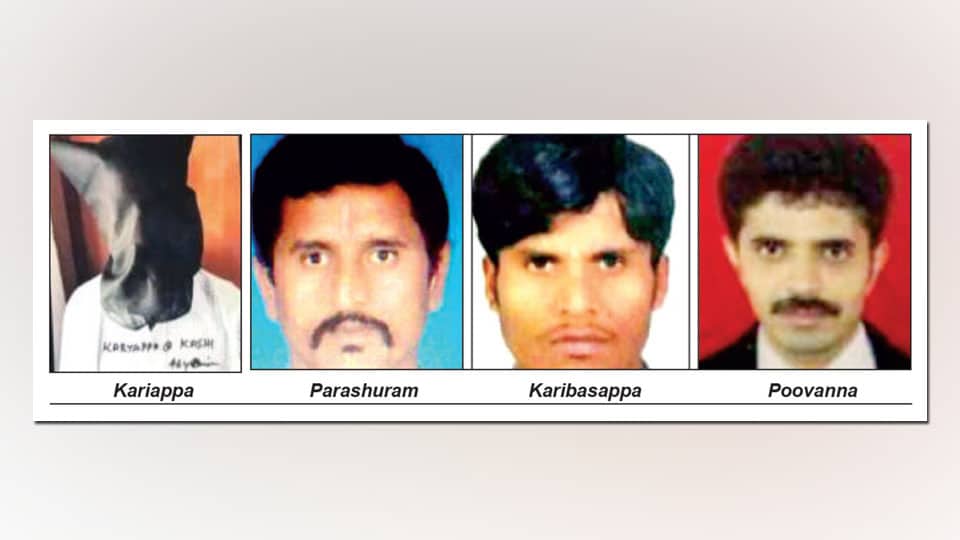 Mysuru: In a joint operation, the Special Investigation Team from Mangaluru City Police and Kodagu Police have arrested four accused in the sensational cash delivery van robbery case. The arrests were made yesterday at Kumbara Gadige village in the Pushpagiri reserve forest of Somwarpet taluk in Kodagu district. Rs. 6.3 crore cash has been recovered from them.

Four persons of SIS Prosegur Holding Pvt. Ltd., private cash transfer firm, were accused of making away with Rs. 7.5 crore that was meant to be shifted from Axis Bank’s Yeyyadi branch in Mangaluru to the Koramangala branch in Bengaluru on May 11. After the incident, the firm’s Mangaluru branch in-charge, Ranjit, filed a complaint against driver Karibasappa, custodian Parashuram, and gunmen T.A. Poovanna and T.P. Basappa at the Kankanadi Police Station.

Speaking to reporters in Mangaluru yesterday, Mangaluru City Police Commissioner M. Chandrasekhar said that the accused were arrested near a forest area about 20 kilometres from Somwarpet. He said that the mobile tower location, CCTV camera footages from Mangaluru and Somwarpet helped them to corner the accused. “We have spread the dragnet to arrest the other accused,” he said.

He said that Police teams were sent to Bengaluru, Madikeri, Mysuru and Chitradurga to trace the accused. Following reports of them hiding in Somwarpet, the Mangaluru Police took help from the Kodagu Police in gathering local intelligence and traced the men to the forest area. Most of the stolen money was hidden near their hideout.

Kodagu Superintendent of Police Rajendra Prasad helped in the investigation along with his team from the District Crime and Investigation Bureau (DCIB). “While a few accused are yet to be arrested, Parashuram is currently being questioned. The investigation team has solved the case in record time and Rs. 6.3 crore has been recovered,” he said.

According to him, the investigation so far has not suggested that any bank employee was involved. On the alleged lapses in transportation of cash, including the absence of GPS facility in the transporting vehicle, he said such aspects would be looked into after all those involved are arrested.

Parashuram has claimed that he was forced into the act after being assaulted. The accused had carried the cash on public transport from Hunsur to Kodagu after transferring the cash from trunks to bags.