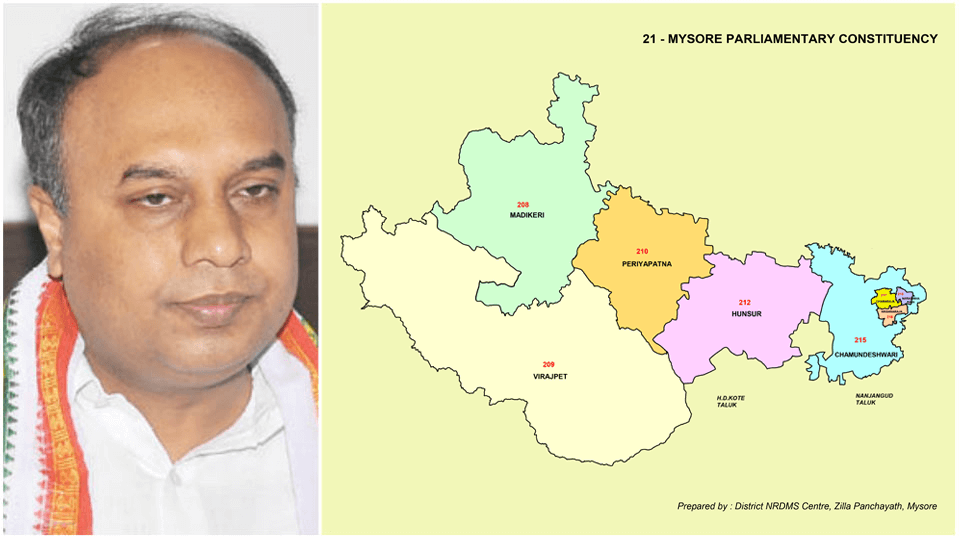 Exit of A.H. Vishwanath from Congress: Who will represent Congress in Mysuru-Kodagu Lok Sabha Constituency?

Mysuru: With former Member of Parliament and senior leader Adaguru H. Vishwanath quitting Congress to join Janata Dal (Secular) there is inevitability for the Congress party to find a suitable candidate for the 2019 Lok Sabha elections from the Mysuru-Kodagu Parliamentary Constituency.

Vishwanath, a former Congress MP, quit the party as he was unhappy the way he was treated after Congress, under the leadership of Siddharamaiah, came to power in Karnataka. Probably, Siddharamaiah has a candidate in mind to be the Congress party’s choice for the Constituency in the next Parliamentary elections. People who are aware of Siddharamaiah’s political moves and strategies say that he always keeps such decisions close to his heart till the last moment.

Whatever the case may be, today the political analysts of this Constituency see Supreme Court Advocate, Congress Spokesperson and Legal Advisor to Karnataka Government Brijesh Kalappa as a suitable candidate who can win the seat for Congress.

There are three reasons for the political pundits to see Brijesh Kalappa as a winning horse for the Grand Old Party. Firstly, his unflinching loyalty to Congress and his close association with Congress Vice-President Rahul Gandhi and also the Supremo of Karnataka Congress Siddharamaiah. Secondly, he belongs to an ethnic minority Kodava community and his election would represent Kodagu and Kodavas, a prominent community in the district and other communities as well.

Another reason that could favour Brijesh is that no candidate from Kodagu has been given a Parliamentary ticket by any national political party since 60 years. But for C.M. Poonacha, who was the Chief Minister of Kodagu C-State and who went on to become Union Railway Minister, nobody else entered the Parliament from Kodagu.

According to political pundits, the main reason for a BJP candidate to win in Mysuru-Kodagu Constituency is the pro-BJP votes polled in Kodagu. Analysts say that if Brijesh Kalappa is a Congress candidate, Kodagu voters might vote for him as he is a Kodava, son of the soil and he can represent all communities in Kodagu better in New Delhi.

All things considered, Brijesh Kalappa should be an ideal candidate for this Constituency and well-qualified too. A rank student in State PUC, he came out of the Bangalore Law School, worked in the office of the well-known Supreme Court Advocate Kapil Sibal and now independently practicing in the Supreme Court. He was also in the panel of Karnataka Advocates who argued the Cauvery-Krishna-Mahadayi water dispute cases in the Supreme Court. It is, therefore, not surprising Chief Minister Siddharamaiah appointed him as the State Legal Advisor with the rank of a Minister of State. For these reasons, the party sources say, Brijesh Kalappa might  be party’s choice.

ONE COMMENT ON THIS POST To “Exit of A.H. Vishwanath from Congress: Who will represent Congress in Mysuru-Kodagu Lok Sabha Constituency?”