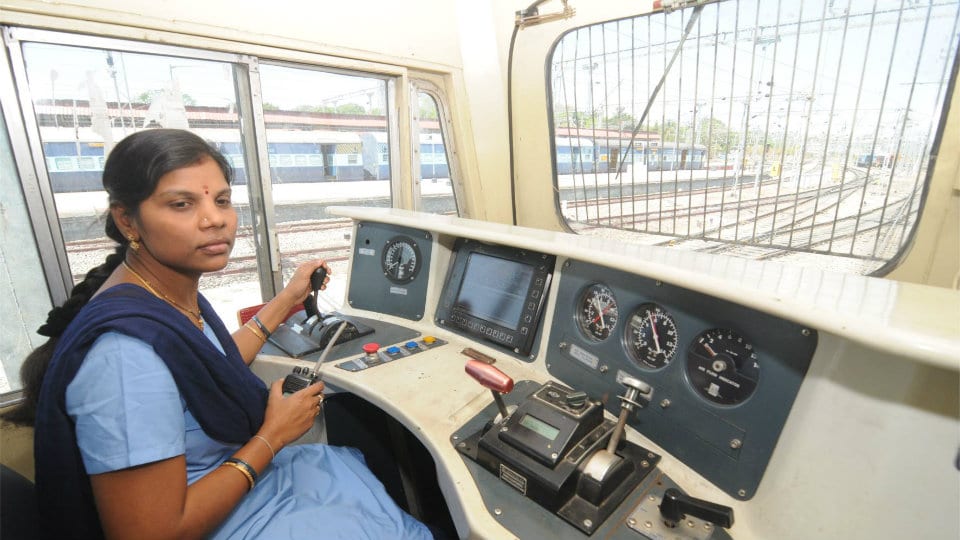 Experiencing the joy of piloting train

Mysuru: She is the first woman loco pilot in the Mysuru Division of the Railways. Meet B. Usha Someshwari as she sits confidently in the loco cabin of the diesel engine. She has been piloting the trains since the last nine years and her experience so far has been one of sheer joy.

Speaking to Star of Mysore on International Women’s Day today, Usha said, “I have full support from my family and they are co-operative. Both my children, a son and a daughter also are very understanding.”

Hailing from Vishakapatnam in Andhra Pradesh, Usha and her husband P. Raman had both joined the Railways at the same time after a six-month training. However, he got the job first and was posted at Tiruchanapalli. Later, when she got her posting in Mysuru, her husband also joined her here. She has experience of piloting both the goods and passenger trains and she covers Hassan, Chamarajanagar, Shravanabelogala to name a few of the Stations. “Unlike driving rashly on the road exceeding speed limits, we cannot afford to do that while running the train. There is a speed limit and every kilometre the speed is checked and we have to maintain it,” she said.

Asked how she reads the signals when the lights turn to red or green, Usha said that there is no signal alert in the loco cabin and hence she is in constant touch with the guard in the last cabin through walkie-talkie.

Usha says that though it is very challenging to be a loco pilot, she would not hesitate to recommend jobs to women as it is very exciting and full of adventure.