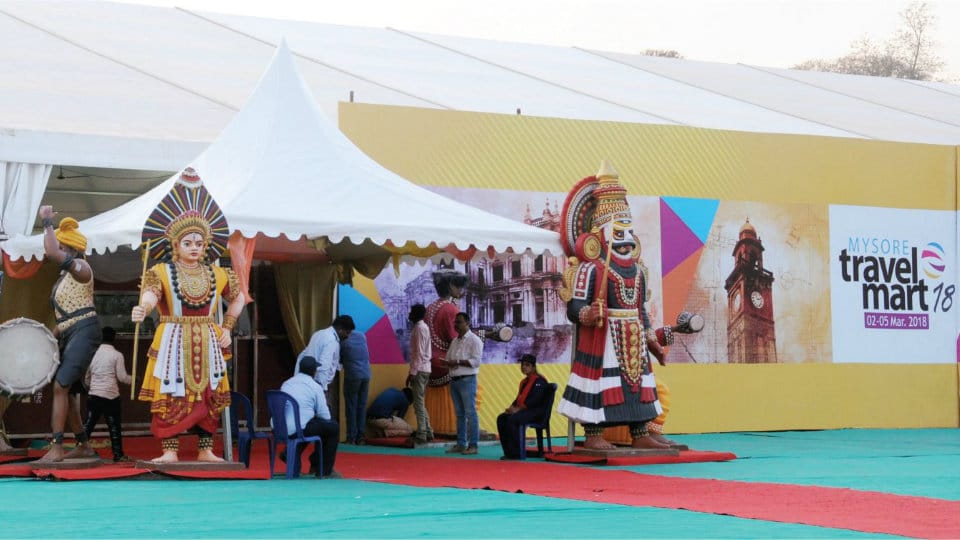 What was unique about the  4th edition of the Travel Mart held in J.K. Grounds, Mysuru this year? It was the presence of the Union Minister of Tourism [independent charge] K.J. Alphons, as chief guest. Mysore Travel Mart is organised by the stake-holders of tourism industry and very conspicuous by their absence were the Karnataka Tourism officials. Amazing show and that too without any active financial and moral support from the local Karnataka Government. The only local representative was a Dy. Director Rank official ! Where were the Mayor, the local MLA or the Secretary [Tourism]? Mysore Travel Mart was not a private function but a public function where the Union Minister had come officially representing the Central Government.

I have travelled with Union Ministers on official tours of different States. They are pampered by the local States since the Ministry has huge funds at their disposal which the Minister can distribute at his whims and fancies. Frankly, first time I have witnessed a situation where a Union Minister was completely ignored and neglected by the State Tourism officials and that too when he had come on an official visit.

One can understand, the local MLA and other politically connected persons not attend the function due to their political affiliations, but did the officials also get discreet instructions not to attend this function which benefited Mysuru? The Government of India has enormous funds at their disposal and we just have to tap them to get projects for this city. For example, Brindavan Gardens require a lot of funding for its renovation and the State does not have that kind of money. What is required is some local initiative and enterprise to get a good DPR [Detailed Project Report] done to get the funding for such a huge project.

Alphons did notice the absence of the local Minister and officials and mentioned it in his speech. It was heartening to see him admonish someone on the front seat for using the cell phone during his address. He also warned some sections of the crowd that he would walk out if they did not keep quiet. Tourism in India is growing at 15 percent when it is growing at 5 percent all over the world. Karnataka and Mysuru have had a negative growth of nearly 5 percent  last year. A matter of grave concern. 40 percent of Mysuru depends on tourism and hence it was important that Alphons be given his due respect of his position and the Government of Karnataka failed to do so.

The Incredible India Campaign-2 is about to take off and this occasion could have been used by the Karnataka Government to impress  Alphons to include Mysuru in that campaign.

I fail to understand the demand for a Convention Centre in Mysuru, when Bengaluru with an International Airport does not have one? One requires direct international and several domestic flights to a city to make the Convention Centre viable. It is a huge investment and is not at all viable at present with a single flight in and out of Mysuru.

In Delhi, there is a saying Mantri ka ishaara kaafi hai. For example, in a casual conversation with his PA, if the Minister mentions that he likes  Mysuru masala dosa, the news goes round and thereafter one can see Mysuru masala dosa in every meal served to the Minister. Taking a cue from this, I observed that Alphons was very animated when he was discussing the 30 second video the Ministry has made on Yoga. Ten days discussion for a 30 second film ! This clearly indicated  that yoga is very dear to him.

The Minister’s suggestion to the local travel agents to make a 30 second video is a positive one. The existing video can be slickly and professionally edited. Taking the cue from the Minster’s speech, the new video should be slick and modern too.  Some more photos of yoga can be incorporated in the video instead of the dances shown against the backdrop of the Palace.

Recently I saw an article about a yoga student from Mysuru who has won several gold medals in yoga competitions. Why not do a new photo shoot with her in front of the Palace? The title of the video “Incredible India-Mysuru.” Once the Minister approves the video, the babus in the Ministry have no say in the matter. If this video becomes a part of the Incredible India Campaign, Mysuru can reap rich dividends.

The title of  “Yoga Capital” is slowly going out of our city. It is time all the yoga centres in the city bury their differences and unite to conduct an  International Yoga Festival in Mysuru, an annual affair, a combination of spiritual and yoga, a novelty. I am sure that the Central Government would partly sponsor this event, considering the Minister’s liking for this subject. Please unite for the sake of Mysuru otherwise Rishikesh would gradually take over the crown, as hinted by the Minister.

Last but not the least, a small piece of advice for the organisers. Please leave politics to the politicians, personnel opinions should not be aired on public platforms. I was also disappointed that big travel agents of Mysuru like Salian and Mahalinga did not participate in this Mart. One should try to bury the difference and project a united front for the sake of Mysuru.

The list of buyers does look impressive and I have been informed that some “fam” tours have been arranged for these visiting travel agents. Good luck to the organisers Prashanth and Jayakumar, who have put up an excellent show with their limitations. I wish that they take up the challenge of the Minister and do try to conduct a spiritual and yoga fest in Mysuru this year ?