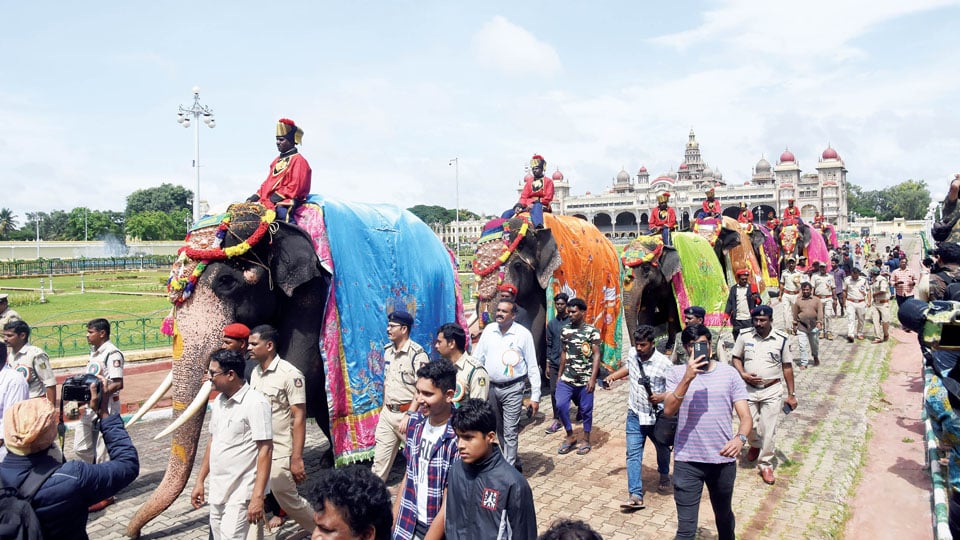 This year, the Government in its wisdom decided to celebrate Dasara in a “grand way.” Excellent news for the general public,  all the stakeholders of the tourism industry and the officials of course. Though I am a born  optimist, of late looking at the way the Department of Tourism is operating, I am losing all hopes of revival of this industry, at least in Karnataka.

First, the formation of a permanent Committee of Dasara is a lip service. Privately no one in the Government wants to implement it. One may ask, why? Simple. If you notice, all the works pertaining to the Dasara festival are done in the last moment, favouring a few select contractors at inflated costs. A permanent committee would chalk out a year’s work in advance and  the tendering process would be as per rules in the present system. Everyone is happy — the officials, the contractors and, of course,  the political bosses too. At the same time they do not want to go against the public sentiments. So as usual the politicians  talk about it in every public forum and forget about it the moment they get out of the venue.

Devaraja Market and Lansdowne building renovation: The Government sometimes has to take tough decisions and it is not possible to please all. There will be arguments and valid points on both sides — one for demolition and some against it. But a decision has to be taken or it is possible the Government is waiting for some more mishaps to happen before taking a decision? Narasimha Rao’s policy: “Not taking a decision is also a decision making process.”

Recently an estimated Rs.10 crore was spent on repair and maintenance  of roads  due to the visit of the Prime Minister to this city. Typical of all Government Departments. But the fact is that good roads were relaid. The bad roads still full of potholes are waiting for the visit of some other vvip. Maybe this Dasara, these works would be taken up. The road leading to Brindavan Gardens is in shambles. The only way this road can be permanently repaired is by requesting the President or the Prime Minister to make a visit to these spots.

I have worked in a Government organisation and this is the way they operate. In Ashoka, Delhi, for instance, if the Prime Minister or the President was to visit any banquet or conference hall, the whole hall will be spruced up, painted and repainted. If Prime Minister liked Rajanigandha flowers, the same would be procured at any cost. The food also would be prepared keeping in mind the vvip’s food taste buds.

You will be surprised to know that when I was in Lalitha Mahal Palace Hotel, if I had spent lakhs of rupees on change of curtains and bed spreads for a visit of the Prime Minister, I would not be asked any questions by any audit. Typical Government.

READ ALSO  Tourism on the Rise

The word “grand” has different meaning for different people. For general public and the officials involved, the total budget allotted gives an indication of the money available for spending.  This year, the Government also has allowed the local administration to collect donations from different companies  towards the  Dasara funding.

One look at the various Sub-Committees one can visualise that the Dasara is going to be the same this year also. The elephant march, the same folk dancers, the tableaux, the illumination etc. All the Sub-Committees are packed and headed by Government officers with hardly any exposure to any international or national events. So what do they do. Just repeat the same events year by year.  There are so many dynamic young ceO’s of companies who are widely travelled and working in the city. Why were they not invited in the Committees?

Getting foreigners in huge numbers to the city is the mission of the Government. Foreigners plan their trips at least one year in advance. So this year’s Dasara can be a platform for the next year if it is planned that way. A list of 30 to 40 travel agents [ceo or decision-makers] with families should be prepared. An invitation in the name of the Chief Minister should be sent to these travel agents to come and witness this year’s Dasara as guests of the Government. The cost of their  accommodation and travel should be shared by the local hoteliers and transporters since they are also the stakeholders in this venture.

One day before Vijayadashami, all these dignitaries can be honoured with silk shawls and Mysore Peta in the Palace by the Chief Minister or the Tourism   Minister. One can also take these dignitaries around to lesser known destinations like Melukote, Gopalaswamy Betta, Somanathpura etc.

It is time the Tourism Department appoints well-known photographers to shoot the Dasara festivities and make 30 second visuals of the event.  The Private Durbar of the Prince is a big draw. It can be marketed exclusively to get some high-end gentry to the city.  These  visuals can be used next year by April or May in the National TV channels to get the well-heeled domestic travellers to the city.

For any event to be called a success, it is important not to get the local milling crowd but also some well heeled gentry to the city for the event.

There are some travel writers across India. They should be invited as Government guests to give their opinion and write-ups on Dasara across different magazines and newspapers  pan  India.

All the above suggestions hardly cost any thing but it requires co-ordinated efforts from the Tourism Department and  the local travel agents and transporters.  These are low-hanging  fruits and should be plucked. And they will give the necessary results for Dasara next year with visitors, both international and domestic, flocking to the city.

Every year, the spectacle of the political class clamouring for passes has become a routine affair. A status symbol. For some popular events, the complete seats are taken over by the officials and Police families and people who have paid for the seats are left standing.

The Dasara procession is too long and requires trimming — a mindset of quality over quantity. Anyone listening?

If Rs. 30 crore is spent instead of Rs. 20 crore, does it make an event grand?  Most of the officers deputed on the Sub-Committee report to the Deputy Commissioner. So the net result is that they look upon him to guide them.  We have hardly 45 days for the Dasara. So what do the officers do? Simply dust the old files, copy and paste the events.

9 COMMENTS ON THIS POST To “Grand Dasara – A Mirage”