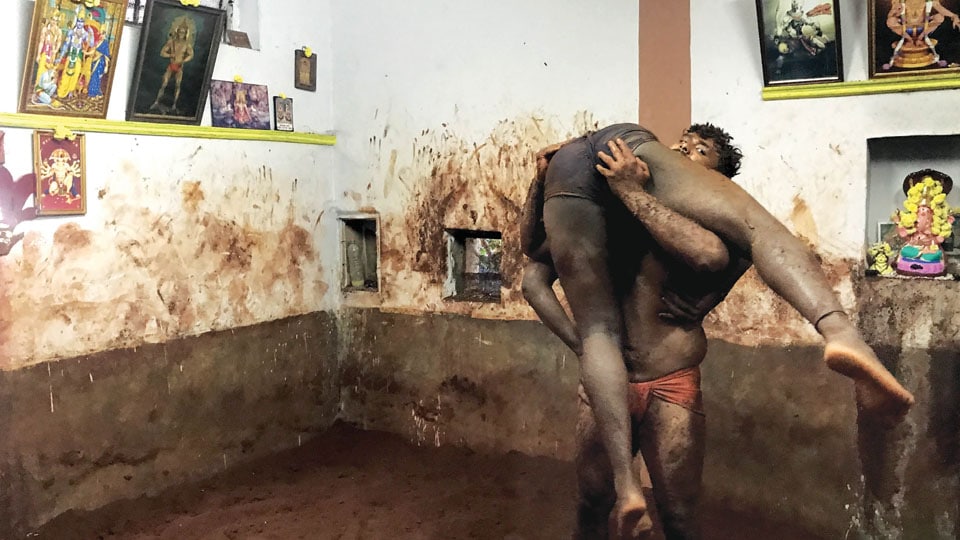 Kusti or wrestling has its roots dug deep in Mysore since the time of Kings. The erstwhile rulers patronised this sport and Kusti has enjoyed a royal heritage status. With a loin cloth firmly fastened around the waist, Pailwans engage in Naada Kusti.

This city that was once a hub of wrestling and Garadi Manes (wrestling house) is slowly undergoing a decline as it fights to revive the sport. The Garadi Mane is a royal essence of Mysore and there is a huge cultural history backing it.

The sport which has no discrimination based on religion and caste has been an integral and a much-anticipated event of the Mysore Royal family. With loin cloth around the waist and mud decorated on the entire body, Kusti offers more than just a competitive fight. It is all about living the tradition, passion for the game and respect to one another.

The loin cloth or ‘Komana’ is generally received from a senior wrestler or Ustad in a Garadi after prayers are offered to Lord Hanuman who symbolically represents strength and courage.  The soil in the Garadi is mixed with ghee, herbs, turmeric and vermilion. The wrestlers offer puja to the mud and wash their legs before they step into the Garadi. With such rich tradition and culture, Kusti tries to establish itself amidst other sports.

Speaking to Star of Mysore, Yajaman Pailwan S. Mahadev, who has generously dedicated his life to Kusti said, “We need to retain the traditional game and make it popular. We need to retain Mysore’s Kusti culture, heritage and status. Kusti has been an integral part of Mysore Royal family and it is being practiced since more than 400 years.”

In his blood and veins

Kusti is immersed in the blood and veins of Yajaman Pailwan Mahadev, as his father Kusti Kalaratna Pailwan A. Shiva Nanjappa was an ace wrestler and a true ambassador for the sport. Mahadev nostalgically says, “I was introduced to the sport when I was around 8 years and when I turned 15, I actively started participating in tournaments. It has been a wonderful journey.”

Tracing the history of wrestling, Mahadev says that Mysore Dasara Kusti used to take place behind the Palace. After 1954, the event was shifted to Old Exhibition Grounds. Later in 1968, it was moved to J.K. Grounds and subsequently to Sahukar Chennaiah Kusti Akhada in 1974. Since 2003, the event has been consistently conducted at the D. Devaraja Urs Multi-Purpose Stadium (in Dasara Exhibition Grounds).

“The sport has seen a lot of transition over the years and it is we who have to ensure that this culture is retained. During my time as an active wrestler, the winner used to be awarded Rs.6 and Rs.4 in case of a tie or draw. Participating in Mysore Dasara Kusti event was in itself a great achievement or recognition those days. The competition used to take place for over a month and the total cash prize allotted for the event used to be around Rs.3,000. In the current scenario, the entire tournament wraps up within a week and the amount allotted for the winners is somewhere close to Rs.35 lakh,” he reveals.

He adds, “In this one week, there will be Point Kusti as well as Nada Kusti or the traditional Kusti. Dasara Kusti Sub-Committee has introduced titles such as Dasara Kanteerava, Dasara Kesari, Dasara Kumar and Dasara Kishore in order to promote the sport and encourage participants.

Garadi Manes have been the real essence of Mysore since those days. There were more than 150 or even 200 Garadi Manes in Mysore but with the passing of time and the commercialisation of the sport, currently there is only 40 to 50 Garadi Manes in city.

Yajaman Pailwan Mahadev has been a resourceful person to Dasara Kusti and has played a vital role in organising tournaments, aiding and guiding Pailwans, encouraging youngsters to participate in Kusti and has published articles on the sport. Since 40 years, he has also been organising renowned Kusti competitions annually at Suttur Sri Kshetra Jathre. He has a deep sense of belonging towards this sport and has dedicated his time and life to ensure the growth and development of the sport.

Mysore and Kusti definitely ring a bell, and the pages dates back to erstwhile era and remind us of the magnitude and prominence of the sport. It is noteworthy that many Kusti enthusiasts, Pailwans etc., over the years have played significant roles to ensure the development of the sport and the art behind Kusti.

Kusti has also been well received by fans and movie buffs on big screens. Dangal, Sultan and the recently released Kannada movie Pailwan starring Sudeep have been super hits. With awareness being created about the sport into the young minds and public, there is definitely a brighter side to the development of the sport as grass-root sport. With right measures in place, Kusti is bound to slowly creep back to its heights.

M. Narasimhamurthy has documented Kusti, its history, tradition, growth, achievements of Pailwans, tournament history, etc., with the main focus on Karnataka and Mysore Kusti and has published several books in Kannada.

Some of his well-known Kusti books are ‘Malla Prapancha’, ‘Pailwana Jagatinalli’, ‘Kusti Rangada Digajagalu’ etc. He has also recorded and published several folk songs with Kusti as theme. He said, “Those days, Kusti was a normal affair in almost every household. Doctors, lawyers and film actors all used to practice Kusti and used to train in Garadi Manes. Even Kannada matinee idol Dr. Rajkumar used to practice Kusti. We need to retain this sport.”

Many wrestlers in Mysore climb steps of the Chamundi Hill early in the morning. This tradition has been followed since many generations and even today it is relevant. Ranadheera Kanteerava Narasaraja Wadiyar (1634), who has been a real patronage of traditional Kusti used to climb the steps of the Chamundi Hill with a buffalo calf on his shoulders.

“Kusti is a desi sport and it involves a lot of skills. It has a strong emotional connect and attachment among people. Hence, it is difficult for organisers to conduct and manage the event,” adds Narasimhamurthy.

He has also researched and written books and articles related to sculptures in Karnataka, especially in Hampi that are based on Indian style Kusti and cinemas based on Kusti.

Ittige Gudu Hathu Janara Garadi, located on the opposite lane of Mysuru Zoo, is over 135 years old. This Garadi Mane embraces the traditional sport and wrestlers actively train here round-the-year. Here, they do not charge any fee for training and there is no discrimination based on religion.

READ ALSO  Chief Minister to arrive in city this evening

Pailwan Chandrashekar, who is a trainer and in charge of this Garadi, said, “Ittige Gudu Hathu Janara Garadi has a rich history in Kusti. It has trained several wrestlers over the years and even today many people train here. Several famous Pailwans, who have taken care of this Garadi, are Pailwan Vishwanath, Pailwan Shiv Nanjappa, Pailwan Narayan, Pailwan Somasundar, etc. Dasara Nada Kusti and Dasara Mat Kusti has been an integral part of Mysore Dasara sports. I have been a wrestler myself and I have been training students for about 20 years.”

Kusti has a lot of health benefits. Right from head to toe, the body is completely conditioned. Gym is all about body show and it also causes stress, aches on the body and leads to drop in energy levels. Kusti maintains all-round fitness and the mud has healing properties and is good on the skin. Wrestlers who train in mud do not have any wrinkles on their face. Even a wrestler who is above 60 years and has trained since his youth days in Garadi will not have any wrinkles on his skin, he adds.

Commenting on the commercialisation of the sport, he adds, “The focus has shifted towards Point Kusti in recent times. The Mud Kusti is slowly losing its importance as it has very less incentives. To retain this sport, we need more support. The cost of a healthy diet for a Pailwan is about Rs.500 to Rs.1,000 per day. Mat Kusti has come into fame quite recently, but traditional Kusti can be traced back to the Hindu mythological era.”

“Here, at our Garadi, we do Matti Puja on Varamahalakshmi Day and also Amba Thai Puja. Our wrestlers take part in several competitions in Greco-Roman style, Point Kusti and also Nada Kusti. They have won several laurels in Haryana, Maharashtra, Punjab,” he says.

Mysore Bhuthappana Garadi, Sunnadakeri, is also a Garadi Mane which is over 100 years old. Currently, there are around 15 to 20 members who are actively training there.

Pailwan Amruth Purohit, Dasara Kusti Sub-Committee President, who is also the trainer at this Garadi, said, “Modern Garadi or Mat Garadi has slowly come into the picture. In the State and National Games, Mat Kusti is conducted. Though the techniques of Mat Kusti are same as that of Mud Kusti, rules are different. The ethics of clothes are different. In Point Kusti, players wear different coloured jersey or wrestling costume during a match. But in Matti (mud) Kusti, they have to wear the traditional loin cloth. Also, there are several additional moves, skills and techniques that are a part of Matti Kusti but are not used in modern Kusti.”

Pailwan Amruth Purohit has taken part in several competitions and has won laurels from 1982 to 1996. With mastery in wrestling skills, he is a three-time Gold Medal winner in the Dasara Kusti competitions in the 62-Kg weight category. He has also taken part in many competitions across India in Nada Kusti, Mat Kusti and has played over 200 games. After 1996, he has continued his love and passion for the sport as he ardently nurtures and motivates young wrestlers with his guidance as a trainer and coach.

He adds, “In this year’s Dasara Kusti competition, there will be Point Kusti, Nada Kusti and Maar-Peet Kusti. While other forms of Kusti are based on time constraints, Maar-Peet will have no time restrictions. The match continues until there is a clear winner. Many wrestlers from Punjab and Haryana are taking part in Dasara Nada Kusti this year. Daily 30 pairs are taking part in Nada Kusti after 4 pm starting from Sept. 29 to Oct. 4. Point Kusti is conducted from 8 am to 2 pm.