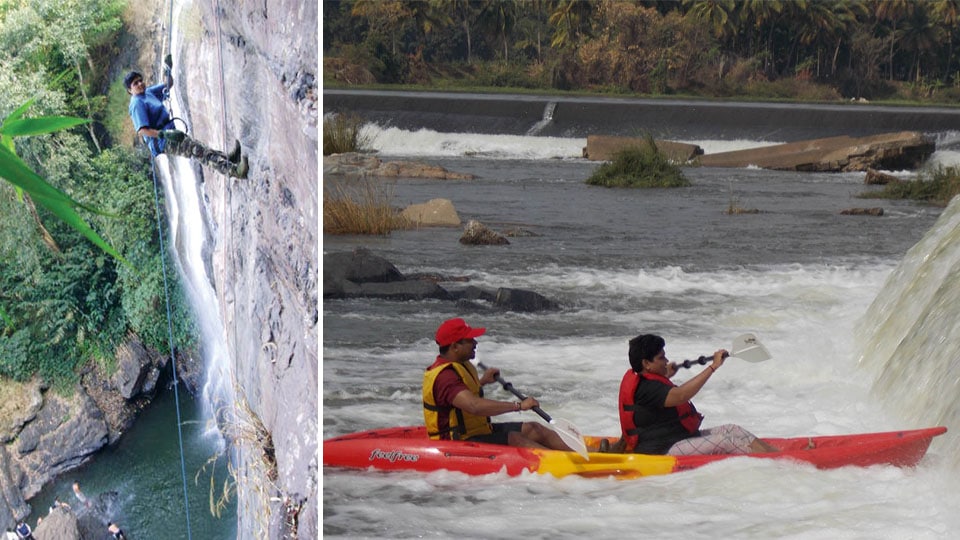 Adventure flows in her veins

The biggest adventure is to live life off the edge, a life filled with dreams where there is a constant adrenalin rush in your blood and you conquer your inner fears and challenge yourself to extreme tasks. While there are many adventure enthusiasts across the country, here is a woman from Mysuru who has dedicated her life to adventure activities. This is her inspiring and gripping story.

Rukmini Chandran has scaled heights, conquered skies and ventured into less-travelled roads, all for the love towards adventure. She is an NCC Glider Pilot, first and only woman Parasailing Instructor in India, Paragliding Instructor and is trained in Free-Flight and Powered Hand Gliding.

She is also a terrestrial adventure sport instructor where she teaches Trekking, Rock Climbing and Rappelling, River Crossing and Mountaineering. As an Aqua Sports Instructor, she practices and imparts lessons in White Water Rafting, Kayaking, Water Surfing and Skiing.

As a young girl, Rukmini was an integral part of the Scouts and Guides. Eventually she joined NCC Army Wing. Her craving towards adventure kick-started from there. During NCC camps, she learnt Rifle Shooting, and excelled in it.  She also mastered Trekking, Rock Climbing and Mountaineering after her training in Darjeeling.

When she was in her II PUC, she was a part of the first batch of the Girl’s Air Wing in NCC and received training at Mandakalli Airfield (now Mysuru Airport). After her marriage in 1984 to M. Chandran (now late), her journey into adventure picked up pace. Her husband was also an adventure enthusiast and was the first Indian to test the Hand Glider from Chamundi Hill in 1977. He was deputed to the State Government (Youth Services and Sports Department) to train civilian youths through General Thimayya National Academy of Adventure (GETHNAA).

This was a huge transition in adventure sports, as until then (1989), it was available only for NCC cadets and Defence personnel. Rukmini says, “Since I was trained, I worked as an assistant to Chandran for the State Youth Centre as an Aero-Sports Instructor. I started an Adventure Club- ‘Almanac Adventure Nest’ in 1989. During those days, ropes were not available. I used to prepare cotton ropes and thermocol life jackets which had an element of risk. Then I was introduced to Water Sports at GETHNAA. I received advanced training in White Water Rafting, Kayaking, Wind Surfing, etc. As Kayaking boats were expensive, I started Country Rafting where I filled air in truck tubes, tied them with bamboos and travelled 15 kilometres from Visvesvaraya Canal at Pandavapura.”

During her visit to Darjeeling, she saw several camping equipment and made up her mind to manufacture them using locally available materials for her adventure club. In 1999, she started stitching them.

It was in 2001 when Rukmini’s life stared at her when her husband met with an accident during microlight flying and suffered brain injury. She now had the additional responsibility of taking care of her husband’s health along with her three children. She managed this challenge with a practical approach. 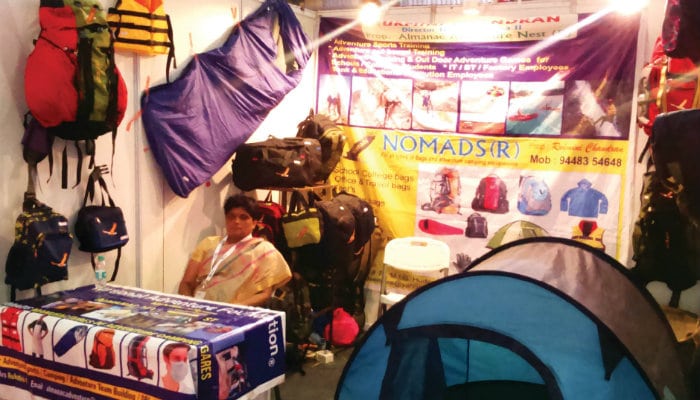 She says, “In 2004, I started Nomads, a company that manufactured bags, adventure equipment, jackets, life jackets, college bags, laptop bags etc. It was IT boom then and employees were working hard during weekdays and escaped to wilderness during weekends. So there came a demand for outstation programmes and our club till date conducts adventure-based programmes for them as well as several private schools where they interact with nature, perform adventure activities and understand their strengths and weaknesses. I started generating revenue when I began my career as a woman entrepreneur”.

Adventure sports is different from normal sports as you compete with self, overcome your fears and dare to participate in the sport where you feel racing heartbeats. But once conquered, the inner devils are left behind and a person tends to find himself immersed in the glory of achieving it. She adds, “Schools should introduce adventure sports as a specific subject in their curriculum just like the Army schools and it has proved to improve concentration, self-strength and discipline. I do not know why Government schools refuse such programmes in spite of it being completely State-sponsored.

READ ALSO  Up close with Somdev

However, private schools come to us for activity camps. We organise group activities like building your own raft, country rafting, trekking, rock climbing and other sports.” 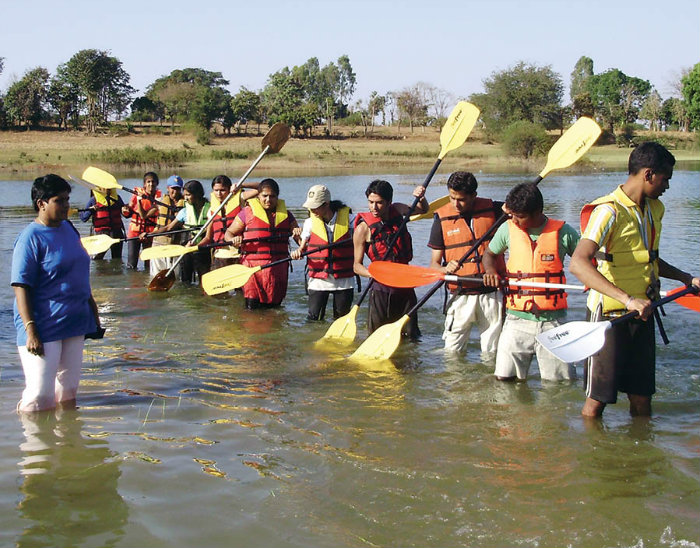 In 2004, National Adventure Foundation recognised Almanac Adventure Nest as a Karnataka Chapter for adventure and Rukmini was appointed as the Director for Karnataka Chapter and she became the first-ever woman Director. In 2015, she took loans and bought six Juki stitching machines from Japan to stay on par with her competitors who produced adventure-related equipment.

She wants women to be self-sustainable and conducts self-employment training, skill upgradation programmes and promotes women empowerment. Rukmini has been recognised and honoured by Chamber of Commerce, State Cooperatives, Federation of Karnataka Chambers of Commerce and Industry, Electrical and Electronics Manufacturers Association, Government of Thailand, etc. 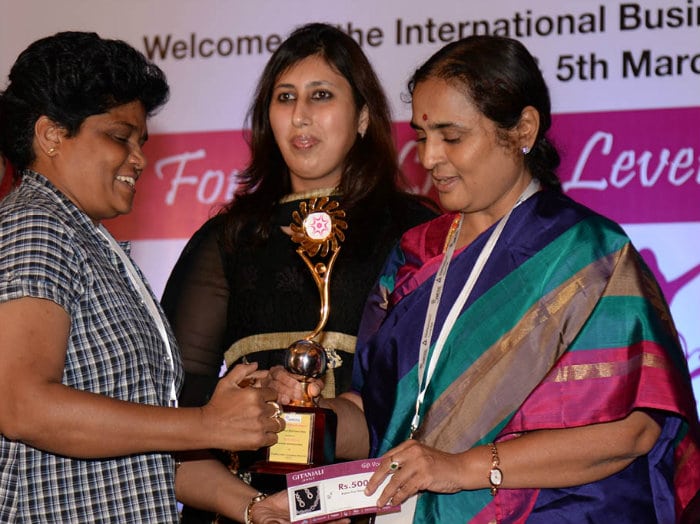 “Mysuru is a tourist hub but the youth needs a change. We have been promoting only Palace and Zoo. Aero Sports like Paragliding, Parasailing and Microlight Flying first started here. But everything stopped since 2008 just because a couple of accidents took place due to their own negligence. Instead, they should cancel the licence of that particular negligent organisation. Permission must be given to registered clubs with a fixed fee amount and insurance should be ensured. Even trekking and rock climbing in Chamundi Hill has been stopped.  There is a huge need for an adventure park in Mysuru.”

On her part, Rukmini has been making consistent efforts by writing to the government to revive adventure sports in city.