Home » Feature Articles » Art exhibition on the concept of ‘Outsider’ 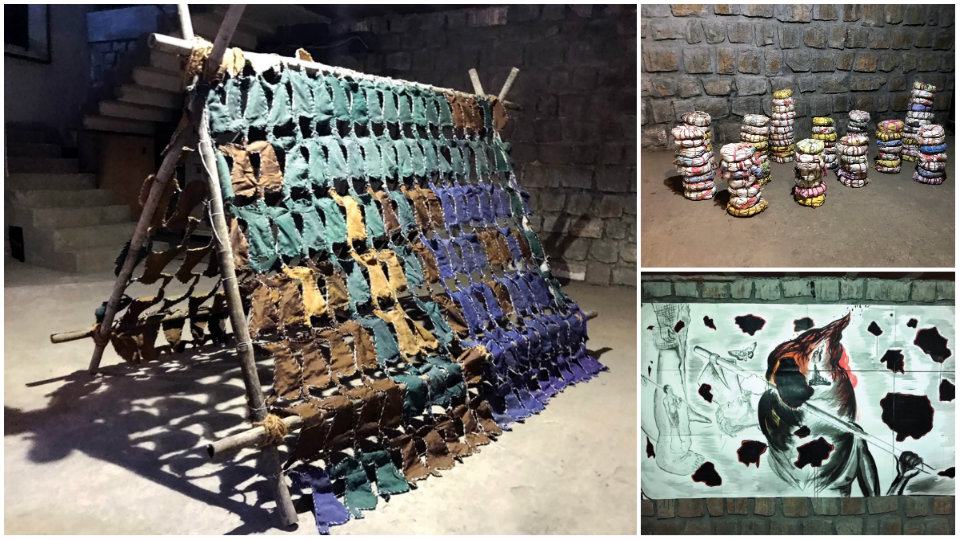 Art exhibition on the concept of ‘Outsider’

Zero Eight 21, an art group from Mysuru, in collaboration with Clark House Initiative, Mumbai, has organised an art exhibition with the theme ‘Outsider’ in the hall below the Badsha’s Pride on Nelson Mandela Road from Aug.4 to Aug.12. Both these groups pave a path for those who seek representation.

Coming from an inherent need to connect and merge the borders and interact between other cultures to spread curious intention towards each other, this synergy between individuals from both Mysuru and Mumbai aim to expand context and be both within and outside, as a part and apart.

Speaking to SOM, Prabhakar Kamble, Artist & Curator, Clark House Initiative, Mumbai, said, “The historical context of cities such as Mysuru and my hometown, Kolhapur, has similar practice of social justice since pre-Independence. These cities were pioneers for making the system of social justice that is the reservation and representation system which was a policy put in place in both the cities by its authoritarian ruler. Looking at both these cities, its history marks not just a remembrance but also an initiation of a connection that when carried forward, the same dots of equality among all of us while looking into the idea of collaboration as an outsider, it has more contentment than just the series of exhibition.” 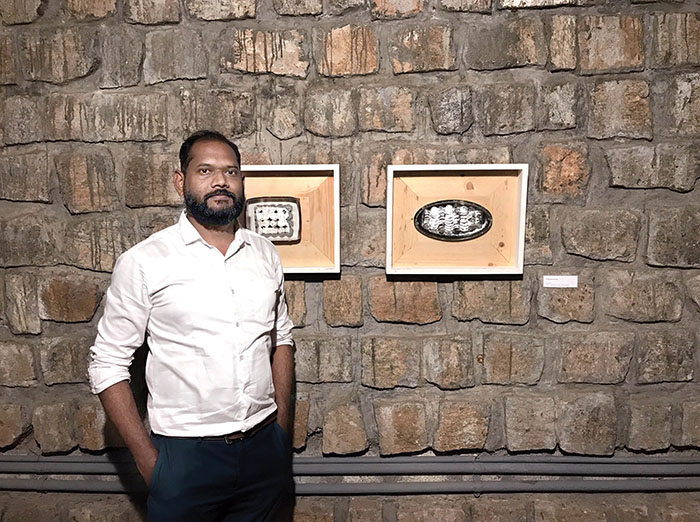 Prabhakar Kamble seen with his work ‘Sweet box’ where he has used silver foil paper, coins and a sweet box.

To be an outsider one must feel to as an insider somewhere. Under the name of community, we are still separating society and dividing certain people from an imagined mainstream and keeping them out of power and position one way or the other. This concept of division works under the name of religion, caste, community, race, gender, colour, belief etc. Women are also being considered as an outsider in the society and has been denied equality since a long time. It creates distance between physical, psychological, geographical and the social “you”; it reflects the undercurrents of the overall damage of our culture and humanity that we are facing as outsiders and witnessing its repercussions. This is a platform where we share our art and knowledge which is far away from the contemporary world, he said.

Here in the expo, some of them dealt with history, their existence in it as an insider and outsider. Jithinlal re-reads history through his drawings; K.S. Nahusha and Raghu Wodeyar are the Mysuru and Bengaluru based artists respectively, who are conceptual artistes doing performance art. Ranjeeta Kumari & Birender Yadav have works on their own reading and research of socially, economically and educationally backward workers dealing with questions of exploitation. Mayuri Chari talks of her own experience and understanding as a woman where she sews and makes drawings of her own body parts on cloth. 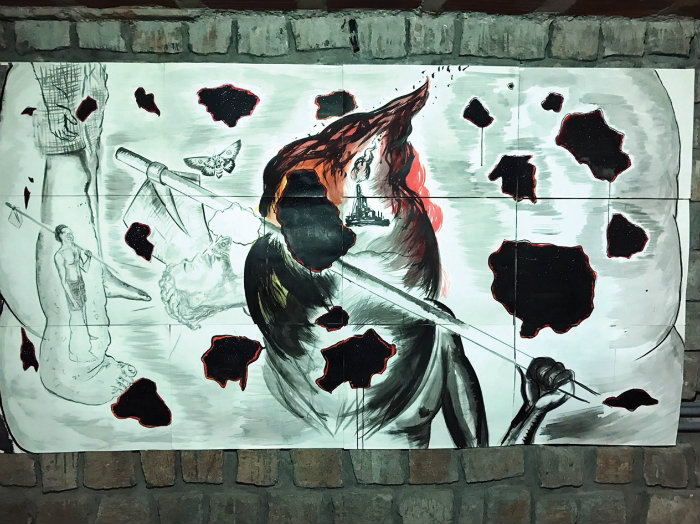 Jithin Lahiri’s masterpiece titled ‘Wounds and Stars’ depicts the hardships of people and their dreams.

Sudharak Olwe, who received Padma Shree for his great contribution in photography and activism, narrates the whole story of people’s fight for dignity — ‘Justice delayed is justice denied’ which is the series of documenting atrocities on Dalits in Maharashtra, ‘In search of dignity and justice’ which is the untold story of Mumbai’s conservancy workers and ‘11th Lane Kamathipura’ — Life in living hell which is the stories of prostitutes. Amol K. Patil, Yogesh Barve, Prabhakar Kamble have strongly expressed their voice against the social inequality through their performances, texts, videos and installations. Shiva Gor work deals with sculptural installations, drawings and text on the cultural memory of his own nomadic community. Through his works he explores culture, language and aesthetics of his community. 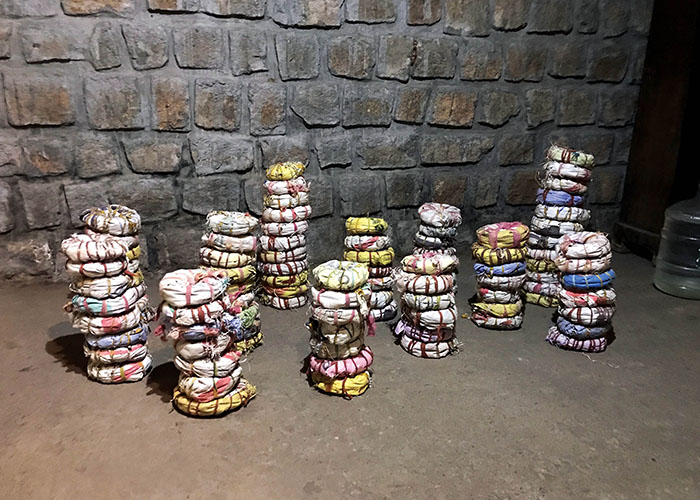 Ranjeeta Kumari has collected the ‘Vinda’ used by labourers on their head to carry materials while constructing buildings. The artist portrays that the ones who build houses for us have no place to live.

Sudhir Rajbhar, conceptual artist, socially and practically engaged with cobbler artisans has collaborated to produce fashion products. Shashikant Dhotre, who is known for his realistic portrait, works but for three years has been experimenting sculptural installations and expressing his own rooted experiences of his struggle. 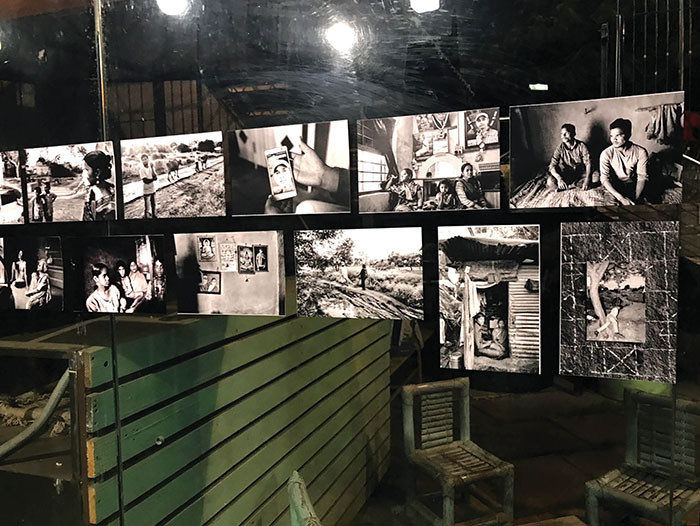 Clark House Initiative is a curatorial collaborative and a union of artists based in Bombay. It was established in 2010 by Zasha Colah and Sumesh Sharma, concerned with ideas of freedom; Zero Eight 21 mainly focuses on archiving the heritage through the artistic documentation using mediums such as photography, film-making, painting etc.