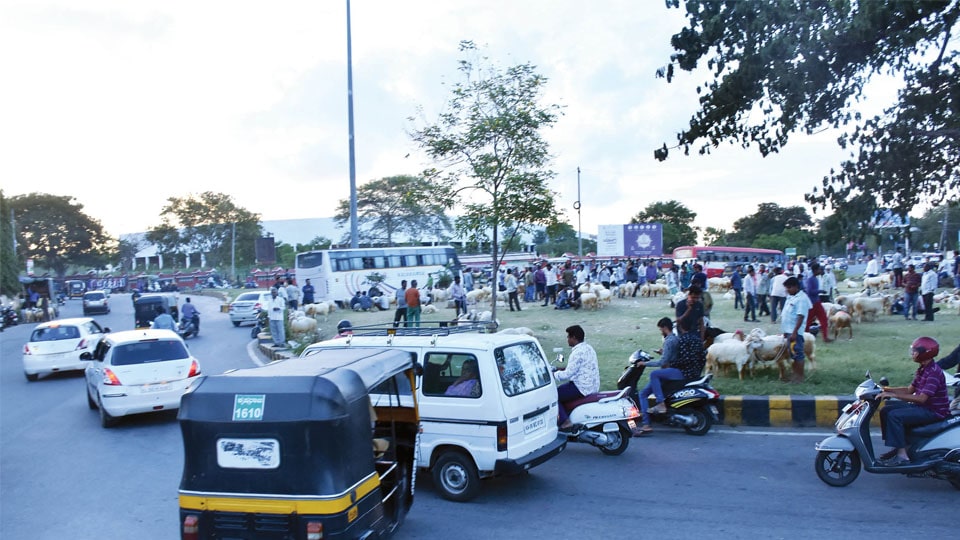 It is that time of the year and the season of festivity begins with Bakrid which will be most likely celebrated on Aug. 11 or 12. Bakrid or Eid al-Adha, an Islamic festival, is known as the ‘Festival of the Sacrifice’ which honours the willingness of Ibrahim to sacrifice his son as an act of obedience to God’s command.

But prior to the sacrifice of his son, the Almighty God provided a lamb to be sacrificed instead. In commemoration of this, an animal (sheep) is sacrificed and the meat is divided into three portions: While one portion is given to the poor and needy, the second portion is for the home and the third portion is distributed among relatives. With the festival dates nearing, Mysuru has begun its preparations.

Drive along the road next to Bannimantap Grounds near the LIC Circle or Millennium Circle and you will not miss flocks of sheep grazing on the green patches on the road edges, circles, etc. and you will never miss the strange and pungent smell of sheep wool combined with other smell of surroundings including sheep shit and pee. Amidst all this, people come here to admire the beauty of sheep, its healthiness and sturdy structure. They negotiate prices to strike a deal with traders who come from far-flung villages with their sheep.

The LIC Circle turns a ‘Sheep Hub’ where sheep of different varieties are sold and people buy the best and healthy animals according to their buying capacity. They take the sacred animal to their homes, feed them well and sacrifice the animal on the day of Bakrid.

Syed Shah, who had come along with his friends to buy a sheep, speaking to Star of Mysore, said, “We are extremely happy to be celebrating Eid. The seller quoted Rs. 25,000 for a sheep and we managed to strike a deal for Rs.17,000. We were lucky to get it at this price because the seller was keen to sell it today itself. The prices are very high especially during this time because of the demand. We came here at around 4 pm and after hours of negotiating we managed to get this one. The prices are steep when compared to 2018 and there is a rise of Rs. 5,000. And with every passing day, the prices are sure to skyrocket.”

Zeeshan, a seller from Kirugavalu at Bannur said, “I have been coming here to sell my sheep. I have been in this business and we raise sheep especially for Bakrid so that we make some money. The cost of each sheep is Rs. 30,000 and prices depend on the breed and also its health condition. The famed Bannur sheep is in great demand especially because of their fat content, looks, healthy body and a unique taste. The market economics is such that this variety of sheep fetches a good sum during this period.”

Another enthusiastic sheep seller Junaid Pasha, who, with his broad smile and witty communication skills, managed to get the attention of customers said, “I and my friends have been coming here since the last 10 days. This is the main centre for sheep trade during Bakrid. Sellers come from far off villages with their sheep and price negotiation is the key. It all depends on the beauty of the animal, its distinct features, skin smoothness and also size and power.”

Nadeem was the centre of attraction and all the customers queued up to have a look at his sheep as he had the best animals in the entire market. He had a couple of huge and healthy sheep that were priced at Rs.75,000 a pair. He said, “We get sheep from Kirugavalu, Bannur, KRS and Malavalli. All animals should be compulsorily older than one year and only then they are eligible to be sold. The pair which I have is well built and if someone wants to buy one sheep from this pair then they will have to pay Rs. 40,000.” Chandra, a school boy from Pandavapura, said, “I have been coming here in the evenings. My sheep are from Amingad and a pair costs Rs.50,000.”

Syed Karim Baba, famously known as ‘Boti Baba’ in Mysuru because of his mutton shop in Rajiv Nagar, has made good business during the last 15 days. He said, “I got sheep from various villages. Out of the huge flock that I have here, two of them have been raised by me. Animals must be healthy and people do not buy them if they have scars or injuries as it is for a scared purpose. Till now I have sold 15 sheep and the demand will increase as Bakrid draws close and as dates near, the sale will begin at the crack of dawn and will continue beyond midnight.”

Javed and Moin Pasha, who were pacing up and down and enquiring rates with various sellers, were keen to find the sheep of their choice. They said, “All of us come here to buy the best sheep and year after year, it has become a common sight during festival. The rates have increased drastically this year. For a sheep that weighs 18 kg, the cost is around Rs. 32,000 to Rs. 40,000 depending on its features, health and breed.”

3 COMMENTS ON THIS POST To “Welcome to Sheep City”