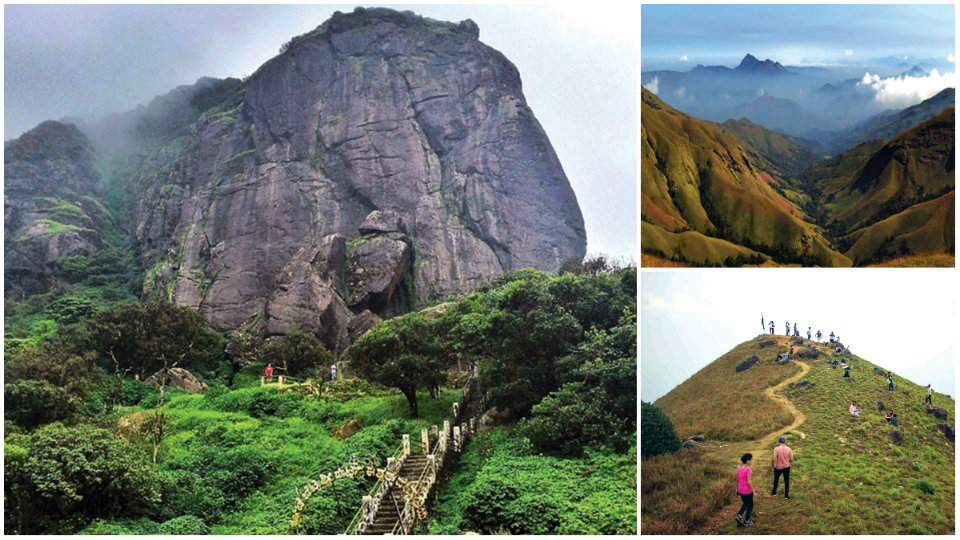 Trekking has become a popular trend and a picnic-sort of an activity these days. Mysuru and surrounding areas, which have several picnic spots and beautiful nature nearby, is something that needs to be explored. This Weekend Star Supplement focuses on some of the favourite trekking spots in and around Mysuru and also introduces readers to ‘Tarzan of Nagalapuram’ Radhakrishna Murthy, who has done over 75 treks so far.

With 9 to 5 kind of jobs on the rise, many youngsters turn towards seeking adventure to move away from the busy city life and venture into the roads less travelled. While work will fill the belly, adventure will fill one’s souls. Weekend trekking plans – after a hectic week at work – is something that will help one set his/ her mind off the humdrum of life and breathe a whiff of fresh air.

Trekking guides, trekking event planners, solo travellers or solo trekkers have been on the rise to experience the trek as well as the majestic view from summits. Many individuals, who are still caught in the cobweb of life where they grind their energy and time and invest it to earn their livelihood, can sometimes take a break or two and venture out in the nature and be a part of such treks.

There are several adventure clubs and environment enthusiasts in Mysuru that conduct treks and activities over the year.  People’s Tree is a group that creates Awareness on environment and teaches importance of living life beside nature, away from mobiles and gadgets. Trekking has become a popular trend and a picnic-sort of an activity. Mysuru and surrounding areas, which has several picnic spots and beautiful nature nearby, is something that needs to be explored.

Speaking to Star of Mysore, Shivashankar, who runs People’s Tree, says, “We generally go to treks in the Western Ghats of Karnataka and Kerala, Eastern Ghats of Tamil Nadu and Andhra Pradesh. We want to teach students about the environment and how to keep it clean and enjoy nature.”

SPAN Adventure Club which completes 25th year this 2018, organises treks to Himalayan camps, Uttarakhand, Everest Base camps especially for students falling in the age group of 10-17 years and train them about life skills and survival instincts.

Shankara Subramanya of IAMAS says that his organisation has been conducting trekking and escapades in Mysuru since the last 15 years. “We specialise in rock climbing expeditions and every year we conduct over 10 to 12 treks,” he says and adds that IAMAS conducts many trekking programmes for physically challenged and tribal children.

Thadiyandamol is one of the most famous trekking places situated in the dense tropical rain forests of Western Ghats and Shola forests in the Kodagu district. Trek enthusiasts and nature lovers ensure that they trek at least once during a year to this scenic abode which is situated at an altitude of 5,735 feet above sea level. This is the third highest peak in Karnataka after Mullayanagiri and Kuduremukha. 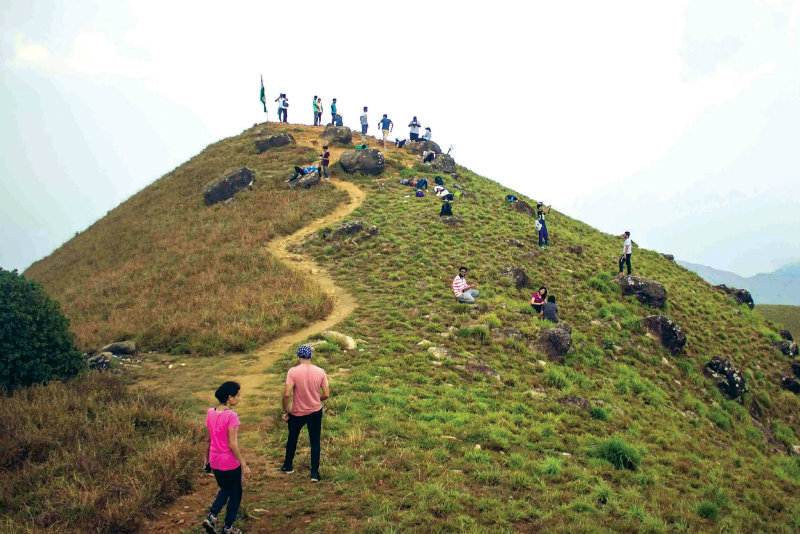 This trek is moderately difficult and even amateur trekkers will enjoy the journey up to the top and back. The distance of trekking is about 16 kilometres.  At the foothill is a historical landmark — The Nalaknadu Palace, which was built in 1792 by Dooda Veerarajendra and Padi Igguthappa Temple of Kodavas.

There are roads that lead you to the trekking trail of the Thadiyandamol Hill.  Trekkers will see a waterfall and several streams along the course of the trek. The hill has a rich biodiversity of flora and butterflies and insects. Lush green grasslands and horizons in the sky give a euphoric touch to the trek. Food stalls are placed near the base camp (Kakkabe) and near a big rock (during the course of the trek where people usually pitch tents or stand on it to get a view of the beautiful hill).

Being a one-day trek, many working class people visit this place during holidays and weekends. This trek can be done all round the year but one needs to be prepared during monsoon as it will have gusty and cold winds and leeches all over. Trekkers should also be careful while camping as there will be movements of elephants in the forest. This is definitely a must visit trek spots as it will give you an idea of adventure, nature, biodiversity and will motivate you to conquer harder treks in the future. If you are not in a group then public transport will be economical. Entry fee should be paid to Forest Department. Night stay is prohibited at the summit. 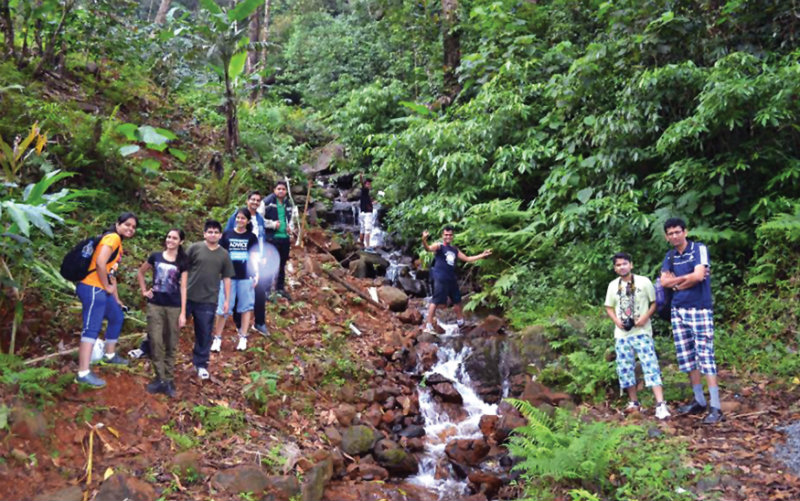 Thadiyandamol is about 130 kilometres from Mysuru. The best way to reach Kodagu is to catch a bus from Mysuru, which will take about three hours. Bike enthusiast can drive from Mysuru too. An evening bus journey will be ideal so that you crash in one of the home stays there. An early morning drive to the foothill to start the trek will ensure that you get good glimpse of the sunrise and the melodious early songs of birds.

Nishani Motte, Sannapulikotu, is a wildlife circuit trek which falls under the tranquillity of Talacauvery Wildlife Sanctuary of Kodagu District. Nishani Betta is a relatively unknown peak near Galibeedu which is 12 kms from Madikeri. This trek is through the wild jungles and needs to be accompanied by Forest officials or recognized guides. They will marshal the troop through the thick forest and will know the pattern of animal movements along the course. Prior to the trek, permission needs to be taken from the Talacauvery Wildlife Sanctuary which houses many wild species and has varieties of trees. 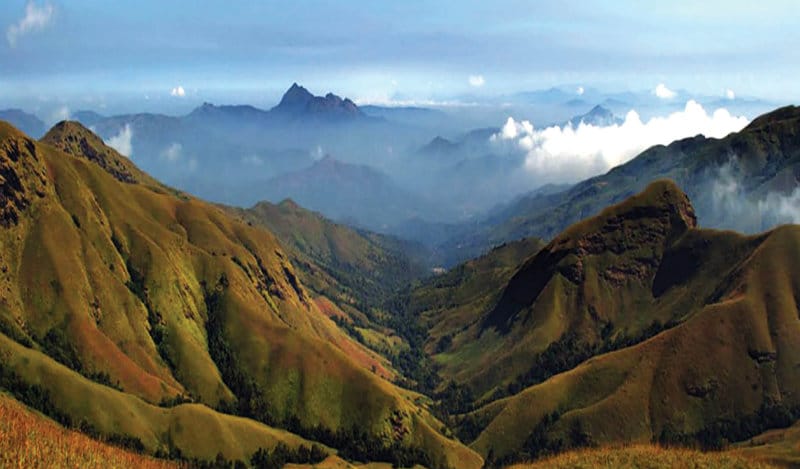 So the trek needs to be planned well in advance. The trek is about 16 to 18 kilometres along the stretch of Brahmagiri ranges. It is better to stay overnight at a home stay amidst the coffee plantation and head for the trek in the early hours.

The trail has several long trees and vegetation and the summit is at an altitude of 4,100 feet. The rain forest is filled with damp soil, leeches, and insects making it a challenging and worthy experience for a lifetime. Fresh elephant dung can be seen at places and scattered bamboos is an indication that the elephant herd passed by. And if you are destined, you will be able to witness the wild beasts.

The trek can also be started from Talacauvery which is about 10 kilometres from Bhagamandala. The trek starts with a jeep ride, where only official Forest Department jeeps can run. The jeep ride will go past a forest watch tower and then within a couple of minutes the forest trail will begin.

As the tip of the peak is in the shape of an egg, the peak is known as Nishani Motte (Motte meaning egg in Kannada). The trek difficulty level is moderate but the misty trek uphill will be a sight that one would cherish. The summit view has several hill caps and lands covered with mist. Experience wilderness in its rawest form in this trek. 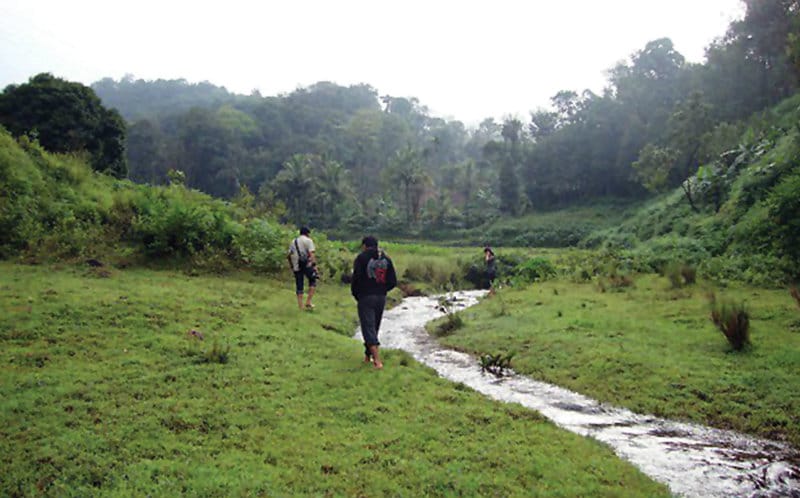 From Mysuru, catch a bus to Bhagamandala which will take about 4 hours (around 150 kms); obtain trek permits from the Forest office at Bhagamandala. From there, hire a jeep and reach the base camp (Talacauvery) of the trek.

With just about 30 kilometres away from Mysuru, Kunti Betta is the nearest trekking spot that Mysureans can afford to go to find an escape route from their mundane mechanical city life. Kunti Betta is a scenic hill situated in Pandavapura Taluk of Mandya District. 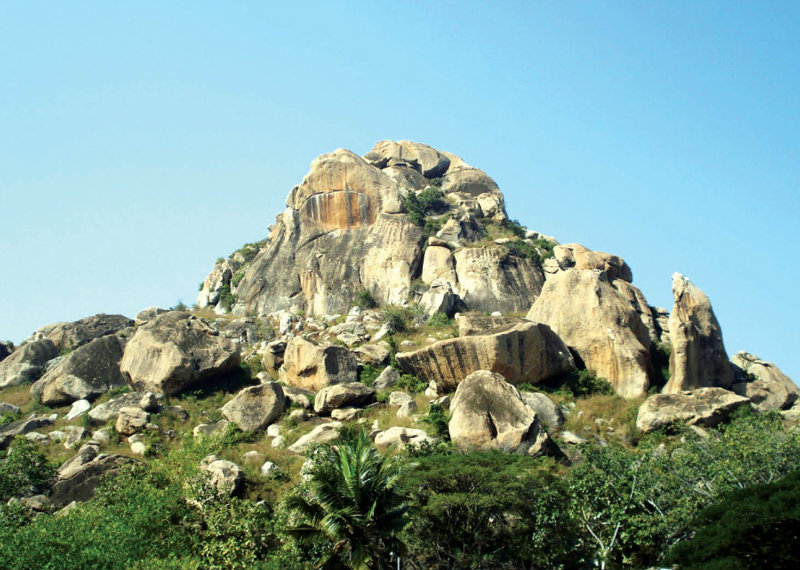 The difficulty level of this trek is very easy. The altitude is about 2,800 feet and the trekking distance is about 7 kilometres. This trek is a rock terrain having inclinations and pathways. Backpackers will love this short trek and night trekking gives an overall different experience with stars above the heads and a nature to admire by.

Kunti Betta is formed by two rocky hills that are surrounded by paddy and sugarcane fields. Between the two hills, a temple and a pond are situated. Many adventure enthusiasts come here to do rock climbing and rappelling too. Locals believe the Pandavas and Kunti lived in this area during their exile. Thonnur Lake is about 4 to 5 kilometres away from the base camp. Catch a bus from Mysuru and reach Srirangapatna and then board a local transport to Pandavapura. From there hire an auto and reach the base of Kunti Betta. If you are catching a train, get down at the Pandavapura station. On the other hand, if you love bike rides, an early morning ride from Mysuru will add more zeal to your adventurous day. Long ride, followed by a short trek!

Ramanagaram is one of the famous trekking places near Bengaluru. It is also referred to as Ramadevara Betta. The elevation of the hills is about 3,000 feet and it includes rock climbing too. It is a rugged trek, filled with paths of rocks and boulders which call for a different kind of adventurous experience.

More than half of the trek involves climbing steps carved in the rocks. After climbing about 400 steps, one would reach the temple. A diversion near the left side of the temple, leads you to the peak of the hill from where you get to see the panoramic view. It is in these hills, that the Classic Bollywood Movie ‘Sholay’ was shot. The difficulty level of the trek is moderate. This hill also is a habitat for many rare species of birds like the

Long-Billed Vulture and Yellow-Throated Bulbul and will be a treat for any bird lover. Overnight camping, chimney climbing and rappelling activities are also done here.

Ramanagaram is about 95 kilometres from Mysuru. One can catch a train or a bus from Mysuru and reach Ramanagaram. From there they can hire an auto or a cab and reach the hill which will take about 5 to 10 minutes.

Kodagu, generally known as the Scotland of India, is an adventurer’s paradise. The Kotte Betta is also situated in Kodagu at Hattihole. The altitude of the peak is about 5,400 feet. The name Kotte refers to Fort. The trail has several coffee farms along its path and small houses and cottages. Several birdwatchers come here to identify and look at the species of birds that this hill houses. 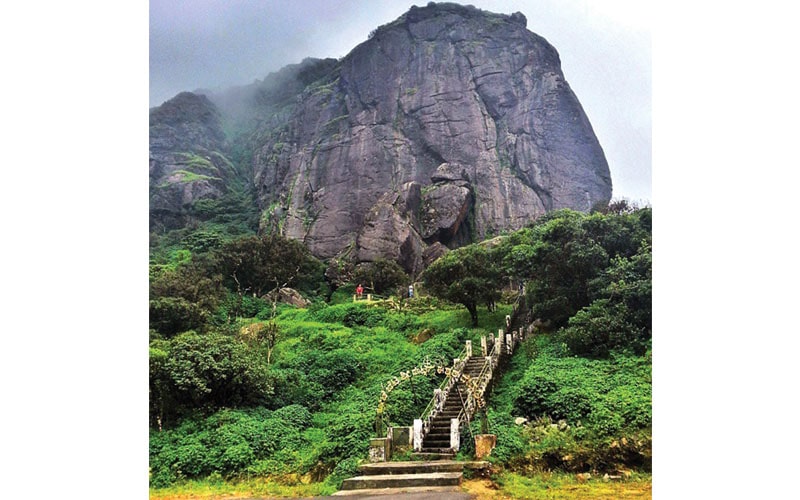 Once you are on the top, you can see the miniature Somwarpet and Harangi Dam. Elephant herds often pass through the trail. Deer, Sambars, Gaurs and Wild Dogs can also be spotted in the forest. The difficulty level is moderate and it is advisable to have a trekking guide along with you. The trek is 14 kilometres and people often tend to lose their way. 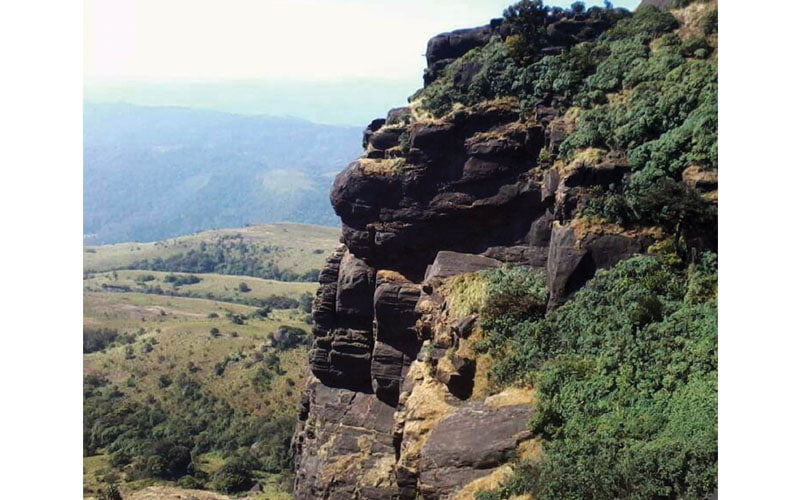