After a devastating drought for two years, Bandipur National Park is now springing back to life with lush greenery, thanks to copious rains and effective measures taken by the Forest Department. The park is opening its arms to welcome tourists flocking the forest area, spread across 1,027 sq kms, to enjoy the tranquil atmosphere.

This Weekend Star Supplement takes our readers on a journey inside the Tiger Reserve which is home for around 150 Tigers, a host of other animal and plant species. 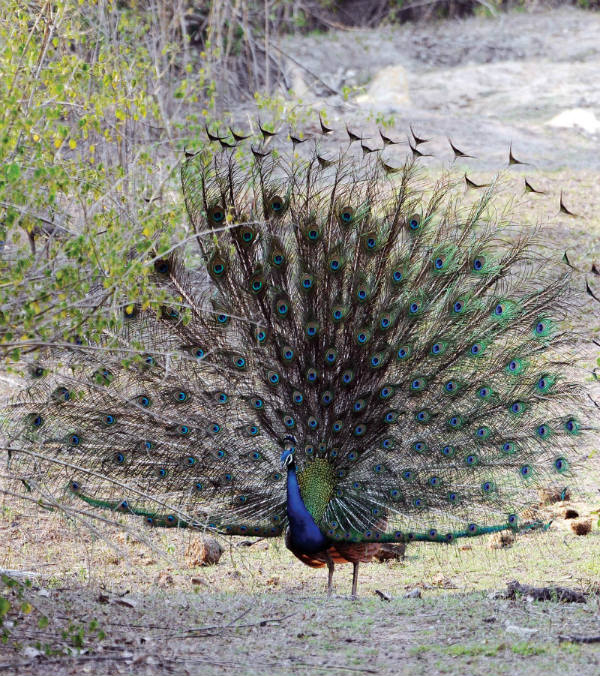 A peacock in all its splendour.

The barren land, water holes going dry, trees shedding leaves, denizens in search of water and food and staring at a bleak future were a common sight at the Bandipur National Park since the last two years. The rain gods had shied away and drought had set in at this National Park that always attracts hordes of tourists.

However, the recent rainfall during April has rejuvenated the forest and the animal kingdom. Elephants and other herbivores, which fed on dry leaves and branches, are now feeding on greens and there is a spring in their steps. As the sun sets, the sounds made by wild animals and the chirping of birds are pleasant to hear. In fact, the sight of deer herd taking rest right in front of the guest rooms is one thing that people do not want to miss early in the morning. 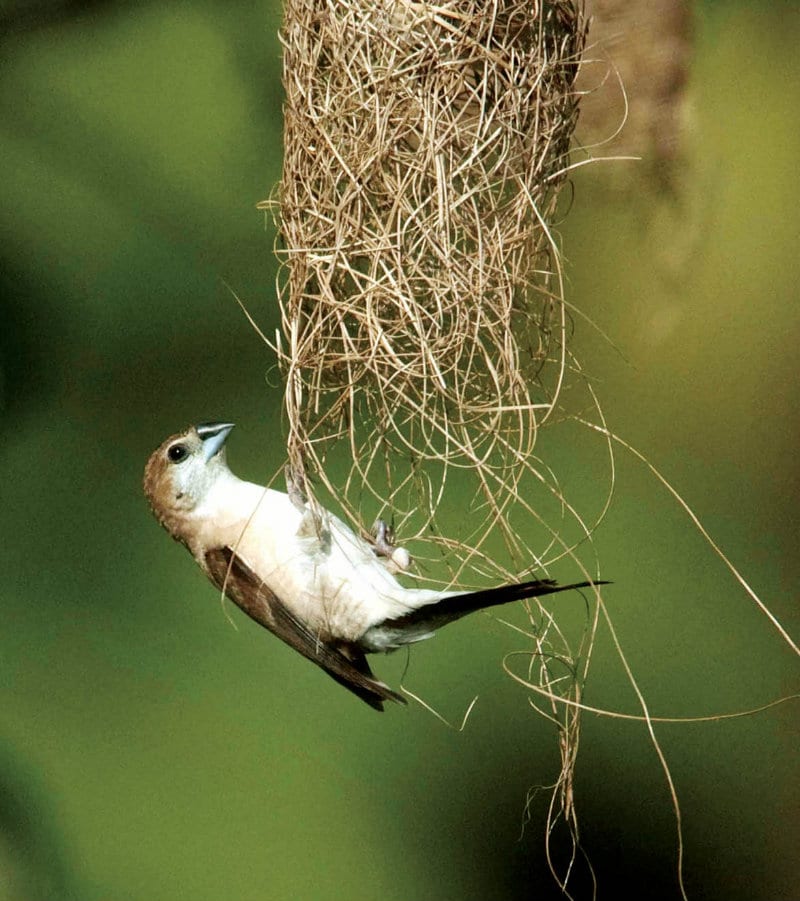 An Indian Silverbill bird at its nest.

Established in the year 1974, the Bandipur Tiger Reserve under the Project Tiger initiative, is located around 80 kms from Mysuru. People travelling towards Ooty do not miss the chance to enjoy the safari, which is organised by the Forest Department on a daily basis.

The Bandipur National Park is spread across 1,02,700 hectres (1, 027 sq kms) out of which 872.24  sq kms have been identified as core area where all activities have been banned. But the forest department conducts safari in selected areas. Bandipur Forest area covers a total of 13 ranges which includes three ranges in Bandipur, four ranges in Gundlupet and six ranges in Hediyala. It is also a home for many endangered wildlife and also provides refuge to other threatened and vulnerable flora and fauna species. 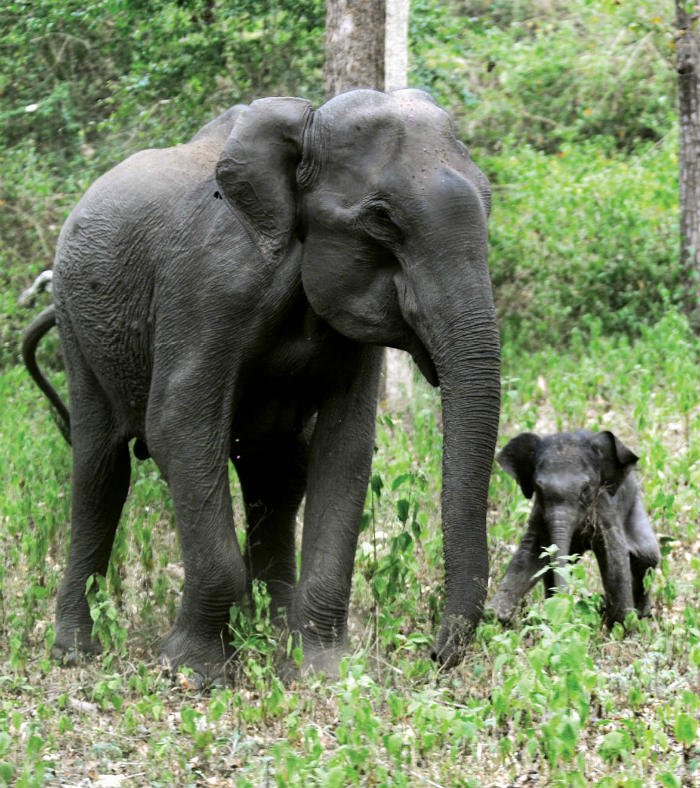 An elephant guiding its calf to take baby steps.

It also supports a wide range of plants and tree species including teak, rosewood, sandalwood, Indian-laurel, Indian kino tree, giant clumping bamboo, clumping bamboo and others. There are a number of flowering and fruiting tree species like kadam, Indian gooseberry, crape-myrtle, axlewood, black myrobalan, flame of the forest, golden shower tree  and others. 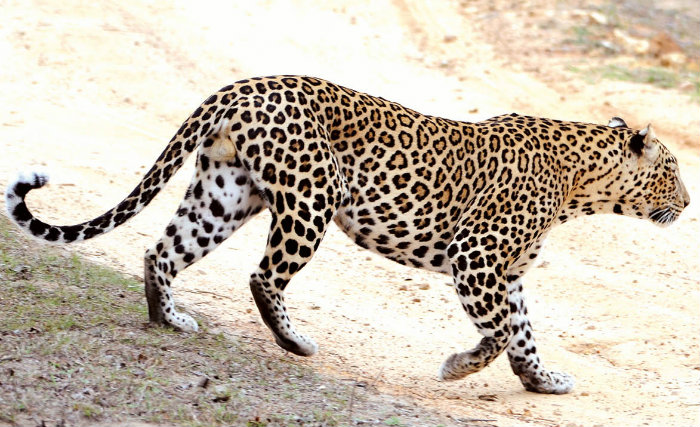 A leopard scouts for a meal.

Among most commonly found birds in Bandipur are peafowl, grey jungle fowl and crows. It is believed that the National forest is home for over 200 species of birds such as honey buzzards, red-headed vultures, Indian vultures, flowerpeckers, hoopoes, Indian rollers, brown fish owls, crested serpent eagles, changeable hawk-eagles, bee-eaters and others.

The last couple of years have been tough for the wild animals and birds which suffered severely due to drought. Among the 373 lakes in the national park, 350 lakes had completely gone dry owing to 62 per cent deficiency in rainfall.  Forest Department had to install solar-powered bore wells to rejuvenate 12 lakes and provide drinking water to animals.

However, most of the lakes are now filled with sufficient water owing to heavy rainfall for the past 15-20 days.

The death of Prince, the most photographed Tiger in Bandipur Tiger Reserve came as a shock to wildlife enthusiasts. The carcass of the tiger was found two-days after its death near Lokkere in Kundakere zone.

Bandipur houses about 150 tigers in its 13 zones covering 1,200 sq. kilometres and Prince was spotted during safaris since 11 years thus becoming the favourite to all. 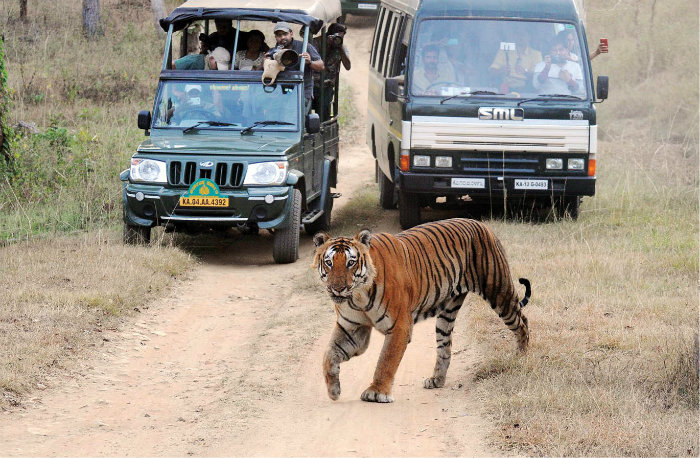 When the ‘Prince’ walked in its corridors at Bandipur.

Though the lifespan of tigers in the wild is said to be 10 years, Prince lived for 14 years and had established its territory spanning about 45 kilometres. It has killed four tigers in territorial fights and had recovered from serious injuries. Though the tiger had died owing to natural causes (as claimed by the forest department), its snout had been chopped off by miscreants for its canines.

Investigating the case, the forest sleuths arrested Soma, Bomma, and Pinniswamy, residents of Cheluvarayanapura, a village adjoining Bandipur Forest Area. According to Department sources, both Soma and Bomma grazed cows at Kundkere Forest Range and on Mar. 31, they found the carcass.

Later, the duo cut its snout and took away four of its canines and the lower bones to make some quick money. The Forest sleuths, who conducted the raids on May 11, recovered the two canines. 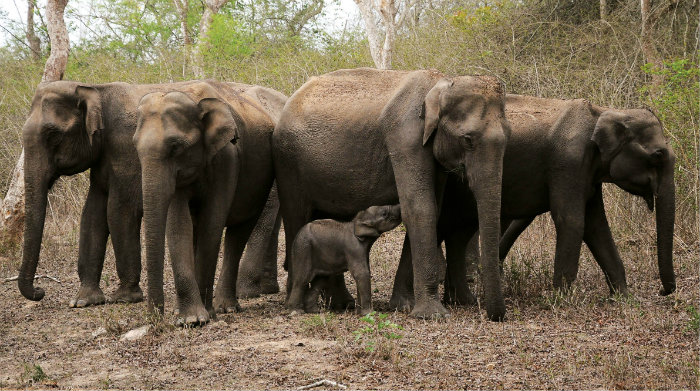 An elephant herd guards a newborn from predators.

Later, the duo was produced before a Court and remanded to judicial custody.

As far as tiger population is concerned, the department had recorded a total of 135 tigers during 2015 census, 142 during 2016 census and the population is expected to be more this year. 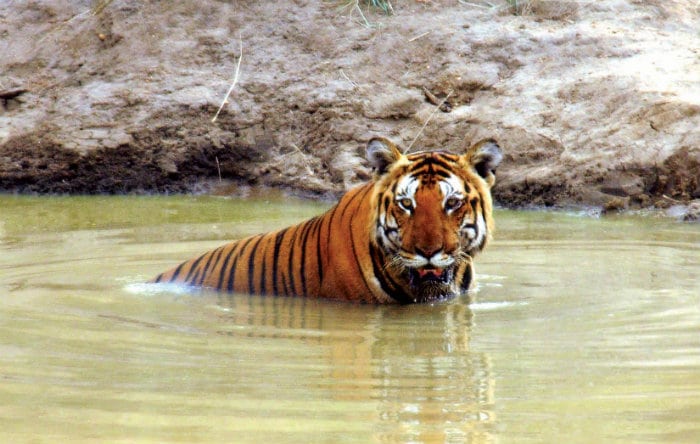 Tiger named ‘Madesha’ cools itself at one of the water holes.

The department has taken around 8,000 photographs of tigers using 399 dual cameras at different locations. These photographs will be compared and thoroughly checked before coming out with the exact figures this year, said T. Heeralal, Conservator of Forests and Director, Project Tiger, speaking to Star of Mysore.

The death of Prince has actually helped forest officials to sight more tigers. Prince, which never tolerated other tigers entering into its territory has fought with many tigers and killed a few also. Now with Prince dead, other tigers are able to roam freely along with their cubs. Officials have sighted tigers at Gudde Kolachi, Aane Katte, Moorkere, Wesley Circle – the main safari area.

The Bandipur National Park is surrounded by around 200 villages along its periphery. Villagers often enter the forest to  graze their cattle and collect firewood. There have been many incidents of wild animals entering human settlements in search of food. 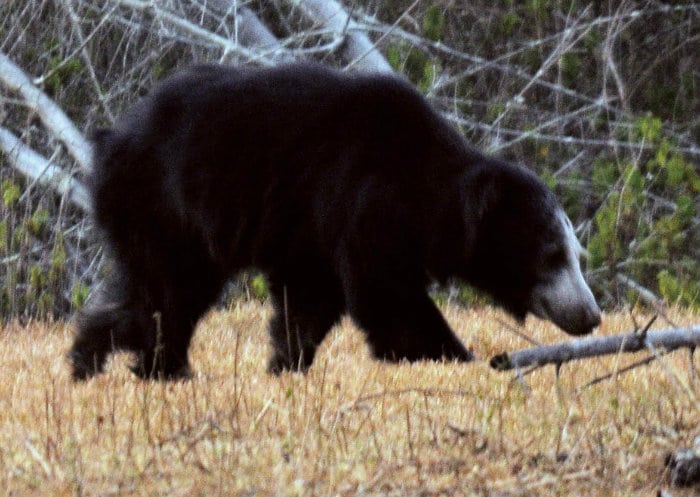 A sloth bear hunts for honey.

In order to prevent elephants entering human settlements, the Forest Department fenced the forest border at a cost of Rs. 1 crore for every kilometre. Till date, the department has fenced around 17 kms and plans to take up the works for another 21 kms in the near future.

This apart, the department also deals with forest fire, which is rampant during summer. This year, the forest officials constructed fireline and viewline in an effort to prevent fire from spreading.

Forest officials said that a few miscreants were involved in setting the forest on fire and added that this year they had to deal with 17 such incidents recorded in Kalkere, N. Begur and Gopalswamy Hill Forest ranges. They also mentioned that miscreants would be brought to book at the earliest as they had information about the culprits. Sadly, a forest guard succumbed to injuries in the Kalkere forest range fighting the inferno. 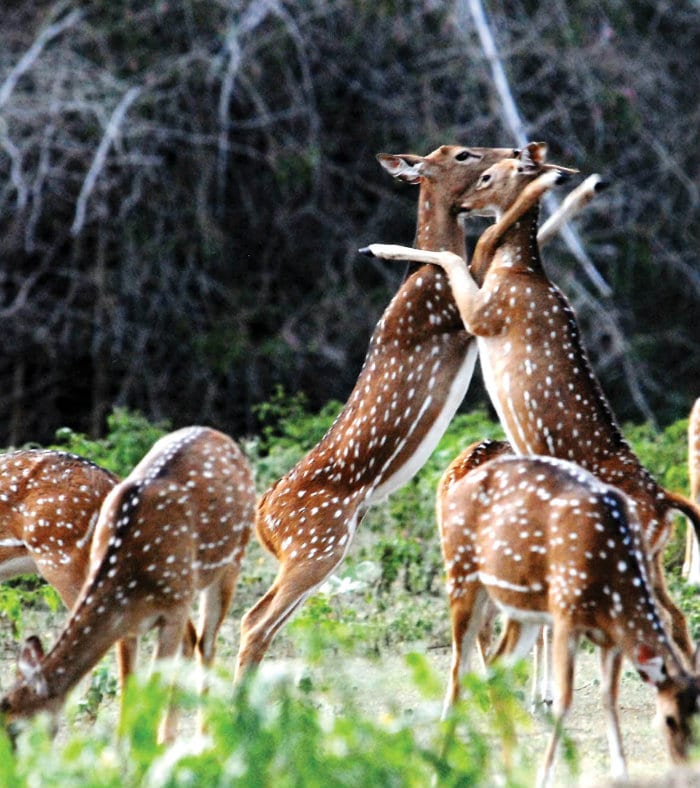 Spotted deer: Who is strong?

Places to stay and visit near Bandipur

There are a total of 19 rooms including three dormitories available for tourists to stay on prior reservations. Currently, tourists are taken on safaris twice a day from 6.30 am to 8 am and 3 pm to 5 pm.  There are several resorts surrounding Bandipur including Windflower Resorts and Spa, Jungle Lodges and Resorts and others.

This photograph, which shows a Tigress quenching her thirst with two cubs, was clicked by a Bengaluru-based Wildlife enthusiast Manjunath Hegde during his visit to Basavana Katte in Bandipur recently.