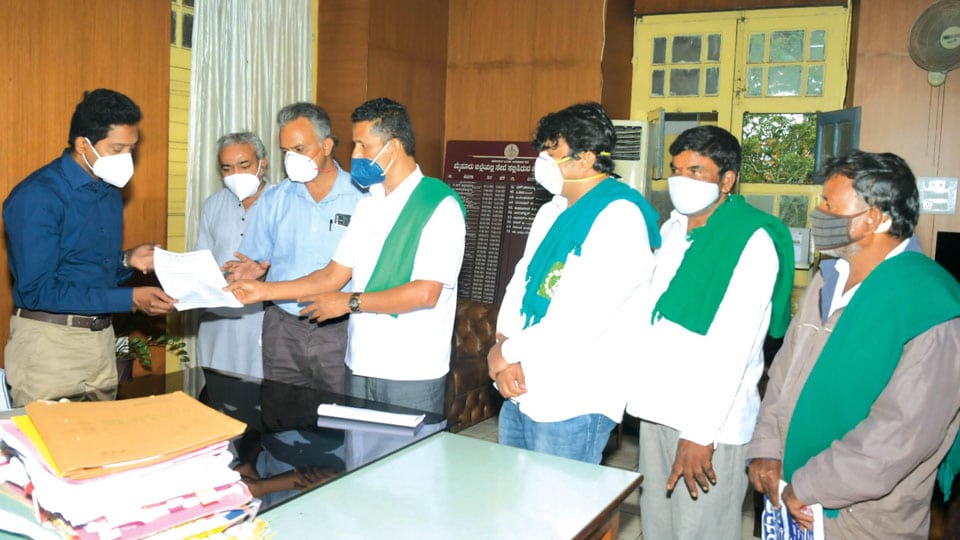 Mysore/Mysuru: Accusing a couple of private enterprises at Kochanahalli in the taluk of cheating farmers who had parted with their land, a delegation of  farmer leaders and Trade Union leaders submitted memorandums to Deputy Commissioner Dr. Bagadi Gautham at the DC’s office here yesterday, seeking appropriate compensation and reinstatement of sacked employees of a Nanjangud Industrial Unit.

Maintaining that these enterprises had purchased 400 acres of land from over 200 farmers of Kochanahalli for the construction of a Golf course, by paying a compensation of Rs. 1.25 lakh per acre and also assuring job to one of the family members, the leaders alleged that after dropping Golf course plans citing infeasibility, the partners of the enterprises were selling the same land to KIADB at a whopping Rs. 47.5 lakh per acre.

Urging the Government to ensure that the enterprises which had purchased the land pay appropriate compensation to farmers or else return the land to the original owners, they demanded action against those who had made false promises to farmers.

Alleging that a major private company in Nanjangud had sacked 72 employees for silly reasons, the leaders demanded that the sacked employees be reinstated at the earliest.

Contending that the families of the sacked employees are on an indefinite strike for the past three-and-a-half months, they urged the authorities to render justice to them.