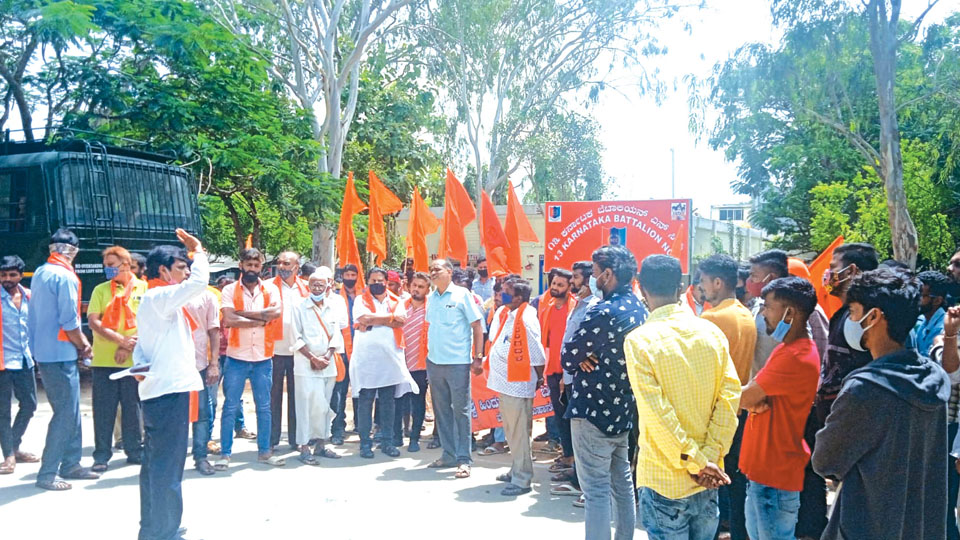 Mysore/Mysuru: Accusing the District administration of targeting only temples during the drives for demolishing places of worship built illegally at public places, activists of Vishwa Hindu Parishad (VHP) staged a demonstration in front of the Deputy Commissioner’s office here yesterday.

Contending that the Supreme Court in its order has clearly said that the demolition should be done only if absolutely necessary, the protestors maintained that the authorities should take  clear note of this before carrying out the demolition.

Arguing that there should be no discriminatory practices in the execution of the SC order, they pointed out that the SC has also clarified that the authorities can also  consider regularisation of places of worship wherever possible and to shift them elsewhere if it is not possible to do so. But the district administration without bothering to take elected representatives and devotees into  confidence, was carrying out the drive all of a sudden and razing temples.

Reiterating that the authorities must follow the SC directions that demolition must be taken up only after giving an opportunity for relocation of temples which impeded public and traffic movement, the VHP activists claimed that the authorities have ignored this point.

They urged the district administration to properly understand the SC order and take measures on a priority for regularisation of temples.

Contending that repeated appeals have been made to the Government in this regard, they warned of intensifying the protest if targeted demolition is not stopped immediately.