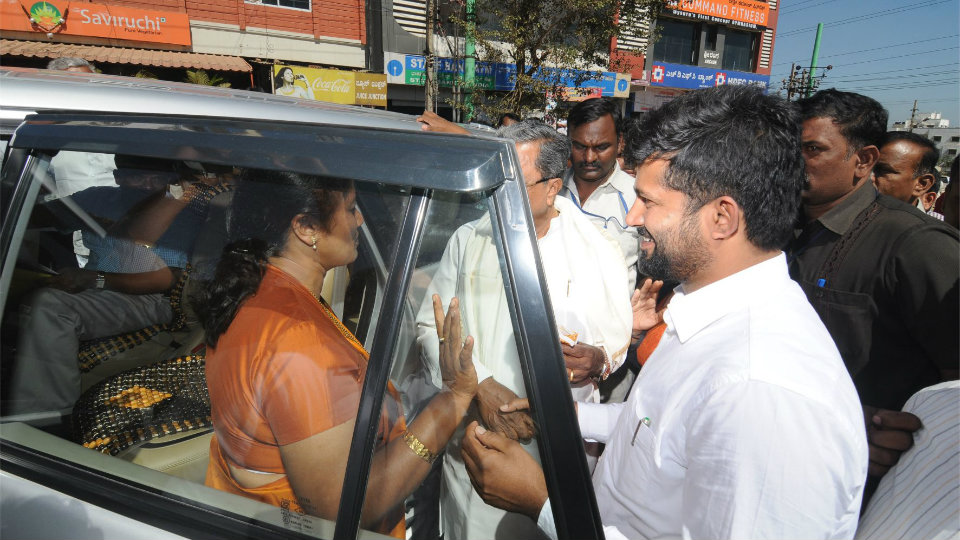 Mysuru: CM Siddharamaiah in a lighter vein compared the beard grown by MP Pratap Simha to that grown by Indian Cricket captain Virat Kohli this morning. This banter occurred during the inauguration of a road in Gokulam III Stage, named after former MLA late P.M. Chikkaboraiah, who was the Hon. President of Vidyavardhaka Sangha.

The CM turned to Pratap Simha who was by his side and in his characteristic gruff voice told the MP, “What is this, you have grown a nice thick beard like the one grown by Virat Kohli (Indian Cricket Captain). You are still a growing politician and you need to be careful when you speak.”

Pratap Simha shot back, “First let Manjula Manasa mend her ways and learn to speak. Then let her advise others.”

Earlier, when Pratap Simha, MLA Vasu and others were waiting for the CM to arrive, there was the usual exchange of words between the leaders and the journalists.

A few photographers asked Simha as to why he was wearing a black vest when the Police were worried about people showing black flags during CM’s visit.

Simha told the photographers, “You scribes are capable of creating any mischief,” and removed the black jacket and handed it over to his gunman. However, during inauguration of the Diamond Jubilee celebrations of Vidyavardhaka Sangha, Simha asked his gunman to get the coat, which he wore on the dais.

Later, Siddharmaiah unveiled the statue of Founder-Secretary of Vidyavardhaka Sangha K. Puttaswamy at the Vidyavardhaka Engineering College premises and laid the foundation stone for the construction of the college extension building. He also unveiled  the photos of Founder-Members of the Sangha on the occasion.