Home » Voice of The Reader » Festering garbage on Vishwamanava Road 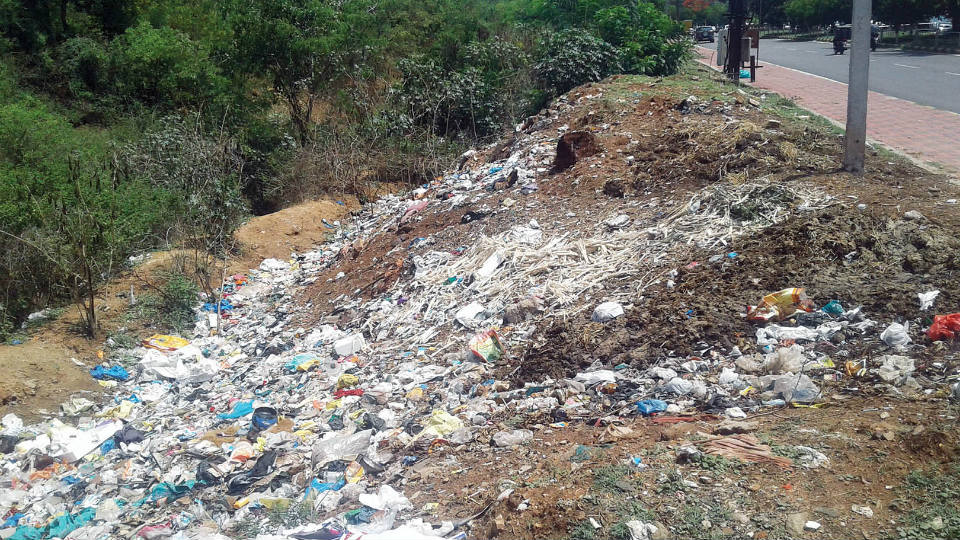 While there was footpath on the eastern side of Vishwamanava Double Road in Saraswathipuram, on the western side there was no footpath as it is adjacent to a channel which serves as a drainage for rain water and other foul waters leading to nearby Kukkarahalli Lake. Since it was not provided with a footpath it served as a convenient dumping ground for garbage as people could easily cross the central verge as it did not have any barricade.

In addition there are two restaurants adjacent to the channel. In recent times it was provided with a footpath and also the central verge was provided with on both sides with 2.5 ft high shiny tubular easily mountable barricade all along to its junction on 5th Cross which is a bus route. It is shocking to observe that garbage has been dumped on the channel slope (see photo) presenting an ugly sight with festering garbage.

As per recent report in SOM, the broken pipe on the northern side conveying sewage water is flowing into the already depleted Kukkarahalli Lake and polluting it. During present season of rainfall there is every danger when water falling on the garbage carries it during its flow into the Lake. This will not only prove deadly to fish-life besides a source of spreading disease.

Will the MCC officials and the engineer concerned immediately inspect and take stern action against whoever is responsible for this menace?