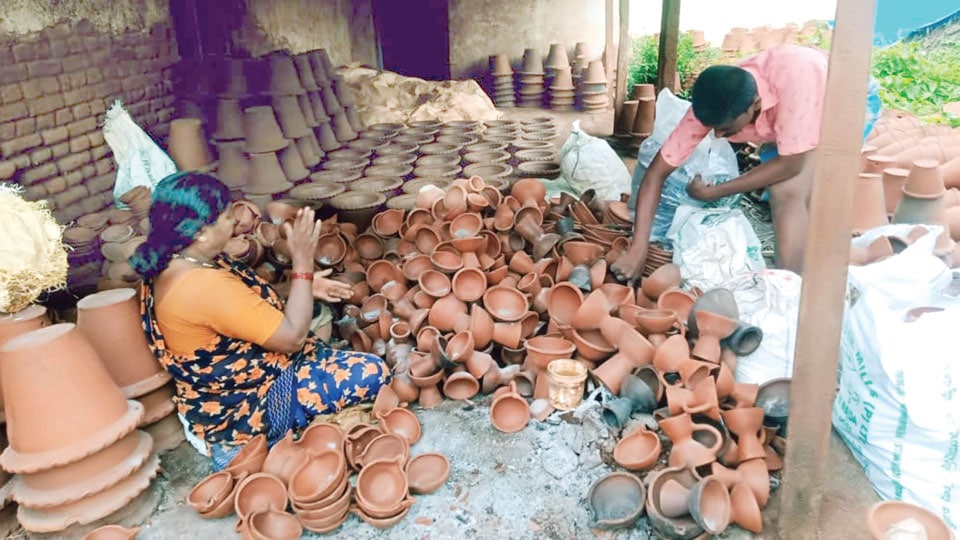 Cheap, colourful and attractive Chinese lights in the market have affected the livelihood and income of clay craftsmen (potters) badly. Potters in and around Mysuru say that for the past several years during Deepavali festival, Chinese lights are more in demand as compared to clay lamps. They say customers are more attracted towards the China-made lamps because they are cheaper and their availability is high.

Until only a few years ago, Doora village, over 20 kilometres from Mysuru, buzzed with activity as several potter families used to be involved in their traditional occupation of making earthen diyas for the festival of lights. Now, there are hardly a few. The village which used to be filled with energy and smell of clay this time of the year is dull as the artisan families opted to make only limited and made-to-order diyas.

The reason behind the popularity of Chinese lights is its cheap cost and wide availability in the market. A clay diya costs anywhere between Rs. 50 and Rs. 100 while the Chinese lights are available for Rs. 30 and naturally there is a tilt, they said.

The demand for colourfully painted moulded lamps has, however, snatched away the livelihood of potters who have been in the profession since decades. The Kumbara community (potters) is now fighting for their existence — neither can they survive with meagre earnings nor can they easily switch to other professions.

However, an encouraging thing here is that the clay diya industry has not entirely been wiped away. There are still some families at Doora who are still carrying on the tradition with elan. And they do it just for the passion of doing so though the sales are limited — equal to a trickle when compared to the earlier years.

Earlier, the potter families used to sell clay diyas for every Deepavali and the numbers would touch 10 lakh to 15 lakh. Now the sales have declined to just two lakhs. It was a profitable business earlier but not now, potters said.

Since the last four to five years, Kumbara families at Doora have come together to form an association called Kumbara Kushala Kaigarika Sangha through which they are supporting each other to make a living out of pottery. Two to four members from each family join together every day and start preparing to make lamps, pots and other clay items.

The Sangha does not produce diyas on a large scale but after making a few customary ones, they make only pre-ordered diyas so that their business does not suffer.

“Gone are the days when the city used to witness the sale of these earthen lamps in every nook and corner. Buyers were usually surrounded by womenfolk who choose the best ones with neat finish and without a crack so that the oil does not seep through. Now designer diyas are flooding the market along with the lamps made of porcelain, brass, bronze and glass. And there are Chinese ones with lights that burn with electricity,” said Revanna, a potter on K.T. Street.

“We 14 families have formed Kumbara Kushala Kaigarika Sangha and of them only eight families are producing clay diyas during Deepavali season. Earlier, we used to produce 10 to 15 lakh diyas and now it has come down to 2 lakh diyas. There is a demand for bigger lamps from Lord Ayyappa devotees. We are somehow pulling on as we also make other clay items like flower vases, tulasi katte, vessels and dhoop containers. During summer, we collect clay from various sources and stock it up so that it will last us for a year.”

The original traditional lamp-making at Doora is a painstaking process. The clay is softened by stomping on clay mounds constantly. Once they are prepared, the lamps are baked to certain degrees inside a specially designed clay kiln. Lamps and pots are baked for 10 hours using dried coconut fronds and are removed from the kiln after three days. Later, they are segregated.

Once they are removed, each lamp is tested by potters by tapping on them to see if they are well-baked and hard. The fully baked lamps and pots are identified based on the sound that comes out of each lamp. A well-baked lamp or pot makes a sound similar to a copper vessel which is not the case of diyas manufactured in factories.

“Chinese lamps have ruined our business. Earlier, we used to get orders for clay lamps three to four months before Deepavali. But now, things are different and we get only minimum orders. Even the prices of inputs like clay, wood and transportation cost have increased four to five times in the last decade. We don’t get good prices and for a small lamp, we get Re. 1 and Rs. 3 while we get Rs. 6 to Rs. 7 for each big-size diya. The same are sold anywhere between Rs. 50 and Rs. 80 in shops,” Revanna added.