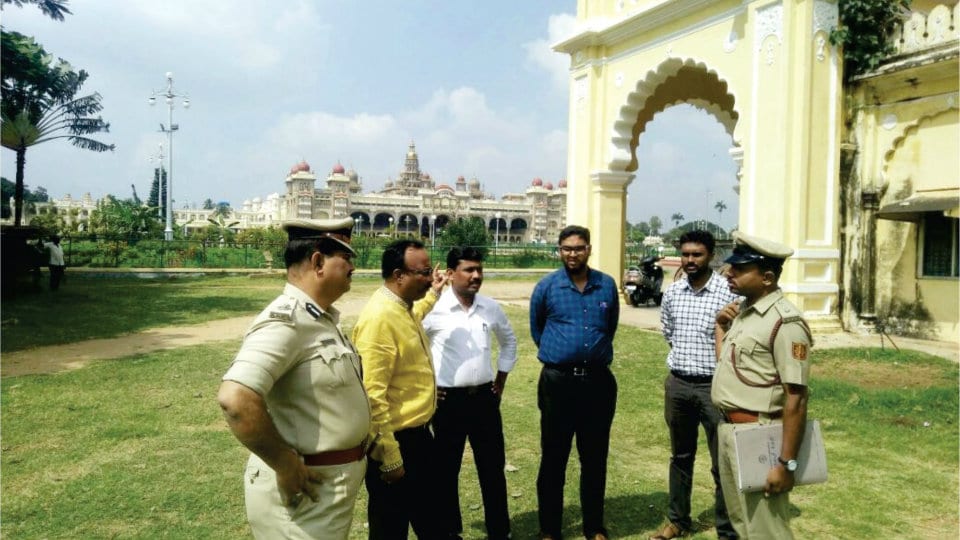 Mysuru: The Mysore Palace will soon have a Fire Station Unit of its own. In recent times, fire mishaps have occurred in different parts of the country and keeping in view the Palace security, the district administration has decided to set up a Fire Station in the Palace.

The officials of the Fire Department visited the Palace on Monday to identify a place to put up the Station. Regional Fire Station Officer Y.A. Kausar along with Palace Board Deputy Director T.S. Subramanya inspected a few spots to identify a suitable place. District Fire Officer K.P. Gururaj and others accompanied them.

A proposal had been sent earlier to the then Deputy Commissioner C. Shikha to start a Fire Station Unit in the Palace. Even the present DC D.Randeep is very enthusiastic in starting a Unit. It is going to start in the next six months.

24-member staff: Arrangements have been made to station fire-fighters 24 hours a day in three shifts to operate the Unit. In all, 24 staff will be utilised for this purpose. A separate water tanker and a fire engine will be provided.

The Fire Station will be started using all modern technology. A separate counter will be opened in the main office of the Palace. A most modern alarm system will be installed which will sense the breaking out of fire or smoke emanating from any building inside. The alarm will go off in the Control Room.

If a separate room is provided in the Palace Board office premises, a new Fire Station can be started at the earliest, said Regional Fire Officer Kausar.

CCTVs out of order

Meanwhile, in the Mysore Palace, where there is the highest footfalls of tourists in the country, most of the CCTVs installed are not functioning. In spite of repeated complaints by the Mysore Palace Board, they have not been fixed.

Nearly 30 CCTVs installed for surveillance and monitoring have been out of order for a long time. This is considered a serious security lapse. The Palace Board authorities have approached KEONICS which had fixed the cameras to fix it. But it has failed to rectify it and the maintenance of the cameras is going to end next month.

According to Palace Board Deputy Director Subramanya, the problem with the CCTVs have been brought to the notice of KEONICS which is managing the cameras since the last few years. There are a total of 113 CCTV cameras installed out of which 83 are functioning and the remaining 30 are out of order.

When this issue was brought to the notice of the DC, he also expressed his displeasure with KEONICS for their negligent attitude of not taking proper action in spite of several complaints.