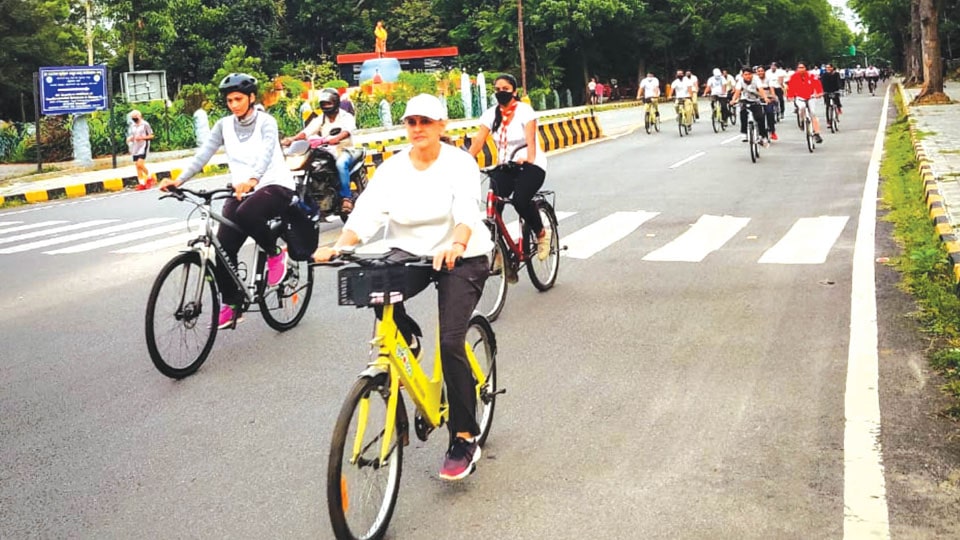 Mysore/Mysuru: Cutting across age and gender barriers, a large contingent of employees and officers of South Western Railway (SWR), Mysuru Division, led by Divisional Railway Manager (DRM) Aparna Garg, took part in the ‘Fit India Freedom Run’ which kicked off on Aug. 19 and will culminate on Oct.2.

On the first day of the campaign, over 120 employees began the run from Chamundi Railway Officers’ Club in Yadavagiri and reached the Railway Sports Ground on KRS Road for a session of stretching exercises.

In the second day’s event ‘Cycling for Stamina,’ as many as 150 employees volunteered to join the cyclothon from Chamundi Club and back via Metropole Circle, Kalamandira, Akashavani and Yadavagiri.

Adequate social distancing was ensured during these events organised pursuant to the guidelines issued by the Ministry of Railways (Railway Board) exhorting the members of the Railway fraternity to stay fit by taking simple steps like walking, running, cycling, etc., that suit their time.

Speaking on the opening day of the programme, DRM Aparna Garg stressed on the importance of making healthy choices and wanted everyone to pursue this with sincerity and passion.  “This shouldn’t be a day’s affair but must be a part of everyone’s life, rain or shine,” she said.

She felt that being fit and healthy will build immunity and could probably offer greater protection against the deadly virus. Healthy citizens are an asset to the nation and as such it should be everyone’s solemn pledge to maintain a healthy lifestyle, she added. Fit India campaign will go a long way in creating mass awareness. More and more people should join in this, she said.