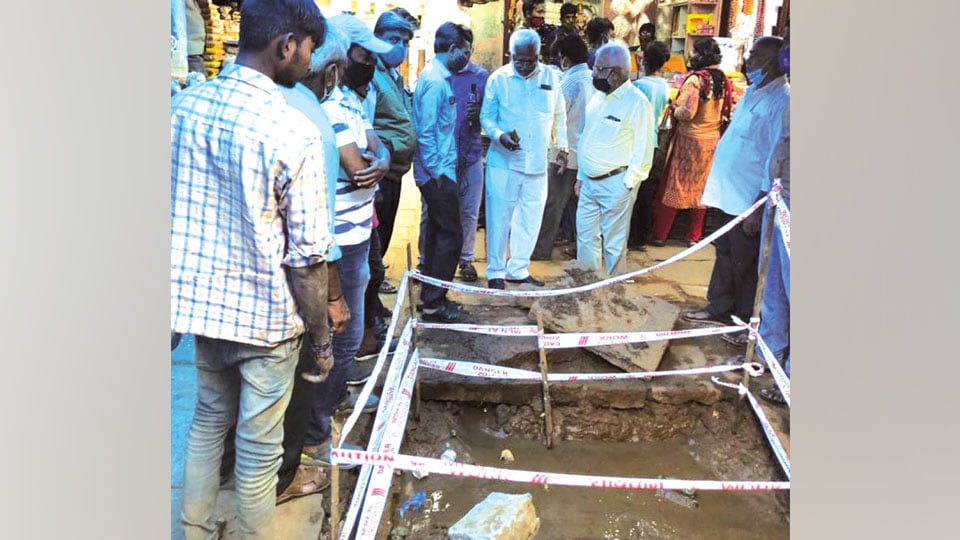 Mysore/Mysuru: Pit digging work inside the century-old Devaraja Market at a time when it is still not decided whether to demolish the structure and construct a new heritage-like structure or to retain the Market in as-is where-is condition has irked the vendors and traders. They have said that the Mysuru City Corporation (MCC) has dug up a part of the Market without any information and this has caused inconvenience to traders and has risked their safety.

The traders at the Market said that the MCC had dug up select places inside the Market a couple of times and have not informed about this to the traders who do business there day in and day out. “Pits were dug at four places earlier and when we questioned, the MCC officials told us that they were testing the soil. The results of the soil test have however, not been conveyed to us,” said Devaraja Market Traders Association President S. Mahadev.

The vendors said that the MCC’s move to dig pits would further weaken the walls and would lead to its collapse. The 4 ft wide 8 ft deep pits have been dug at three to four places near the walls and there is a danger of vendors and shoppers falling into them if they go unnoticed. “Due to rain, the pits were full of water just days before the Ganesha festival and due to our opposition, the pits were closed. It was impossible to move in certain places inside the Market due to open pits,” he added.

Vendors alleged that by digging pits, the MCC is showing an autocratic attitude at a time when the vendors have approached the Court of law against the demolition. “As per the protocol, the MCC should have informed about the digging of pits. Also, there is no information about the soil test conducted after digging the pits. We will write to Deputy Commissioner and MCC Commissioner seeking clarity on the issues,” said Prof. N.S. Rangaraju, who is a Member, Expert Committee for Development and Protection of Mysore Heritage Region and Convenor, INTACH (Indian National Trust for Art and Cultural Heritage).

Clarifying on the issue, MCC Zone 6 Development Officer Manjunath said that as per the directions from the Government,  pits were dug to collect mud for Soil Bearing Capacity. “We have sent the mud sample to National Institute of Engineering (NIE) and the report is awaited soon. Earlier too, the mud was collected and aspects like the density of the mud and underground water level were examined,” he added.