Home » News » Flower vendors not for shifting business to J.K. Grounds during festivals 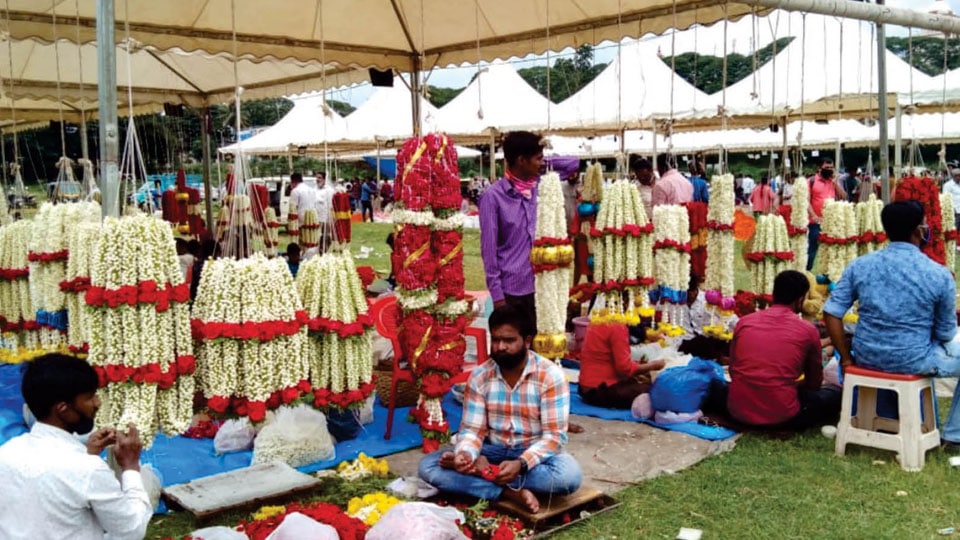 Flower vendors not for shifting business to J.K. Grounds during festivals

President of Tenants Association of Devaraja Market S. Mahadev stated that flower merchants have now decided not to shift their businesses during the next festival season and has urged the District Administration to make proper arrangements in Devaraja Flower Market itself.

“I would advise them to deploy Police personnel and health officials at the Devaraja Flower Market during the next festival season to control the crowd. Based on our experience during the last two festival seasons, we are not ready to shift to the new venue as sales were dull and we have incurred huge losses this time,” he added.

Mysore/Mysuru: Temporary shifting of flower business to the sprawling J.K. Grounds in the city in connection with the recent Gowri-Ganesha festival due to COVID-19 is said to have caused a huge loss to the vendors for want of customers.

The vendors claimed that their hopes of earning a little during the festival were dashed due to lack of footfall to the changed venue.

The vendors had spent from their pockets on creating facilities as the authorities of Mysore City Corporation (MCC) did not do anything except providing the space.

The MCC had shifted the flower market from the century-old Devaraja Market to J.K. Grounds from Aug. 19 to 22 to avoid rush of people during the festival.

A similar arrangement had been made during Varamahalakshmi festival held last month.

The wholesale and retail flower vendors told Star of Mysore that the business was not up to their expectation during the Gowri and Ganesha festival.

N. Manjunath, a retail flower vendor at Devaraja Market, said they suffered loss for the second time in a row. First it was during the Varamahalakshmi festival and now it was during Gowri-Ganesha.

“We had spent money on pandal, lighting and other facilities with hopes of good business. Besides, we had arranged for water tankers for the sake of customers. Contrary to our expectations, the business was not even 50 percent,” he added.

Around Rs. one lakh was spent to put up the pandal for the make-shift shops on the ground for three days. Even they had kept the rate of flowers very low in tune with current situation. But still the business was less than 50 percent. The leftover flowers were disposed as wet waste, said Narendra Kumar, a flower vendor.

Another vendor, Manjunath said all the flower vendors of Devaraja Market have decided not to shift their business to J.K. Grounds in the coming days and the MCC should not put pressure on them in this regard. With no basic facility like toilets who will come to J.K. Grounds to buy flowers, he asked.

Fearing Corona, many residents bought the flowers from their locality or from the mobile vendors. So, naturally the footfall to the J.K. Grounds was less.

Hitherto, people were coming to Devaraja Market — a one stop, during festivals not only to buy flowers but also fruits, vegetables and puja materials. Since the flower market was shifted to the new location, many of them did not turn up.