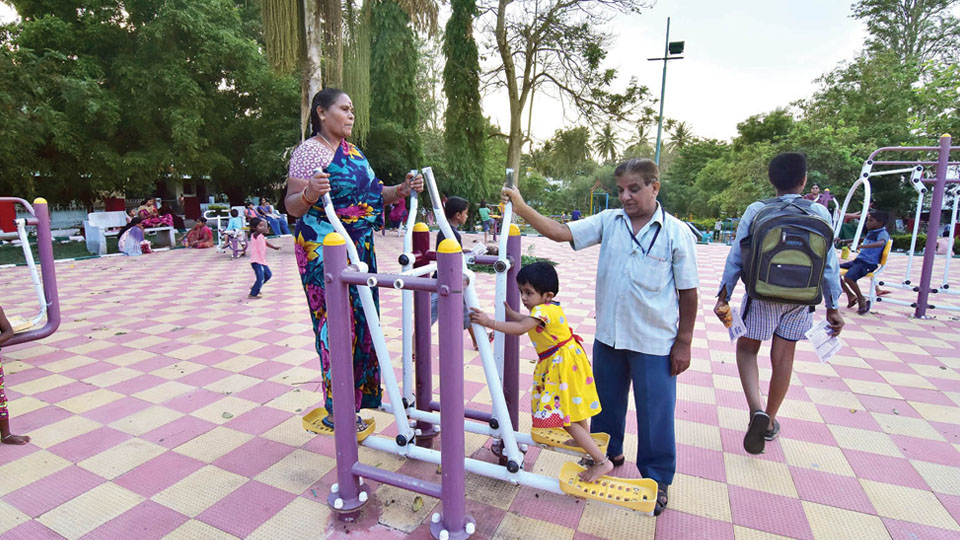 Open air gyms in several parks across city are a big hit. The Mysuru City Corporation that set up first such gym at a park near Dr. Puttaraja Gavai Stadium in J.P. Nagar received overwhelming response from the public and now every Corporator or MLA is demanding gym equipment inside parks within their jurisdiction. Some of these open gyms have a good view where health freaks make a beeline in the early hours of the day or in the evenings to get their daily fitness dose as well as enjoy the gentle breeze while working out. This Weekend Star Supplement takes a walk around such parks where fitness is offered for free.

Gyms with a Green view

It’s 5.30 pm on a weekday and many flock to parks near their homes while a group of older men and women make their way to the open gym. It is a popular facility in parks that have gymming equipment and people wait in turns to get a chance to exercise and shed that extra fat. And these gyms are packed to capacity on weekends and holidays.

Parks are the city’s new gyms. In a country where lifestyle diseases are a growing concern, easy access to neighbourhood parks with fitness equipment seems almost too good to be true. These gyms introduce people to this truly holistic fitness experience inside parks with state-of-the-art exercise equipment.

These free park gyms offer fresh air when compared to gymming inside the four walls. Studies claim that exercising outdoors has additional health benefits which help lower blood pressure and stress levels. According to a recent study, exercise in natural environments was found to be linked to greater feelings of revitalisation, increased energy and positive engagement.

A big hit among denizens

Open air gymnasiums that have been set up by Mysuru City Corporation (MCC) two years back has turned out be a big hit. More than 30 parks have such gyms and a majority of them are in Krishnaraja Assembly segment and others in Chamaraja segment that have been developed under MLA Local Area Development Fund.

MCC has installed 6 to 11 equipment depending upon the size of the park at a cost of Rs. 2 lakh to Rs. 9 lakh.  However, visitors have to train on their own as there won’t be any gym instructors.

Many Mysureans are ditching air-conditioned gyms and switching to open air gyms for better health as lack of exposure to sunlight due to indoor work culture is a leading cause for vitamin ‘D’ deficiency among many working professionals. Open air gyms have given them an option to work out in the open and soak in sunlight.

With gyms under private ownership unaffordable for many, MCC developed this concept of open air gyms which was first introduced in New Delhi. Sources told Star of Mysore that the first such gym was developed at a park near Dr. Puttaraja Gavai Stadium in J.P. Nagar and four workout machines were installed.

Following overwhelming response, MCC introduced gyms in other parks also. There are more than 416 parks in all 65 wards. Though MCC has received applications from Corporators and MLAs to set up open air gymnasiums in their parks, MCC is not able to meet their demands owing to lack of funds, scarcity of staff to maintain parks and gymnasiums.

These are user-friendly with easy-to-operate equipment. It won’t require any shelter and can endure any weather. MCC has also set up such gymnasiums in the open space under High-Tension lines in Brindavan Extension near Gokulam and turned such areas into parks with walking paths for residents under Atal Mission for Rejuvenation and Urban Transformation (AMRUT).

As about 20-km of fenced open spaces under High-Tension lines are left unused, the MCC has developed parks in Ramakrishnanagar, Bogadi, Hebbal, Nivedithanagar, CFTRI Layout, and N.R. Mohalla.

When the city’s first open gym was established at Puttaraja Gavai Park in J.P. Nagar, there were not many takers for it. But within a few days, the gym had a steady stream of enthusiasts. Now around 500 persons including women, children and elders exercise in the gym regularly.

“This simple, fun and engaging approach to exercise in open air is helping residents directly address obesity epidemic. We started it on a pilot basis and received tremendous response from the public. Now we are looking to expand it to other parks and open spaces across the city,” says MCC Commissioner Shilpa Nag.

The best part is that there are no time restrictions. “I step out of home whenever I get the time off my toddler and take a quick walk along and find time for some workout,” says Poojitha of Sharadadevinagar. For many like Poojitha, open air gyms have come as a blessing. Easy and free accessibility to these gyms may even entice the uninitiated residents into leading a healthier lifestyle.

Interestingly, it is not just the middle-aged or senior citizens who are taking to these open air gyms. While a majority of youngsters still prefer high-powered and air-conditioned gyms, a good many of them are seeking to make the best of these open fitness zones that is full of light and open air.

The greenery surrounding you is very refreshing. I usually take a 20-minute walk and then head to the open gym area for an hour’s workout,” says Prasannakumar, a 21-year-old resident of Gobbalimara Circle in J.P. Nagar and a regular visitor to Puttaraja Gavai Park.

For senior citizens, particularly, these gyms have helped in expanding their physical outdoor activities. “Earlier, I used to only go for walks. Now I spend time doing mild workouts. I feel much lighter and energetic,” says 62-year-old Lakshmidevamma, a resident of Saraswathipuram and a regular visitor to Javaregowda Park.

One of the main issues in open air gyms, however, has been maintenance. Often, fitness freaks unknowingly damage the equipment by improper handling.

“It is a great initiative by the MCC and is always enjoyable to work out in the open. I left my indoor gym and am now working outdoors. It is more cheerful and I can see that the authorities are not maintaining the equipment well,” said Umesh of Gokulam.

“We have introduced open air gyms and many people are benefiting from them. We need to ensure quality service and we are taking steps to that effect. There is a need for proper maintenance of fitness equipment for which we have decided to take the help of an agency,” said an MCC official.

Closed-door gyms require electricity, regular maintenance and other facilities while open gyms don’t have these constraints and they can be used by everyone. There’s no facility for physical exercise for middle-aged persons, children and senior citizens. Youths who can afford commercial gyms go there but others cannot. For such people, an open gym will be helpful, he added.

Lauding the efforts of MCC, retired bank employee Narasimhaswamy said that open air gymnasium was one of the best ideas to be implemented. “It helped me to cure back pain. Instead of paying hefty fee to private gyms, elders and women can gain benefit from these gyms,” he said.

Corporator SBM Manju said that the gym at Brindavan Park is a hub for walkers and joggers and caters to fitness needs. People of all ages are making use of the facility. “Residents of my ward are demanding such gyms in other parks.  Now, all Corporators want to have open gym facility in their wards. Considering the demand, MCC had sent a proposal seeking funds from the government,” he added. Being an MCC-nominated Member to MUDA, Manju said that he was also making efforts to bring funds to set up gyms from MUDA.  Focus will be on development of spaces under High-Tension line as parks.