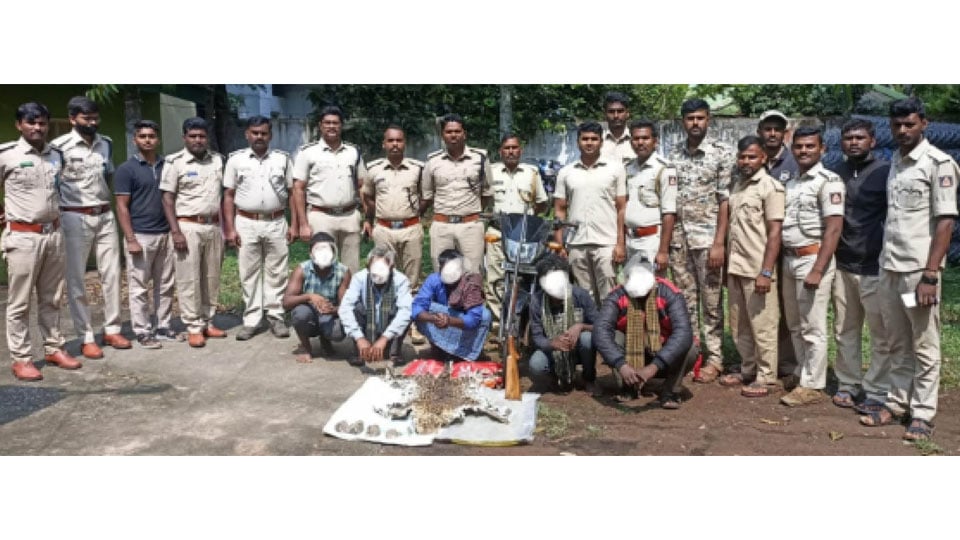 Five held for poaching leopard and trying to sell its pelt

Hanagod: The Forest Department officials and staff have arrested five persons, who had killed a leopard in Nagarahole National Park and trying to sell its pelt and have recovered the leopard pelt and four chopped legs of the leopard from them.

The Forest staff have seized a single barrel gun and a two-wheeler used for the crime.

While four of the arrested poachers belong to various tribal hamlets in Hunsur taluk, the fifth poacher is from Abbur near Hanagod and the Forest staff have launched a hunt to nab others, who have gone absconding.

After poaching the leopard in Nagarahole, the accused had skinned the animal and had chopped the legs.

Acting on a tip off that a person was trying to sell leopard pelt and four legs near Kademanuganahalli Cross on Hanagod-Panchavalli Main Road in Hanagod hobli, the Forest Department personnel raided the place and arrested the accused.

Based on the information provided by him, the Forest personnel arrested four more accused. All the five accused have been remanded to judicial custody.

Hanagod Karnataka Forest Department Nagarahole National Park
World Cartoonists Day in city on May 5
Oxygen tragedy at Chamarajanagar District Hospital: One year on, families of 12 victims yet to get relief