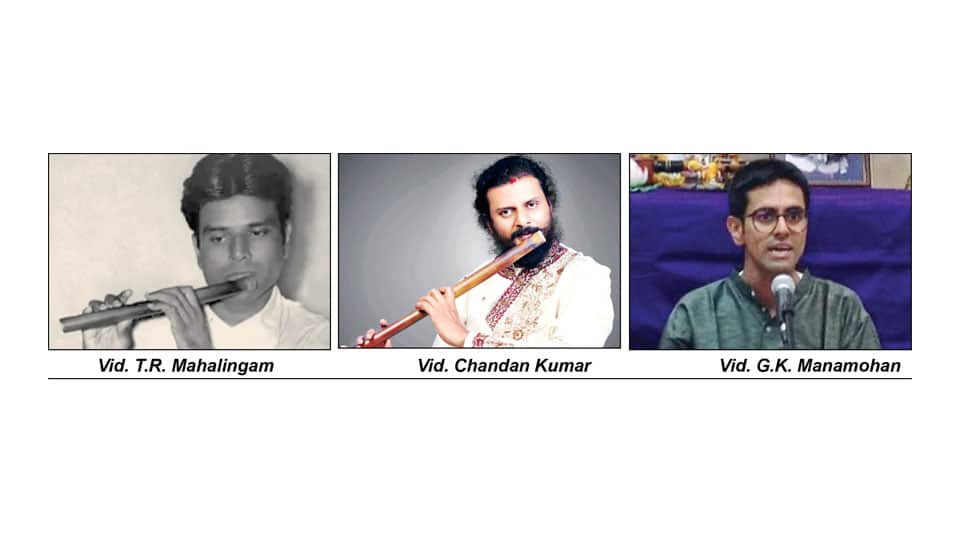 Jagannath Shenoy of Mangalore Ganesh Beedi Works will be the chief guest. Sabha President Sridhara Raj Urs will preside. On the Occasion, Mahaligam’s portrait will be unveiled and philanthropist Dr. N. Chandrashekar (Aditya Adhikari Hospital) will be honoured. Also, website of the Sabha designed by M.K. Ananda Raje Urs and his staff, Newline, Bengaluru, will be inaugurated.

Then follows flute recital by Vid. Mysore A. Chandan Kumar. He will be accompanied by Vid. Keshava Mohan Kumar on violin, Vid. A. Radhesh on mridanga and Vid. Shamith Gowda on ghata.

Also, a Karnatak Vocal Music Concert by Vid. G.K. Manamohan has been organised on Nov. 8 at 6 pm. He will be accompanied by Vid. Sumanth Manjunath on violin and Tumkur B. Ravishankar on mridanga.

Devaki and started learning singing from his maternal uncle Jalra Gopala Ayyar, who ran a famous music school. At age five, he observed other boys playing the flute and secretly, against his father’s wishes, he picked up a flute and learnt to play the Viriboni Varnam entirely by himself.

His first concert was in 1933 at the Thyagaraja Festival in Mylapore, at the age of seven. At the concert, two stalwarts in the audience, Parur Sundaram Iyer and Musiri Subramania Iyer, were so impressed that they left the concert to bring ponnadai (shawls) for him. Mali was the Founder of the popular style of flute playing followed today by the Karnatak flautists. Before Mali, the style of flute playing was called Sarabha Sastri style, popularised by Sarabha Sastri’s disciple, Palladam Sanjeeva Rao and did not have any gamakas and involved playing the flute in discrete bursts. Mali introduced new fingering techniques and a style of continuous flute playing that provided gamakas and an ability to better imitate the human voice. In Karnatak music, instrumental music seeks to emulate vocal singing which is considered the ideal, and it was only with Mali’s style did all the nuances of Karnatak music become possible to be expressed on the flute.

According to his disciple Sundaram, he also enjoyed challenging his accompanists with difficult musical progressions, and tricking them into making mistakes. The only accompanist he gave full rein to was the elder violinist Papa Venkataramaiah, whom he considered his mentor. After moving to Bengaluru in 1955, he went to seclusion in 1958, playing very infrequently. From 1980 to 1985, he lived in the United States, performing for $2000 per concert. He returned to India and died of a cerebral haemorrhage in 1986 at the age of 60.