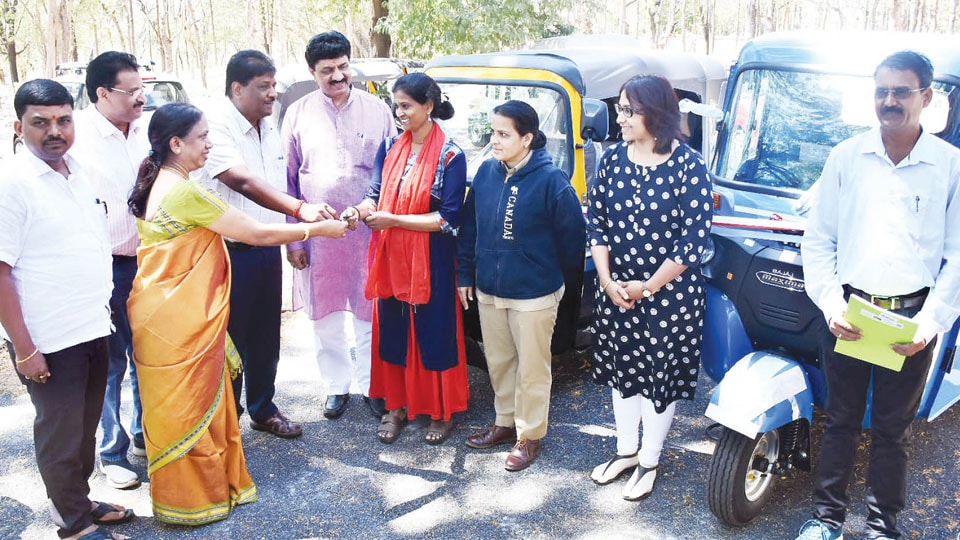 ‘Focus on education to become self-reliant’

Mysore/Mysuru: Regional Commissioner G.C. Prakash has called upon women to not only get good education but also to live independently by concentrating towards becoming self-employed. He was speaking after distributing autorickshaws to two women beneficiaries at a function organised by Yuva Chintana Foundation, Bengaluru, in association with the Department of Women and Child Development at the Office of Regional Commissioner in city on Friday.

Prakash said, parents must educate their girl children as knowledge was priceless and none can snatch it. Of late, women were seen in all fields. It was happy to note that Bengaluru-based organisation has been conducting women empowerment programmes and two women from Mysuru have been gifted the three-wheelers to  become self-reliant.

K. Padma, Deputy Director, Department of Women and Child Development, said women who wish to become self-employed, may submit application seeking training in tailoring or beautician courses. It was high time they thought of other professions too. Already, 30 women from Mysuru’s State Home had been appointed as Anganwadi workers. Now, three women from State Home have come forward to undergo training in driving organised by Yuva Chintana.

Former MLA N.L. Narendra Babu said, women can take responsibility if she was educated. They have seen women driving autorickshaws in cities. The Government must consider issuing Driving Licence to PU-passed youths.

Anupama Gowda, Head, Yuva Chintana Foundation, said thousands of families suffered due to country-wide lockdown last year, and many have lost jobs. The condition of single parent was even worst. In view of this, the Foundation plans to identify women in difficulties and impart training in driving autorickshaws, goods autorickshaw and two-wheelers. This will help them to deliver food ordered online.