Home » Columns » Abracadabra By K. B. Ganapathy » Following the scent of R.K. Narayan 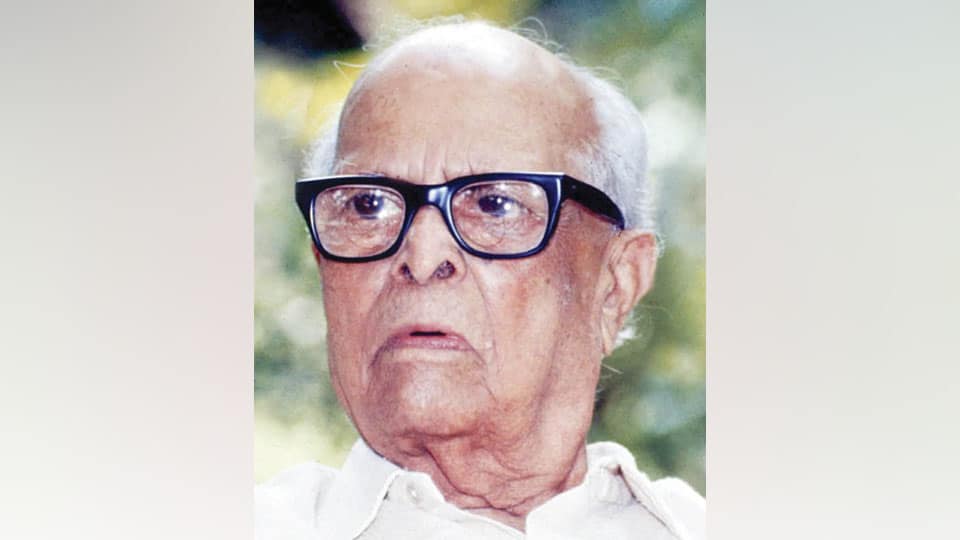 Following the scent of R.K. Narayan

From my memory book, I learn that I read ‘Guide’ by R.K. Narayan during the first week of November 1962. It was the time I was obsessed with Somerset Maugham. Naturally, I could not resist comparison, however odious it may be. Narayan appeared to me like a neophyte in front of Maugham.

Earlier, I had read at random ‘The Financial Expert’ and loved the tragic-comic character of Margayya immensely and had an urge to communicate with the author and in fact wrote him a letter after securing his address from ‘who is who’ among authors or some such book. I did not deserve a reply or the letter did not reach him.

Yesterday, I got scent of his visit to Manasagangothri’s English Department and kept my line of communication tuned-up. The moment I got the information about Narayan’s arrival I rushed. There he was in flesh and blood. As ordinary looking as you and I. Both in appearance and demeanour. Very unassuming for all his name, fame and talent. He was a surprise. In fact he looked like one of those simple characters from his own novels.

He obviously suffers from long-sight because he wears thick concave glasses. A receding pate with grey mane skirting it, short beak of a nose, an average height and girth make up his physical appearance. If I was ever foxed by appearance it was yesterday. All in all I loved the man and his words (both spoken and written).

Now compare this gentle, creative genius with that bovine, haughty young literary upstart Dom Moraes. Perish the thought. I remember attending one of his ‘meet the students’ circus in a South Bombay College. He came there with his latest acquisition Leela Naidu. After the initial flattering platitudes by the Lady Principal, the honourable guest mounted the platform, his face impassive, flicked a 555 cigarette, lighted it, puffed it and then lo and behold the first thing to come out of his loose lips was a puff of grey smoke. More on our own, inimitable Narayan tomorrow and nothing on that Moor from Goa. —PUCK

It is said that when one fails in all ventures, he becomes a writer. If this is so, that was what happened to our own celebrated writer and novelist R.K. Narayan (RKN). According to what he told a group of post-graduate English students of Manasagangothri a couple of days back, he was turned down a Tutor’s job in the Maharaja’s College. Of course, what was Maharaja’s College’s loss was the literary world’s invaluable gain. It is no matter of conjecture what a great loss it would have been. Thinking of loss, Narayan mentioned that by dealing with film ‘goondas’ a conscientious author like him would lose both his morals and money. He  was very bitter about his experience with film people. Perhaps Dev Anand had helped him gain this unsavoury experience.

I remember myself turning hysterical, laughing like one possessed, while reading his article entitled, I think, ‘Misguided Guide’ wherein he had dealt in delightful detail about circumstances, situations, people and all that happened in the selling of the film rights of his novel ‘Guide’ to Dev Anand and thereafter during shootings. I can never forget till my death this particular incident.

Once I was tickled into laughing, every second line I read with moistened eyes (I start getting tears in my eyes while laughing) only added to the humour which was still being enjoyed by me. I was laughing in fits and starts like a lunatic, became a nuisance to others and I was not in control of myself at all. A point came when the lady librarian requested me to leave the place and return after I regained my balance. Readers may feel that I am exaggerating. No. This happened in the U.S.I.S Library, Bombay and the article had appeared in the ‘Life’ magazine.

I have since read a few pieces by Narayan published in ‘The Illustrated Weekly of India’. But they were all flat. Narayan will never excel that one piece which was packed with humour, sarcasm, wit and bite. Oh, Narayan, Narayan, won’t you do it again?— PUCK

According to a book I was reading last Sunday afternoon, among the peoples of the ancient world there are three who bequeathed a legacy that is living power at the present day. Those three peoples are the Hebrew, the Greek and the Roman.

The book “The Legacy of the Ancient World” says that the creations of their genius, namely the Hebrew prophecy; the philosophy, poetry and sculpture of Greece; the law and political organisation of Rome are a heritage of lasting inspiration to mankind. Agreed.

But what happened to Hindus? We have lost out to others? So I closed the book and did some introspection. Think of Vedas and Upanishads. They may date back to periods beyond the genesis mentioned in the Old Testament or the famous Dead-Sea scrolls. Do they mean nothing to the author of this book? Perhaps I am being parochial in outlook.

Have not our ancient sages and saints bequeathed any legacy good enough to be mentioned along with the Hebrews, Greeks and Romans?

Well, I am not worried. I shall contact our own history genius Mr. P.N. Oak, who is a Past-Master in re-writing history. —PUCK

Note: In the beginning Abracadabra column did not carry a headline like in later days. For some years it only had a pen name ‘PUCK’ for its author.—Ed