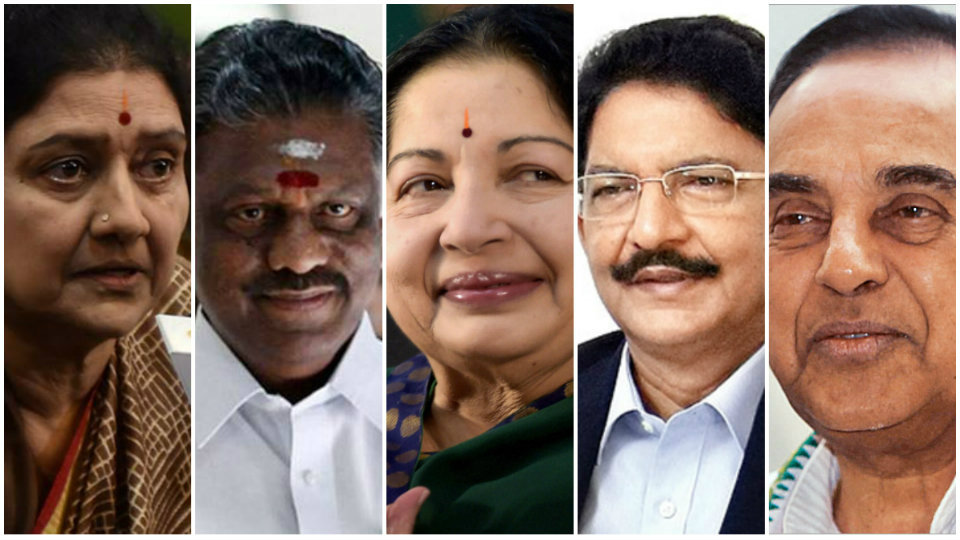 Jayalalithaa dead seems more dangerous to Tamil Nadu politics than Jayalalithaa alive. She ‘officially’ died on December 5, 2016 and O. Panneerselvam continued as in-charge Chief Minister, a post he was asked to hold when Jayalalithaa was hospitalised. He was like Gulzarilal Nanda (remember?) who was the stop-gap Prime Minister when Jawaharlal Nehru and Lal Bahadur Shastri died. He could never become the Prime Minister. May be in  hindsight I guess this will be the fate of  O. Panneerselvam.

Once the mourning period was over, the AIADMK Legislators gravitated towards Sasikala Natarajan, whom Jayalalithaa Amma’s MLAs longingly began to address as Chinnamma in great awe and reverence. Thus there was no difficulty in Chinnamma being crowned as the General Secretary of AIADMK, a post more powerful than the titular President of the party. Hence it was either a convention or a provision in the AIADMK Constitution that whoever is elected or selected as the General Secretary of the party will become the Chief Minister; the consensus of the MLAs, obviously, taken for granted! Which was why Jayalalithaa became the Chief Minister every time AIADMK won the election.

So far every thing looked hunky-dory for the AIADMK with O. Panneerselvam meekly submitting his resignation on Sasikala Natarajan becoming the General Secretary, paving way for the latter to become the Chief Minister as a matter of right. That the maverick BJP Rajya Sabha member and Chanakya in the BJP camp Dr. Subramanian Swamy is standing like the Rock of Gibraltar behind Sasikala is a matter to be taken seriously by all those now supporting O. Panneerselvam who has become a turncoat and a weather-cock. Seen as a servile person, he has no mind of his own and hopes to win in his final political gamble at the cost of splitting  his Amma’s AIADMK; no matter advantage is for DMK.

In between, the Governor of Tamil Nadu, the Acting Governor Vidyasagar Rao, is surely playing dirty. For what purpose God only knows. Not surprisingly, the news is that Dr. Subramanian Swamy has approached the Supreme Court probably asking for a direction to the Governor to act and end his act of dithering.

Some say, the learned Governor is looking to install a stable Government, hence the delay. But then, where is the guarantee that the person whom he will finally ask to form the Government will give a stable Government? At present, he is simply encouraging horse-trading of MLAs and that could be seen in the manner a few MLAs who have joined O. Panneerselvam. Some MPs too have switched loyalty to Panneerselvam but that will not make any difference to the chances of either of the two rivals.

READ ALSO  Musings on Indian Democracy ...and The Common Man

Moreover, O. Panneerselvam has already submitted his resignation as Chief Minister and he is only a care-taker Chief Minister now — a lame duck Chief Minister. When such is the case, the Governor should have discharged his Constitutional duty by inviting whoever, among the two, presented him a list of MLAs with majority support.

In the present case, undoubtedly, it is Sasikala who has the support of the majority of MLAs. It is no concern of the Governor or anybody, except the family members of MLAs to complain that these MLAs were hijacked and kept captive in a resort incommunicado by the General Secretary Sasikala Natarajan. Of course, a case too has been filed in this regard and the Police have said these MLAs are not kept in the resort under duress or as captives. Therefore, it is morally and legally the duty of the Governor to call ‘Chinnamma’ and administer her the oath of office  on condition that she should prove her majority through a vote of confidence in the Assembly at its first meeting or on the date specified by the Governor as contemplated in the path-breaking S.R. Bommai case.

The fact that there is a case about Disproportionate Assets (DA) filed against J. Jayalalithaa (Amma) wherein Sasikala is also an accused and the Supreme Court is all set to deliver its judgement which if goes against her, then Sasikala would have to step-down as the Chief Minister and go to jail, hence it is not correct to make her as Chief Minister seems to be the opinion of some or even of the Governor. But, it is just illogical and crap. If she loses the case and gets disqualified, she, as AIADMK’s General Secretary, can still ask the MLAs to choose their leader for the CM’s office; Or like Jayalalithaa did on every such occasion, Sasikala may choose one of her liking whom other MLAs may meekly accept.

READ ALSO  Dr. Satish Rai as I knew him

It is better to cross the river on reaching it than worrying about  crossing it even before the journey has begun. Well, what if the river itself is not there? What if she wins the case?

In politics, nothing is stable nor constant. Decision has to be  taken amidst the prevailing situation or even chaos. Otherwise the Governor will be guilty of destabilising the State of TN.

Hope, wiser counsel will prevail and the Governor will act no matter he invites O. Panneerselvam. But  for God’s sake he must act even as other political parties are busy fishing in Tamil Nadu’s troubled political waters, not Cauvery water!

Understandably, we see the judgement of the Supreme Court’s 9-member Constitutional Bench in the famous S.R. Bommai Vs. Union of India Case (1988) being invoked in connection with the Tamil Nadu ‘political imbroglio.’ Though it primarily dealt with the use or misuse of Article 356 of the Constitution while declaring President’s Rule in States, the guidelines of the Supreme Court that emerged, among others, which is germane to the present Tamil Nadu situation, is the one which said that the majority enjoyed by the Council of Ministers (CoM) shall be tested on the floor of the House.

I wish the Supreme Court had specified the time limit within which the Floor Test should be done. It is the absence of such a guideline on the ‘time limit’ which is now enabling the Governor to dodge taking a decision and the leaders of the rival groups to indulge in unethical practices of horse-trading and keeping the MLAs captive in resorts.

NOTE: As we went to the press, the Supreme Court has delivered the judgement in the DA case holding Sasikala guilty. Is this the end of the political road for her? Time alone can tell. For now, O. Panneerselvam becomes the winner by default. But a fluke horse can also emerge from Sasikala’s camp. Never say die in politics. Sympathy factor always works in favour of the victim in politics.