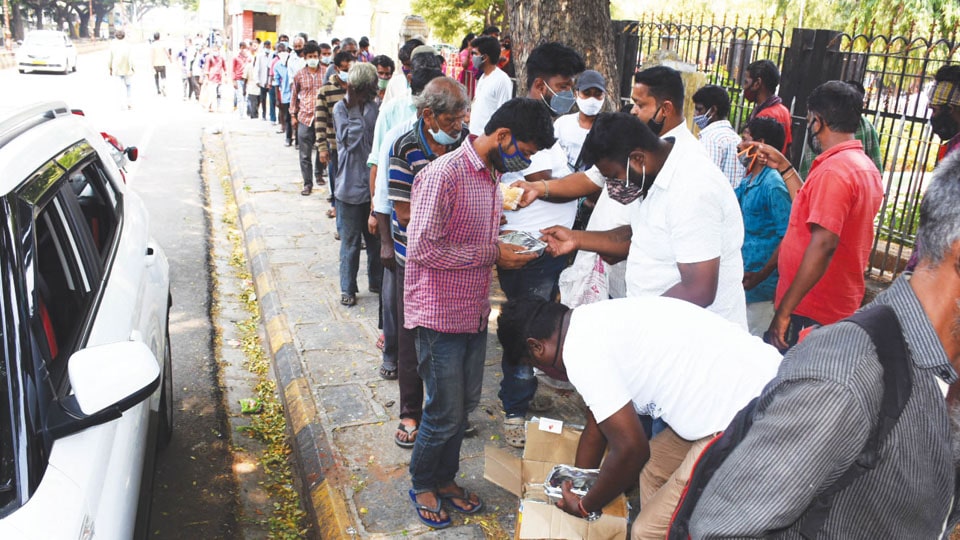 Food distribution allowed only at Doddakere Maidan and J.K. Grounds

Mysore/Mysuru: With inputs that unhindered food distribution at public places is resulting in rampant spread of the virus, the Mysuru City Corporation (MCC) has ordered mass distribution of food packets only at the spacious J.K. Grounds and Doddakere Maidan in city.

In an order issued on Thursday, the MCC said that henceforth food distribution will be allowed only at these two designated spots as a precautionary and safety measure. However, food packets distribution by Ahara Akshaya Jolige in front of  Government Ayurveda College will continue at the same spot.

Donors have been distributing food packets daily in front of K.R. Hospital and CADA Office on Sayyaji Rao Road since the lockdown was enforced. As it was noticed that people used to vie with each other for getting food packets by throwing all COVID guidelines to the wind, the MCC decided to allow distribution of food only at J.K. Grounds and Doddakere Maidan, with effect from May 27. The MCC has erected pendals at J.K. Grounds for food distribution and has issued directions on ensuring COVID appropriate behaviour among people who line up for getting food packets.

About 8 to 10 donors used to distribute food in front of K.R. Hospital, which benefited hundreds of shelter-less and other destitutes every day. Likewise, hundreds of people benefited from food distribution that used to take place in front of CADA Office on Sayyaji Rao road. However, following reports that people were giving a go by to COVID guidelines and also about a few people throwing food in the vicinity due to dislike of food served, the authorities, taking note that it endangered the safety of public, have ordered stoppage to food distribution at these two points.