Mysuru: A two-day workshop was organised in city recently to build a rapport between mahouts and Forest Department personnel. More than 40 mahouts from across the State participated in the workshop that sensitised the officials regarding the plight of mahouts. The event was also a platform for mahouts to air their grievances.

The workshop was organised by Asian Elephant Support, Karnataka Forest Department and De Paul First Grade College, Mysuru, at KSTDC Hotel auditorium. This is for the first time such a workshop is organised in Mysuru and mahouts from nine elephant camps including Balle, Mathigodu, Dubare and Sakkrebailu attended and exchanged their views.

Principal Chief Conservator of Forests (Wildlife) C. Jayaram inaugurated the workshop and said that Karnataka has been in the forefront of elephant conservation and the State has been guiding other States in the matter of conservation, training and nurturing elephant population.

Karnataka has the highest number of elephant population and mahouts, kavadis and elephants are popular for capturing and taming wild elephants.

“Our elephants are much sought after by States including Maharashtra, Madhya Pradesh and Chhattisgarh where there is a considerable wild elephant population that harm human settlements,” he said.

Lauding mahouts, kavadis and Department veterinarians for their work outside Karnataka, Jayaram said that the State government has worked out various policies for the welfare of the mahouts and kavadis. Listening to the woes aired by mahouts and kavadis, the officer directed his subordinates to resolve some of the issues that could be solved immediately.

Additional Principal Chief Conservator of Forests Ajay Mishra called upon mahouts and kavadis to give up vices like drinking and smoking. Elephants are sensitive in nature and they have to be looked after like children. “Along with safeguarding the elephants, the mahouts and kavadis must take care of their families. They have the responsibility of keeping the elephants fit and engaged so that whenever there is an emergency work, the elephants must be ready to take on the job,” he said. Elephant expert Dr. Ajay Desai outlined the finer aspects of elephant behaviour, its food needs and nutrition. Elephants are more intelligent than human beings and special care has to be taken at elephant camps, he said. 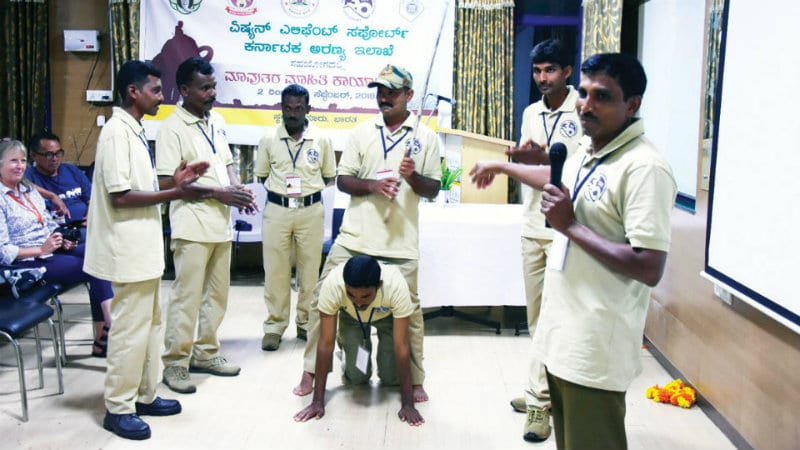 The workshop also dealt with programmes that implement regular health checks and treatments for elephants in remote camps, meeting medical, nutritional, housing and social needs of old elephants and seeking solutions to local issues of human-elephant conflict where both human and elephants benefit from sustainable practices.