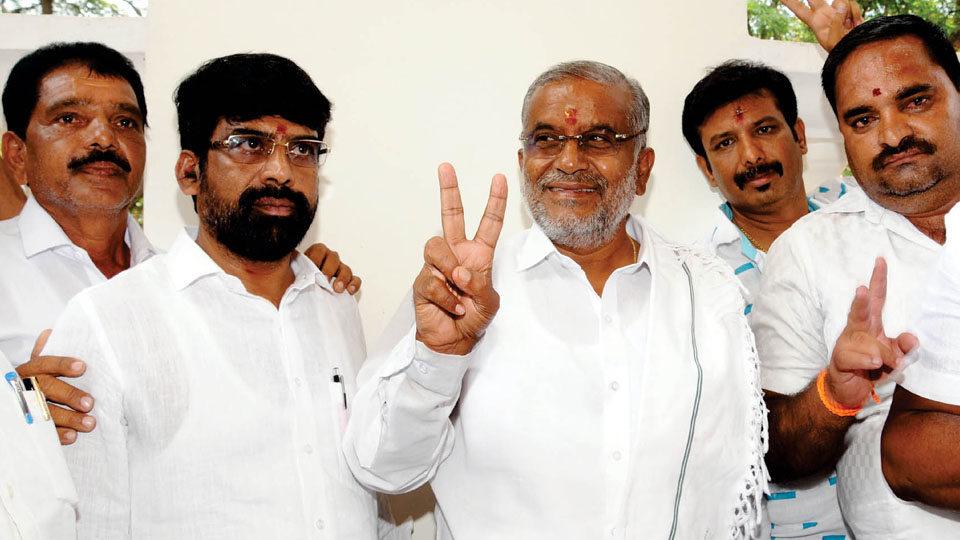 When it was clear that once friends, Siddharamaiah and G.T. Devegowda (GTD) will be face-to-face in a battle of prestige at Chamundeshwari, political pundits expected that GTD will win by a narrow margin and there will be a neck-to-neck fight. Though it was clear since beginning that GTD will win, few could have imagined the outcome of this “David takes on Goliath” battle that surprised even those who predicted a close fight.

GTD, a former friend of Siddharamaiah, is in active politics since 1972. Even though he maintained a low-profile for a long time, he was active in the co-operative movement. In the 1998 by-polls, he entered the Assembly from Hunsur on a Janata Dal ticket. He was elected from the same Constituency in 2004 as a JD(S) candidate. 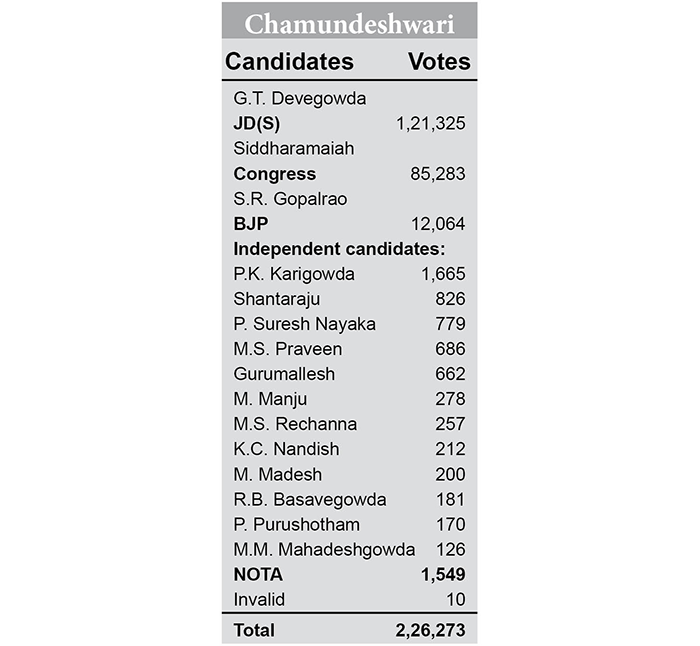 A native of Gungralchatra under Chamundeshwari Constituency, he shifted to Chamundeshwari in the 2013 polls, when he defeated ex-MLA M. Sathyanarayana (Congress). His association with Siddharamaiah spans over 23 years, from 1983 up to 2006, when Siddharamaiah defected to the Congress. Devegowda remained in the JD(S), but joined the BJP in 2008 and unsuccessfully contested from Hunsur. In 2013, he returned to JD(S) fold.

So, why did Siddharamaiah lose?

Political analysts say that Siddharamaiah lost touch with the ground realities as he was always surrounded by sycophants. Initially, the people lost contact with him, and finally lost confidence in him. This was evident even during his tour in the villages of the Constituency. Some villagers reacted rudely to his advances, publicly.

Though intelligence reports recommended against him contesting from Chamundeshwari, he overruled their inputs and wished to go ahead in over-confidence. In the end, and at the last moment, he contested from Badami where he won against B. Sriramulu of the BJP. Siddharamaiah polled 67,599 votes while Sriramulu polled 65,903 votes. The victory margin was 1,696, reminiscent of the margin in Chamundeshwari in 2006 where Siddharamaiah won by a wafer-thin margin of 257 votes against S. Shivabasappa of the JD(S).
People have rejected Siddharamaiah: GTD

Speaking to Star of Mysore, GTD said he dedicated his victory to the people of the Constituency. “Siddharamaiah’s arrogance towards people and negligence towards the Constituency made my path easy,” he said. “I have been a close associate of Siddharamaiah since 1989 and have supported his every move. After rising in terms of power, he ignored the people who worked for him and today he paid the price by losing Chamundeshwari and winning Badami by a slender margin,” he said.

Devegowda said, after Siddharamaiah shifted to Varuna segment in 2008, he never cared for the people of Chamundeshwari. “Having represented the Constituency for a long time, for five terms, he could have done wonders. At least after becoming Chief Minister, he could have taken steps to develop the Constituency,” said Devegowda.

“Chamundeshwari was the Constituency that gave Siddharamaiah a political rebirth. Unfortunately, Siddharamaiah forgot all of them and he offended and ill-treated senior leaders like V. Sreenivasa Prasad and A.H. Vishwanath. While people of Chamundeshwari expected development, Siddharamaiah, despite being the CM did not come to Chamundeshwari even once in 10 years. How could he expect people to vote for him,” GTD asked.