Home » Elections 2018 » People had given me five years leave: Ramdas 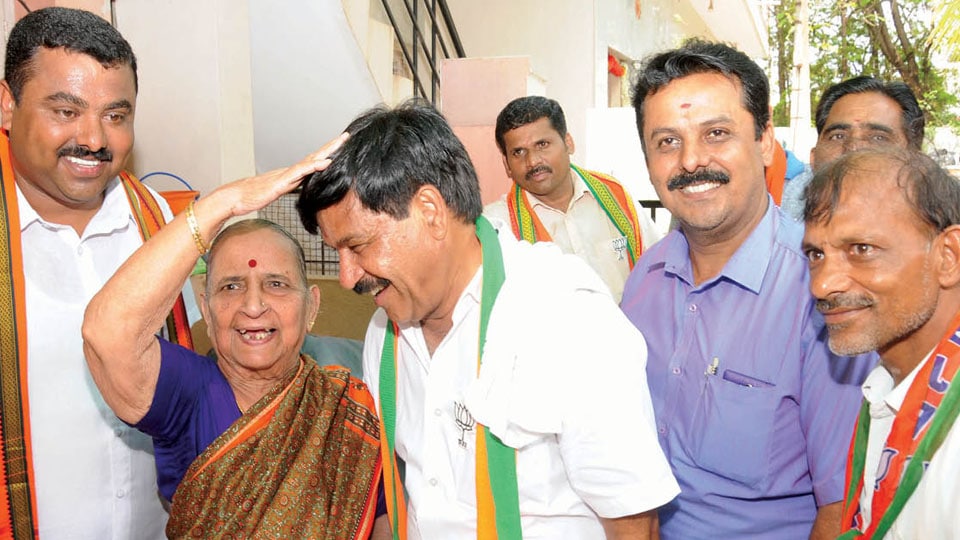 People had given me five years leave: Ramdas

Mysuru: “The relationship between my voters and myself is not just political, it is more an emotional bonding. They had given me five years leave. This time with their blessings I will bounce back to power again. I will garner more votes than in 2008,” said former Minister and K.R. Constituency BJP candidate S.A. Ramdas.

Speaking to Star of Mysore, while he was canvassing in the Constituency’s 6th Ward, Ramdas said that the people here had always treated him as one of their own who is contesting an election and not as a politician who is one among them.

“When I go seeking votes, they invite me inside their homes, perform puja and give me prasada. 87-year-old Shantamma who has lost her son, treats me like her own son, advises me not to falter and blesses me. Similarly,108-year-old Sampath Iyengar notices me passing his house, calls me back and says that his health is deteriorating. He says that he would vote for me, see that I win and occupy a high position and blesses me,” he said.

He also advised me to distribute guides to tenth standard students and fight for reduced admission fees in schools. Hence, when I come across such people who talk to me freely, offer suggestions and want me to do well, my heart is filled with joy, he said.

People in the Constituency remember my contributions as a Minister. I introduced generic medicines, under the borewell-less scheme, I was instrumental in getting 24X7 Kabini water to houses in Kuvempunagar, Vivekanandanagar, Ramakrishnanagar and other layouts and distributed 8,600 Ashraya houses which people have not forgotten, he said.

The current MLA M.K. Somashekar, who during his five year tenure and with CM Siddharamaiah’s help could have done so much for the Constituency, but he has failed the people. They now realise how much work I had done and what is his contribution in the last five years, he said.

Five years leave: The people of the Constituency had sanctioned me five years leave. However, I have done a lot of work in spite of not being politically active. I have worked hard for the welfare of the unorganised workers under the banner of Bharat Informal Workers Institute, he said.

Driving Licenses have not been issued to many auto drivers as they have not passed SSLC and this includes more than 67 lakh in the country. Once the President gives assent, the Driving Licenses will be issued freely as a Centre’s programme, he added.

Nearly 200 HIV infected children have been adopted and with the association of Germans and a few other organisations, they are being treated using Indian method of treatments and the infection rate among children is coming down considerably, Ramdas said and expressed confidence of winning with the people’s blessings this time.